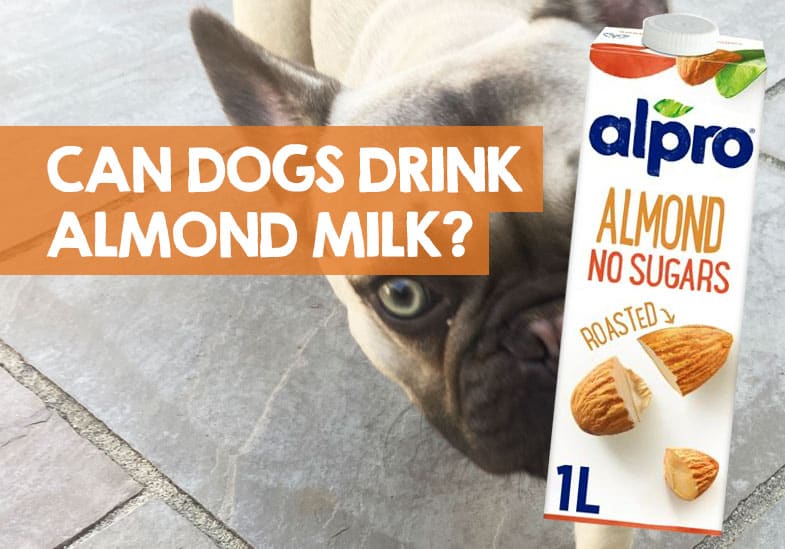 Dietary trends over the last decade have seen huge numbers of people drop dairy products from their shop. This has meant sales of almond milk have increased and it’s become more common in homes, and even some pet owners let their dogs drink almond milk.

But is almond milk safe for dogs to drink, or is there a hidden danger in giving it to a canine? If you’re unsure whether almond milk toxic to dogs, please read the following guide. As usual, here’s the short answer first.

Can dogs drink almond milk? Dogs can drink almond milk safely, but in small and infrequent amounts. Almond milk is not toxic to dogs, but it is high in calories and fat so could lead to digestive issues, such as gastrointestinal problems including diarrhea.

The bottom line is almond milk is not poisonous to dogs and they can drink it. In fact, some dogs will love almond milk, particularly the sweetened variety. However, it’s important to understand what will happen to dogs that drink almond milk in large quantities as it could chance you mind about offering this treat… I explain below.

You will find out which variety of almond milk is safe for dogs, sweetened or unsweetened. Plus, what this means for other almond milk flavored foods such as yoghurt, ice cream, and whipped cream.

Is almond milk safe for dogs (or toxic / poisonous)?

Plant-based milk replacements have become very popular, in fact, sales of milk substitutes rose by 16% in 2020 and 2021. It’s no wonder then, that whether almond milk is safe for dogs to drink is a question asked of Doggysaurus twice this week.

If you are be tempted to share the “almond goodness” with your canine best friend. You can show them that extra love by giving them a taste of the creamy drink that leaves your taste buds craving for more… we know that in small amounts, dogs can drink almond milk.

But the million-dollar question is whether almond milk is harmful to dogs when given more frequently.

Dogs can drink almond milk. But as with every other human food, it should be given in moderation. Dogs have sensitive stomachs and different metabolism than us. So, what works for us, might not work for them.

You may ask, how small is small? To answer this question, let’s do a bit of math.

How much almond milk can my dog have?

You’re might be familiar with the 10% treat rule. Vets often say that any treat we give our canine dogs shouldn’t contain more than 10% of their daily calorie requirement.

Calorie counting may seem odd for a dog, but their dietary needs are more fragile than we as owners tend to think. Owners won’t often pay too much attention to the calories included a drop of almond milk, but it’s important if you want to keep your dog healthy.

These values were retrieved from the Pet Obesity Prevention Association.

That means, if your dog needs 450 calories from their daily diet, how much almond milk you can give your dog should not exceed 45 calories daily (you must always check the product label to confirm the treat’s calorie content).

Let’s now look at almond milk as a treat and how it can be safe for dogs to drink when limited.

A small cup of unsweetened almond milk has around 40 calories. So, if you decide to treat your 400-calories-per-day dog to this milk, the ideal quantity should be less than a small cup.

Almond milk must never be part of your dog’s everyday menu too. In fact, once a week if that is really what you should limit a dog almond milk intake to. Leaving out a bowl of almond milk sitting around so your dog can slurp whenever they feel like it is an absolute no-no.

Also, it shouldn’t replace your dog’s main meal — for instance, letting a dog almond milk for lunch instead of their usual dog lunch meal.

Dogs can quickly put on weight.

If we look at two very different breeds, it will give you a better idea how almond milk could hurt a dog in large amounts.

Based on those numbers, here’s how many calories a cup of almond milk from some of the leading brands could impact your dog’s health.

Whilst those calories numbers are particularly high, you can see how it might soon stack up if your dog drinks it in replacement of water.

How to let your dog drink almond milk safely

If you’re introducing your dog to almond milk for the first time, start with the smallest amount (a few tablespoons) and closely monitor their behavior and health within the first 12 hours.

Some dogs could be allergic to almonds and their by-products like almond milk. Some of the common almond allergic reactions that dogs display include:

If the visible signs aren’t there, it can be hard to know if your dog has negatively reacted to almond milk and had a toxic reaction.

The best thing to do here is to observe the mood of your dog after drinking almond milk. If they seem unusually cranky or under the weather, that’s a sign you should stay away from the almond milk treats and take them to the vet.

Why almond milk (and which type) is safe for dogs

What makes almond milk safe for dog is, it’s lactose-free. Lactose is a type of natural sugar in dairy products like normal cow’s milk. Since almond milk doesn’t fall under the category of dairy drinks (its main ingredients are water and almonds), it lacks lactose.

Most of our four-legged companions don’t have the enzyme that breaks down lactose — lactase enzyme. Therefore, almond milk won’t give your dog’s digestive system as much of a hard time as cow’s milk.

You can be sure that if your dog doesn’t have an almonds allergy, they could safely drink almond milk without experiencing lactose digestive complications.

Talking about safety, the only type of almond milk you should give your furry friend is plain or unsweetened. Not because it has the best nutrients, but because the artificial sugars added to sweetened almond milk can mark the beginning of your dog’s health going south.

Is almond milk toxic to dogs?

Yes, some almond milk can be toxic to dogs as certain additives in sweetened or flavored almond milk are outright toxic and can poison your dog and make them poorly.

I’m talking about these four culprits:

If you won’t remember anything else from this article, let this stick in your mind: Keep off unsweetened and flavored almond milk as your dog’s treat.

Most sweetened almond milk brands have xylitol (always read the ingredients label). Even if your canine friend takes this dog-toxic ingredient in small quantities, the outcome can be potentially fatal.

Xylitol can drastically drop your pooch’s blood sugar levels, leading to symptoms like:

Xylitol poisoning also triggers liver failure in dogs and can cause death.

Not to mention, giving your dog sweetened almond milk — even if it doesn’t have the flavor extracts or xylitol as the sweetening agent — will also lead to sugar-related health problems in the future, such as dental issues, diabetes, and pancreatitis.

If you’re already feeding your canine friend a nutritious diet, giving them almond milk, all the time is simply providing them with unnecessary calories.

Most of the in-store plain almond milk has been over-processed, leaving the milk with few nutrients that can’t make a real difference in your dog’s overall health.

Unsweetened almond milk is packed with empty calories. It’s no different from junk food. So, if you make it a habit of treating your dog to almond milk every other day, they’ll develop caloric imbalances. And obesity will kick in.

Honestly, if your furry friend doesn’t take almond mild, they won’t miss out on anything.

Your dog’s high-quality diet already offers all the nutrients they need to stay healthy. Some of these important nutrients might not be present in unsweetened almond milk. For this reason, you should never substitute your dog’s main meal with this milk — this can cause serious nutritional imbalances.

Aside from that, plain almond milk has a lot of fat. Feeding your dog a large quantity of almond milk will only cause stomach upsets and loose, oily stool because of the high oil content.

Too much milk will also increase your pooch’s risk of pancreatitis, which is known to develop when a dog ingests high-fat products often.

Handy Hint: Here’s how you can comfort a dog with pancreatitis.

If you can avoid almond milk as a treat, the better.

There are no health benefits to dogs that eat almond milk yoghurt. So, it’s not necessarily good for dogs, but in small amounts won’t harm them either, providing it’s the unsweetened variety.

Most dogs can have a small amount of almond milk whipped cream providing they don’t have an almond allergy, and it’s unsweetened with no additives.

Most dogs can have a small amount of almond milk ice cream providing they don’t have an almond allergy, and it’s unsweetened with no additives.

What happens if a dog drinks almond milk?

If a dog doesn’t have almond allergies, nothing will happen if they take a small amount of plain almond milk.

How much almond milk can my dog have?

The quantity of almond milk you give your dog shouldn’t contain over 10% of your pooch’s daily calorie requirement. Plus, you shouldn’t give this amount daily, only once in a while.

Yes, that’s right. Unsweetened almond milk has no health effects if given in small amounts.

No. It’s not a must for dogs to drink almond milk because a dog’s daily diet already has all the nutrients that almond milk contains.

If you’re thinking of giving your pooch almond milk, only serve it as an occasional treat.

Most of us will agree we’re in the middle of an almond milk craze. If you’re a dog parent with a soft spot for this dairy-free drink, you’re probably wondering whether it’s okay to share the almond milk stocked in your fridge with your canine best friend.

Well, I hope I’ve answered that for you today.

As with anything you give your dog, moderation is key.