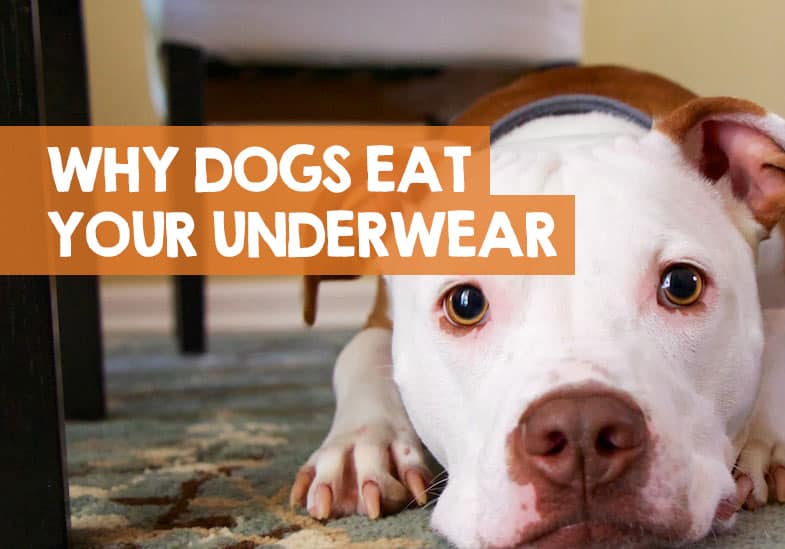 Despite our best efforts to educate our dogs to our standards, they retain elements of the wild in their genes. Left to their own devices, they will eat anything. Nevertheless, it is doubly disconcerting when they eat your unmentionables.

Dogs eat underwear for a variety of reasons. They are not discerning with respect to food, some are greedy, and others practice this behaviour as a step up the social ladder. The mischievous ones think it is a game and a source of endless amusement.

Besides the indignation and the loss of valuable lingerie, eating underwear does not indicate that your dog has a medical problem However, it can present a real danger to your pet. Most times it is ejected from its body but there is the possibility it could cause a blockage which calls for urgent medical intervention.

“The dog ate my homework” is a universally acceptable excuse. It is feasible that your dog could eat a paper exercise, an art project, and increasingly in modern times, a memory stick.

The Veterinary Practice News runs the annual ‘They Ate What?!’ x-ray competition. The subjects of these x-rays have eaten panties, bikini tops, hair clips and telephone cords, and much more. In one year, the runner-up ate 43 socks.

Dogs eating underwear does not appear to be a challenge to most of them, and some only have a problem when they have consumed half a laundry basket or a pair of extra-large bloomers.

Dogs will take your undergarments and socks off the floor, steal them from the washing line, and even out of your drawers. Your detergent is not as much of a deterrent as you would hope.

We buy our pets stuffed toys and watch with amusement, as they tear them apart. This behaviour easily transfers to underwear. Your pet will be particularly drawn to the elastic because it is chewy.

2. Your dog may be hungry

Some dogs have endless appetites. They will consume anything that will temporarily quell the gnawing hunger pangs in their gut.

3. They have a taste for underwear

As demonstrated by the sock thief mentioned above, some dogs acquire a taste for a certain delicacy and will indulge themselves at every opportunity.

Fortunately, this laundry cycles effortlessly through most dogs without incident but one poor canine needed surgery to remove eight pairs of panties from its stomach. It is not known whether these were consumed in one sitting, or over a period of time.

They will eat their own and others’ poop, seemingly with relish. Not to be indelicate but after 24 hours or more on your nether regions, your underpants assume more than a whiff of human waste. This is like caviar to your dog.

5. Perhaps your dog thinks it is protecting you

In the wild, healthy wolves and dogs will clean up after the young and the sick in their pack. This practice eliminates any odours that will lead predators to the vulnerable animals in the den.

If your underwear has traces of blood, it will trigger their primeval instincts, and they will devour it or lick at it. This is particularly true of panties worn during a menstrual cycle.

Scavengers will dig a meat wrapper and tampons out of the garbage with equal relish. The latter are dangerous as they absorb moisture and will swell inside your dog’s digestive system. The foreign object will most likely need to be removed by a vet.

7. Dogs perceive the world through their noses

Humans have about 50 million olfactory sensors in their nostrils, while dogs have six times as many. The part of their brain that is dedicated to the sense of smell is 40 times larger than ours.

Human bras, bikinis and boxer shorts host a smorgasbord of tastes and smells. They are worn near our glands which constantly emit hormones, pheromones, and other secretions. For a dog, sniffing them is like attending a banquet or reading a dictionary.

8. Because they smell of you, your underwear is of great value to your dog

By eating them, dogs identifying with their owners. By their way of thinking, this consumption elevates their status.

9. For similar reasons, your dog will want to smell like you

They will seemingly play with their find, toss it up in the air, and roll in it. You have a high position in the pack hierarchy and by smelling like you, they will rise through the ranks.

If you have more than one dog, they may devise a game of mutual amusement, with the undergarment as the trophy.

10. Because you made it a fun game

If, even once, you have participated in this game by trying to retrieve your underwear, by chasing excitedly after your dog, you have a problem. You have increased the value of the prize. Your dog will repeat this behaviour every time it has the opportunity and will taunt you with them.

11. Your pet may seek out your underwear because it misses you

And wants to be near something that reminds them of you. This does not prevent them from devouring the object of their affection.

What happens if your dog eats underwear

The consequences of their actions, depend on the size of the dog involved, and the size of the knickers swallowed. Evidence has shown that some dogs only have problems when they have consumed a drawer full.

Underwear is not generally made of food grade fabric so there could be four possible outcomes.

How to stop your dog from eating your underwear

Do not leave clothes lying on the floor or anywhere that your dog can get hold of it. Train all the people in your household, old enough to be compliant, to do the same.

Some dogs have a penchant for clean underwear. Make sure you guard it while it is drying and in the ‘to be folded’ basket.

If your dog is left alone for any length of time, and has separation anxiety, leave it with something that smells like you. This will comfort your dog and lessen your clothing bill.

Ensure that your dog has enough to eat. If it is not easily satisfied, have it checked for parasites or metabolic problems.

Give your dog’s toys and games to occupy them mentally so that they do not go looking for trouble, or what they would call entertainment.

Exercise your dog regularly so that it does not look for unsavoury outlets for its excess energy.

If your dog does seize your underwear, react calmly, and issue a stern ‘GIVE IT’ or ‘DROP IT!’ command. Under no circumstances make a game of it. Do not pursue the dog or dogs.

If the deed has already been done, you need to induce vomiting. Learn how to do so before your intervention is needed.

Image in header via https://unsplash.com/photos/gxyfJQg7Lno

link to Why Does My Dog Yawn When I Cuddle or Pet Him?

Mental stimulation wards off stress, boredom, and anxiety, which is essential for a dog’s overall happiness. That’s definitely something you’d want for your dog. And that’s exactly what...