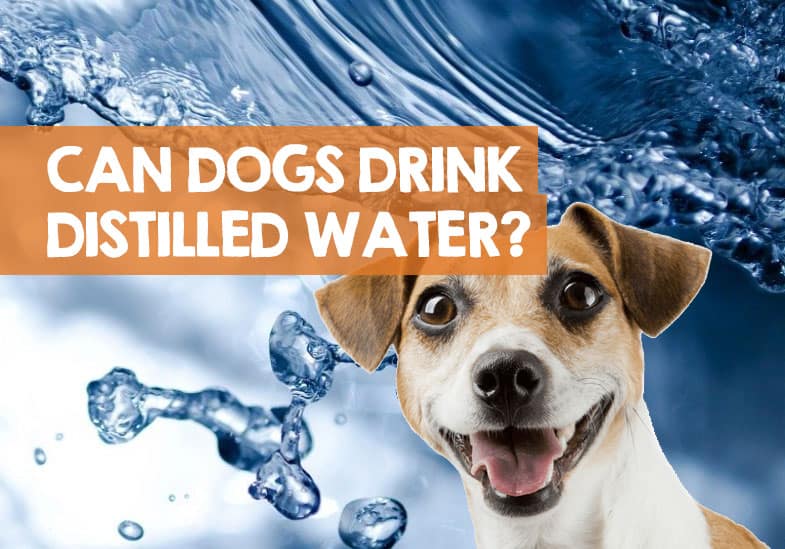 Over the last couple of decades there’s been a trend for humans to drink filtered water. As our awareness of health issues increase, these trends are often extended to our pets, with some owners switching to raw diets.

As part of this trend, some pet owners even advocate giving dogs bottled or distilled water to drink, rather than water from a tap or faucet. In fact, only last week, a friend of mine asked me whether dogs can drink distilled water.

I genuinely didn’t know, so decided to research if dogs could drink distilled water safely. I looked at both sides of the argument, from those who promote holistic canine diets, and then veterinary professionals – here’s what I found:

Can dogs drink distilled water? Dogs can drink small amounts of distilled water occasionally, but distilled water should not be your dog’s only source of drinking water, as vets say there is the risk of serious side effects including low mineral intake and low blood levels.

Will distilled water hurt my dog?

I will come onto what the advocates say in response to this question in a moment, but firstly, the quote I believe to be most reliable and trustworthy was from a professional vet referenced on the authoritative PetMD.com website.

The vet was Doctor Jennifer Hennessey, who is also the owner of Animal ER of NW Houston. She said this about distilled water possibly hurting dogs.

“Distilled water lacks minerals and can cause the body to lose important electrolytes through the kidneys, leading to low blood levels. This type of water can also soak into tissues more than water with minerals, thereby causing swelling or over-hydration and water toxicity, which can be harmful to cells and tissues.”

The PetMD.com website went onto to describe the possible symptoms related to water toxicity, including fatigue, irregular heartbeat, and neurologic changes.

Handy Hint: I’ve put some tips together to help you stop your dog’s outdoor drinking water freezing up in the winter or colder months.

Why can distilled water be bad for dogs?

To get into this in a little more detail, you need to think about how distilled water is produced.

The process of distillation requires boiling water until all impurities are removed. This is good in one way, as it means any potential contaminants in standard water will be removed.

However, for dogs, it could also have a negative effect. Distilling the water also removes minerals that are essential to a dog’s diet. Many dog foods don’t have the minerals and electrolytes in them that dog need, and instead, they get this from drinking water.

When that water gets distilled, those minerals and electrolytes are removed.

The excellent Dogster magazine goes one step further with even more detail, publishing the following quote in one of their 2017 editions.

“Studies in animals show that consuming distilled water results in a variety of adverse health effects, including a negative balance of sodium and chloride in the blood, lower volumes of red blood cells, increased secretion of cortisol and adverse changes to the kidneys, including atrophy of the glomeruli. Moreover, these changes were not affected even when nutritionally adequate diets were fed. In addition, distilled water is reported to be less thirst quenching, which may lead dogs to drink and urinate excessively.”

The above statement about the risks in dogs drinking distilled water was attributed to Diana Laverdure- Dunetz. She is a well-renowned canine nutritionist who has published multiple books.

Other sources I read said that dogs that only drink distilled water could become potassium deficient which then might lead to heart problems developing.

There’s also the consideration that for humans, drinking distilled water has never been conclusively proven to be healthier than standard drinking water.

“The drinking of distilled water as a replacement for drinking water has been both advocated and discouraged for health reasons. Distilled water lacks minerals and ions such as calcium that play key roles in biological functions such as in nervous system homeostasis and are normally found in potable water. The lack of naturally occurring minerals in distilled water has raised some concerns.”

Can we assume same with dogs?

Personally, I would. I think it’s safe to assume that dogs could drink distilled water, but not all of the time, and only in small moderation.

But before you run off and tip all of that distilled water out of your dog’s drinking bowl, I wanted to also give opinions from the other side of the coin.

Handy Hint: Newborn puppies should not drink anything else aside from their mother’s milk for the first 3 to 4 weeks of age. After that they can be weaned, and then be introduced to drinking water.

Those who advocate distilled water for dogs

There are multiple blogs and websites dedicated to alternative dog feeding, and every single one that I saw has the best intentions. However, I am yet to find a website where a vet recommends that dogs can drink distilled water.

But I completely understand where dog owners are coming from when they raise concerns about the chemical contaminants and impurities that are in faucet and tap water.

The logic that distilled water is better for dogs is certainly a sound one, aside from the lack of essential minerals.

Thankfully many of those bloggers do appreciate that the distillation process will also remove minerals that dogs need.

Because of this, many of the bloggers will recommend that if you are going to give your dog distilled water to drink all the time, add the missing minerals back into it.

You can do that by buying concentrated trace mineral drops on Amazon. Before putting this into your dog’s distilled water, please do your research into dosages, as it’s not something I’ve looked into.

Aside from being used as a direct replacement for normal drinking water, some dog owners also use distilled water for other reasons too, such as:

Distilled water for dogs with kidney disease or bladder stones

There is some conversation online about distilled water helping dogs with kidney disease and bladder stones. But I can’t find any medical or scientific documentation to support this, so talk with a vet for more information.

What I did find though was a scientific study into humans with kidney or bladder stones drinking water.

“It is not the quality of water, rather the quantity of water consumed that matters most in the occurrence of kidney stone disease.”

You might assume reading this, that distilled water for dogs with bladder stones and kidney problems won’t be that significant a help.

Some people believe that you reduce the tear staining on a dog’s face by only letting them drink distilled water. The rationale is that it’s the minerals in non-distilled water that causes the stains.

However, my view on this is that most dogs get those same minerals in their food, so not sure how scientific or true this would be.

Most vets will tell you that tap water is perfectly fine for your dog to drink. Tap water will have been treated, and I personally think that unless you’re sure your dog is getting all the minerals they need, you should not give them distilled water.

But, as with anything, small amounts of distilled water here and there is not going to harm your dog.

I regularly write about food and drink that dogs should, and should not eat, and here’s some of the more recent content.