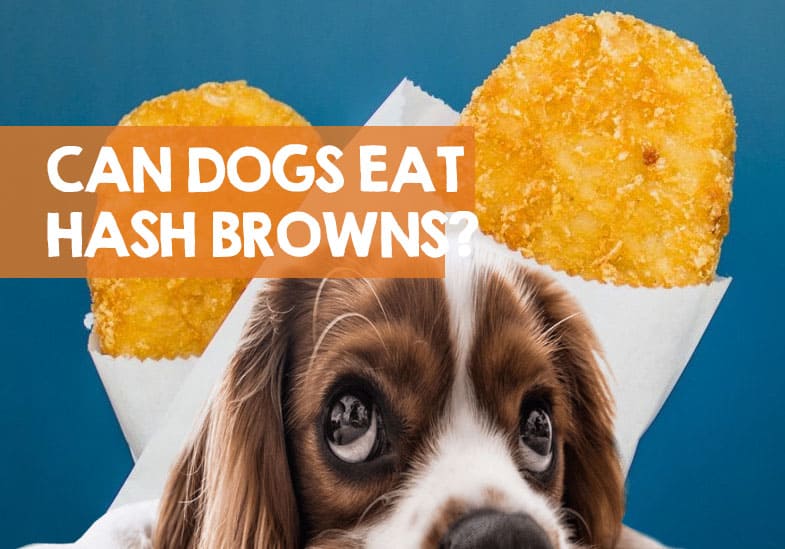 As pet owners we all know how tempting it can be to give our dog a tasty snack from our own plate, especially when they flash those puppy dog eyes at you. However, much of the food we eat should not be eaten regularly by dogs; and hash browns certainly fall into that category.

If you’ve ever been tempted to let your dog eat a hash brown, then chances are they probably didn’t have an adverse reaction, but the story could have been very different.

In this short guide, I am going to explain why hash brown potatoes aren’t great in a dog’s diet, especially McDonald’s hash browns. Firstly though; here’s the short answer.

Can dogs eat hash browns? Dogs should not eat hash brown potatoes. The McDonald’s ones in particular are high in bad fats, preservatives, and salts. Hash browns are also fried in oils, giving them a high calorie count, plus some are cooked with onion which is toxic to dogs.

Is hash brown bad for dogs?

There are a few different reasons why hash browns are bad for dogs. There’s the way they are cooked, the ingredients and seasoning, plus the calorific content. Let’s look at each part separately, starting off with the ingredients.

Why the ingredients are bad

A typical hash brown recipe will include shredded or riced potatoes that are then fried with onions, sometimes bound with eggs and oil, and have salt and seasoning added.

Whilst small amounts of cooked potato aren’t bad for dogs, raw potato in large quantities is. So, if you’re making home-made hash browns, don’t let potato fall on the floor.

Raw potato contains solanine which is toxic to some dogs – although they would need to eat huge quantities to become ill so it’s unlikely to be an issue.

In short, I doubt the potato in hash browns will cause a stomach upset to your dog when eaten in isolation.

However, onion is very toxic for dogs, and this is a core component of many hash brown recipes. Salt can also lead to sodium poisoning, and many hash browns will be heavy on the seasoning.

Why the cooking method is bad

Then there’s the method in which hash browns are cooked. They tend to be fried in vegetable oil which is a very unhealthy ingredient for canines. In fact, Banfield Vet Hospital have this to say:

“Vegetable oil, grease, butter, and bacon fat are not appropriate fats for your dog to be ingesting. These low-grade oils may do more damage to your pet’s health than good, potentially causing disorders like pancreatitis or obesity.”

The bottom line is the type of oil that hash browns are fried in are not good for dogs at all. The oil will contain a lot of the bad kind of fats; trans and saturated fat.

Why the calories and carbs are bad

Hash browns potatoes are high in carbohydrates. Carbs aren’t necessarily bad for dogs, as they provide them with the energy they need. However, too many carbs are a bad thing, and can lead to diabetes and obesity.

Dogs get enough carbs through high quality and commercially available pet food, so whilst my dog can eat hash browns, he doesn’t really need to!

And then there’s the calorie content to be aware of.

What I did was take two average sized and popular dog breeds to see how much they weighed and how many calories they need each day. Here’s what I found…

Based on those calculations, here’s are two popular dog types and how many calories they need each day:

Keep these numbers in mind, as now I want to talk about whether dogs can have McDonald’s hash browns, with a focus on the calories.

The ones I particularly think are bad for dog are the salt, sodium, and various oils. Think about the last time you picked up a McDonald’s hash brown and how oily it was… do you really want your dog to eat that?

And then there’s the calories, which is why McDonald’s hash browns are bad for your dog’s diet. Here’s a selection of the McMenu with how much it will take up in two different dog breed’s daily recommend calorie intake.

Dogs should not eat frozen hash browns. They are lower in calories when cooked from frozen versus being purchased in McDonalds, but they will still be high in salts, fats, and preservatives, all of which are bad for dogs.

Just like any form of fried food, dogs should not eat hash browns from Subway. Subway hash browns are high in saturated fat, salt, and also have far too many calories to be a doggy snack.

Most dogs will eat a little hash brown and show no side effects. However, if your dog has eaten hash brown potatoes and you notice a change in behavior then please call your vet immediately.

Signs of sodium, onion, or food poisoning, include:

I do not recommend you ever let your dog eat hash brown potatoes. Whilst the occasional little treat is fine, letting your dog eat lots of McDonald’s hash browns or frozen store ones is bound to have an adverse effect.

When you consider the calorie content too, just a few McDonald’s hash browns can take up a huge proportion of your dog’s daily recommended intake…. Certainly more than the 90/10 rule I like to stick to with my own dog.

I’ve researched lots of other foods too to see how suitable they are for dogs. You can read some of the more popular ones below:

Disclaimer: I am not a vet and the advice in this article is based on my own online research and common sense. Always consult with your vet before letting your dog eat hash browns or any other food made for human consumption. All dogs are different.