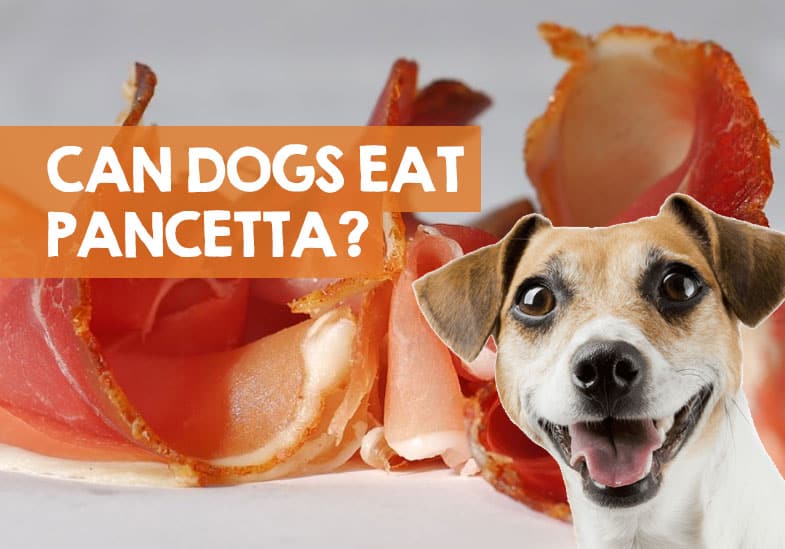 Pancetta is a pork belly meat that humans often eat raw. Given that pancetta is often eaten raw and is a meat product, you would think it would be safe for your dog to eat. I am sure that most dogs will have eaten some pancetta and showed no toxic reaction, but you do need to be safe about it and think of the bigger picture.

In this very short guide, I will explain to you what I have learned about a raw pancetta diet for dogs, whether it’s safe, and if you dog should be having pancetta at all.

Please be aware, this is all personal opinion and should not replace the advice of a professional. Always talk with your vet before letting your dog eat pancetta or anything else outside of a standard dog food.

Can dogs have pancetta?

I don’t believe you should let your dog eat raw pancetta or cooked pancetta, and this is for a number of reasons.

Firstly, pancetta is pig’s belly, and has a large amount of white fatty meat on it. Fatty meats are bad for dogs, and when eaten in large and regular quantities can lead to health issues.

In fact, the WebMD.com website says this about dogs eating fatty meats similar to pancetta:

“Fat trimmed from meat, both cooked and uncooked, can cause pancreatitis in dogs.”

I would hazard a guess too, that the stringy white fat you see on cuts of pancetta could come away from the meat and present a choking hazard to your dog.

Then there’s the way in which pancetta is prepared which can be problematic for dogs. This is what is said on pancetta’s Wikipedia entry:

“Most pancetta is salt cured and dried… made using pork belly brined in a mixture of salt, dextrose, spices and spice extracts, sodium erythorbate, garlic, sugar, and sodium nitrate. The brine is usually composed of salt, nitrite, ascorbate, spices such as black pepper, chilli, garlic, juniper, and rosemary.”

There are a lot of problems with this, including some elements of the pancetta preparation process which is toxic for dogs.

Let me break them down in detail, with the risk of each one explained.

Other reasons why pancetta is bad for dogs

1. Salt is toxic to dogs to large quantities

Salt is something that you never want your dog to eat if you can help it, and there’s a lot of salt in pancetta. To quote the WebMD.com website again, here’s why it’s a dangerous ingredient for dogs to have in pancetta:

“Eating too much salt can make your dog seriously thirsty. That means a lot of trips to the fire hydrant and it could lead to sodium ion poisoning. Symptoms of too much salt include vomiting, diarrhea, depression, tremors, high temperature, and seizures. It may even cause death.”

2. Spices can give your dog an upset stomach

Dogs do not deal with spicy flavors very well and will often develop very quick upset stomachs. The spices in pancetta could make your dog sick, with obvious signs including diarrhea, discomfort, and vomiting.

3. Garlic is a toxic ingredient to dogs

Garlic, leeks, and onions are all part of the allium family; a type of food that is extremely toxic to dogs. Now, in truth the quantity in a portion of pancetta won’t be enough to poison your dog, but it could lead to a stomach upset.

Pancetta is a highly processed and cured red meat. It has been consistently linked with increased mortality rates in humans. I believe the same can be applied to dogs, particularly those that are placed on a regular raw pancetta diet for dogs.

Here’s what the Wikipedia pancetta entry says about the subject:

“Associated cancer risk is likely related to the presence of nitrosamines in processed meat products like pancetta. Nitrosamines are carcinogenic compounds formed by the reaction of nitrites and amines. Nitrites are added during processing to act as preservatives and as antibacterial agents against clostridium botulinum, the toxin that causes botulism. Amines are naturally-occurring compounds found in meats. Nitrosamines are often formed in high temperatures, like those required to produce bacon, one processed meat in which nitrosamines have been consistently found.”

All the points raised above mean I don’t believe you should let your dog eat pancetta, other than possibly as a very small treat from time to time, and with the fat cut away from it.

If you are considering a raw pancetta diet for dogs, it might make you think again.

What about cooked pancetta for dogs?

Pancetta is typically cooked in oil, meaning it’s going to be greasy, and it’s going to be fatty. All you’re doing here is making pancetta even more unhealthy for your dog, versus raw pancetta.

Given what I found, my view is that dogs should not have pancetta at all. Yes, a little bit here and there might be fine, but you should monitor them for any bad reaction to it.

If you want to put your dog on a raw diet, there are other meats that are better than raw pancetta, so do your research into ones that are not red meats, cured, high in salt, and fatty in content.

I regularly write about the foods that dogs should not eat and why. You can read some that are closely related to this topic below: