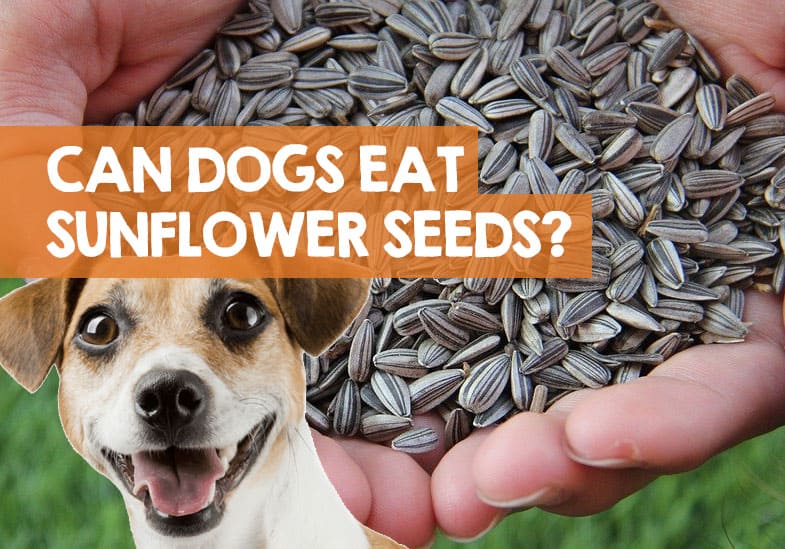 Our French Bulldog loves to gobble down any food that drops on the floor. Last week was a perfect case in point when my wife dropped some sunflower seeds from the table. Our dog ate the sunflower seeds with the shells on, which immediately made us panic thinking he would be ill.

Thankfully he was OK and suffered no bad reaction. But as I sound discovered, it could have been very different. I had spent some time researching into sunflower seeds being poisonous to dogs, plus the risks of them eating the shells, kernels, or butter and oil derivatives.

Here’s what I found out…

Can dogs have sunflower seeds? Whilst dogs can eat sunflower seeds in moderation, owners should exercise caution. The sunflower seeds should be unsalted and peeled, possibly even ground up and added as a dusty treat over their main meal. They are not poisonous and could even have certain health benefits.

Whilst dogs can eat sunflower seeds without the shell, whether they should be allowed to eat them is another discussion entirely… and that’s what I want to explore in more depth today.

Should you let your dog eat sunflower seeds?

Just like humans, dogs all react differently to foods. If you are going to let them eat some of these seeds, make sure it’s a very small portion at first, perhaps just a couple on top of their normal food.

The sunflower seeds should be unsalted, peeled, and not have any other seasoning on them. Dogs that consume high salt levels can suffer with sodium poisoning and dehydration, which is extremely serious… and the shells can also be dangerous (more on that later).

Disclaimer: I don’t know your dog, the history, or if it has any existing health conditions. Based on this, you need to ask your vet before you add anything to your pup’s diet that wasn’t intended for them. For example, sunflower seeds have a high copper content. This could present liver problems, so please do check with a vet first before letting your dog eat some.

Are sunflower seeds poisonous to dogs?

Whilst I cannot find any scientific references to sunflowers being toxic to dogs, I was able to find some information on the LiveStrong.com website about the harm that can come to humans if sunflower seeds are eaten in excessive quantities:

“Overindulging in sunflower seeds could potentially cause problems with excessive intake of phosphorus, which may lead to calcification of non-skeletal tissues and kidney damage. Excessive intake of selenium might cause symptoms of selenosis, including brittle hair and nails, skin rashes, fatigue and irritability, and even death.”

I am going out on a limb here, but I would assume that similar dangers would present themselves to dogs if they ate huge quantities of sunflower seeds each day.

If you do decide to let your dog eat sunflower seeds, please do remove the hard-outer shells first or purchase seedless varieties.

Whilst dogs can eat sunflower seed kernels in moderation, the shells should be avoided. Unlike other animals such as rodents and birds, dogs have no way of de-shelling seeds.

And this can become a problem, because the shells are rough in texture and not easy for your dog’s digestive system to break down. This could lead to serious gastrointestinal problems, and certainly diarrhea.

When we eat a sunflower seed, we can quickly chew the shell and then spit it out. Dogs don’t have that luxury meaning the shells can choke them, get stuck internally, and lead to stomach upsets.

What happens if a dog eats sunflower seeds?

The results will entirely on the volume they eat, the way the seeds are prepared, and whether shells are still on.

For example, if your dog eats a whole bag of sunflower seeds, I can’t imagine the outcome will be a pretty one. It could lead to vomiting, diarrhea, and possibly even choking.

Be very strict on how much your feed your dog, ensuring to not exceed a tablespoon of shelled sunflower seeds in any one portion.

In moderation, sunflower seeds could offer some health benefits to your dog. I don’t believe you should suddenly rush out and start adding seeds to your dog’s diet, but here’s what the potential positives are according to medical research I found online.

Bear in mind, the studies referenced above were conducted on humans and not dogs. There are no real comparable studies relating to canines and sunflower seed consumption other than this research which looked at how the seeds can benefit dogs’ skin and hair:

“It was concluded that a 1-month supplementation with either flax seed or sunflower seed in dogs provides temporary improvement in skin and hair coat. These changes appeared to be associated with increased serum 18 carbon PUFA.”

If I was going to let my dog eat sunflower seeds, I would personally grind them up without the shells, and make sure there was no salt present. Before I even did that, I would also wash away any impurities that could be covering the seeds.

I would then sprinkle a small amount on their food or add it as a ground up powder – kind of like a supplement.

There are some dog-friendly sunflower seed recipes online. One of the best I found was on AllRecipes.com for homemade sunflower dog treats. I’ve not tried these with my own dog, but the person who came up with this idea said:

“I’ve started making my own dog food, and these are the perfect little treats! Whole grain cookies with flax seeds and sunflower seeds will make your dog pay attention!”

Be strict on portions though as according to Healthline.com, there are 204 calories in a quarter of a cup of sunflower seeds. That’s not a lot of seeds, but it is a lot of calories, can equate to up to 32% of a small to medium sized dog’s recommended daily intake.

It would not take too many weeks of letting your dog eat sunflower seeds in reasonable quantities for them to start putting weight on – so just bear this in mind.

When it comes to snacks, I follow one very simple rule with my dog; the 90/10 rule. It’s simple to follow, and just means that anything that counts as a snack should only account for 10% of his daily calories.

It’s healthier that way for sure.

In fact, many dog owners will use sunflower seed butter as an alternative to peanut butter. Many commercially available peanut butters contain xylitol, which is very toxic for dogs, and also found in candy and mints.

Handy Hint: Some mints and gums contain so much xylitol that could be kill your dog. Read more about how the popular Tic Tacs could be a problem for canines.

Looking at it closer, if you consider that dogs should only really be eating 25 calories for every pound they weigh each day, then the numbers can soon stack up with sunflower seed butter.

I’ve crunched the numbers on it by taking two common dog breeds and what their average weights are. This has let me calculate what percentage of their daily intake a portion of branded sunflower seed butter could be, using some popular brands.

By then taking the three best selling sunflower seed butters on Walmart.com, and then looking at how many calories were listed in a serving, you see this:

As you can see, for a smaller breed, just one serving could take up around a third of what they should be having each day, based on the 90/10 rule.

To conclude, dogs can eat sunflower seed butter but please keep the portion to a small one.

Sunflower oil is made by squeezing sunflower seeds to a pulp, with the resulting plant-based oil being rich in fatty acids. On a positive note, sunflower seed oil is low in saturated fats and will often be added to commercial dog food in small quantities to provide omega-6 fatty acids into your dog’s diet.

Handy Hint: We will often put a little sunflower seed oil on our dog’s nose when it gets dry and cracked. You can also use it on dog paws when they dry out in the summer months.

Omega-6 fatty acids are said to contribute toward the health of your dog, with the benefits of soft and shiny fur plus a health immune system being commonly referenced online.

Based on this, dogs can eat sunflower seed oil, but it’s not something I would manually add to their food yourself in higher quantities.

The reason being, in large amounts, sunflower oil will put too much omega 6 into your dog’s system. This is said to lead to increased inflammation, possibly leading to a higher risk of cancer according to Dr Dressler writing on DogCancerBlog.com.

“Too much omega 6 and not enough omega 3, and bad things happen.  These bad things are not minor, folks. Excessive intake of omega 6 fatty acids suppresses cells that are key in the body’s natural cancer-fighting ability (Natural Killer cells and cytotoxic T cells).  The omega 6 group promotes inflammation, which is critical in cancer development.”

If your dog has a deficiency in omega-3s and 6s and need to boost their fur and skin health, rather than them eating or drinking sunflower seed oil, give them a single oil supplement.

There are plenty of them on the market, but they current best in my opinion would be this fish oil for dogs with omega 3 and 6 (view on Amazon).

As with any non-dog recommended food, the main consideration is common sense and moderation.

There are plenty of online guides that say sunflower seeds are okay for dogs to eat. Whilst I share this sentiment, I am not going to start supplementing my dog’s diet with sunflower seeds every day.

All dogs are different, so as with anything like this, you should always ask your vet first. Your dog might have pre-existing health conditions that make seeds a very bad choice for them or they simply might react badly with an allergy.

Play it safe, take the shell off, let them try one, and go from there.

Ultimately tough, there are plenty of healthy dog treats out there that have been manufactured for dog’s in consultation with vets.

Based on this, there really is no need to let your dog eat sunflower seeds unless you are going down the raw diet route.

I regularly blog about what foods dogs should and should not eat, and love to look into the calories, risks, and health benefits. Here is a short selection of some that I think you will like the most: