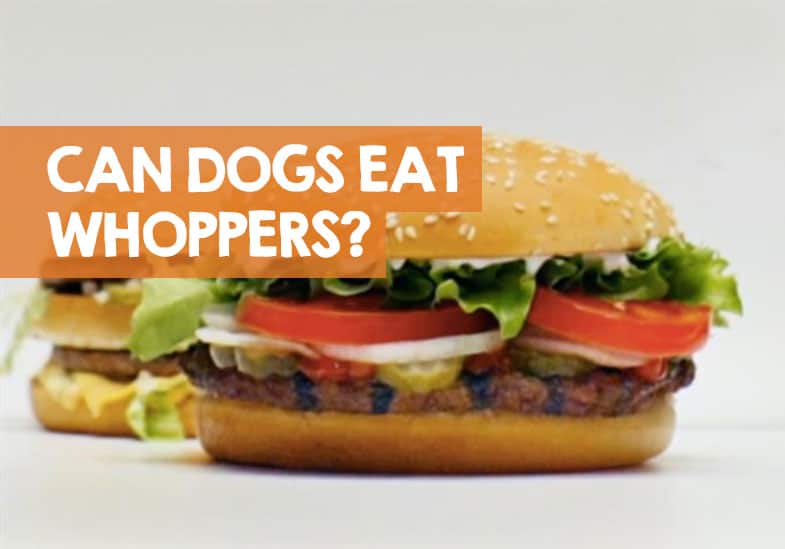 At least once a month, my son and I will take a trip to the BK drive-thru for our fix of burger goodness. As you can imagine, the smell of our Burger King Whopper soon gets our dog’s attention when sat in the back; it’s possible to almost see his mouth start to salivate.

We’ve often wondered whether it’s ok to let our dog eat a Whopper from Burger King. I’m of the opinion that you should always play safe with human food, despite the pleading eyes from your dog! Having said that, it’s mostly burger so it must be safe to feed a dog a Whopper burger? I wanted to find out, and here’s the lowdown.

Can a dog eat a Whopper burger?

It’s not recommended that dogs eat Whoppers. There is little nutrition in a Burger King Whopper, and some parts could give your dog a stomach upset. For example, there are slices of onion in Whoppers, which are known to be a toxic ingredient to dogs, which can poison them in large quantities.

Another aspect to consider is how many calories are in a single Whopper. There are enough in there to account for up to 100% of small to medium dog breed’s daily calories. Double Whoppers are even more so, coming in at a “whopping” 139% and that’s before you add the cheese and bacon!

You might be wondering how I came up with these calculations?

I asked our dog’s vet how many calories a dog should eat each day, and was told that for every pound in weight, a dog should eat 25 calories. The vet also said that treats should only really account for 10% of your dog’s daily diet intake.

Based on this, some of the numbers I crunched are quite shocking. It should hopefully make you reconsider about letting your dog eat a Whopper burger.

We own a male French Bulldog, and I would say he is a small to medium sized dog, so not an uncommon size. He weighs in at 25 pounds, which means he should really only be having 625 calories each day.

If our dog was to eat a single plain Whopper burger, containing 627 calories, that’s going to use up a massive 86% of his recommended daily calorie intake! It also completely throws the 10% snack ratio out of the window!

I then looked at all the different variations of Whopper burgers to see how much of my Frenchie’s daily calories these would account for. It makes for uncomfortable reading:

Scary stuff isn’t it…? Whoppers are definitely bad for a dog.

Putting aside the high calorie count, there’s also some potentially dog toxic ingredients in a Whopper burger which might make this junk food meal not a safe choice.

The standard Burger King Whopper is made up of 7 core ingredients:

If you choose to upgrade the Whopper, it can also include a processed cheese slice and bacon.

Which parts of a BK Whopper burger are not safe for dogs to eat?

When we take all of those ingredients into account and look closer at them, then there are certain elements that could be toxic to your dog. The main offenders are as follows…

Onions are not safe for dogs

Whoppers have large slices of onion in them. Onions are part of the allium family, which is known to be a toxic food to dogs, and also includes garlic, shallots, leeks, and chives.

According to research, if a dog eats just 0.5% of their own body weight in onion, they can get very sick. In rare cases and when onion is eaten in larger quantities, dogs can even die.

But, please don’t be overly worried.

If your dog does eat a Whopper burger with onions, they would need to eat a substantial amount to get ill. For example, there are probably around 7 grams of onion in a Whopper burger.

Given that we know onion toxicosis is most risky when dogs eat more than 0.5% of their body weight in onions in one go, a 45-pound dog would have to eat 16 Whoppers to develop onion poisoning.

Having said that, just a little bit of onion can cause doggy diarrhoea so it’s not worth the risk. You can read more about this on the American Kennel Club website.

All dogs are different though, so I recommend you consult with your own vet if you have any concerns after your dog eats a Burger King Whopper.

Handy Hint: I’ve compiled a helpful guide which shows what your dog might be able to eat from the Burger King menu.

Salt is not safe for dogs

There is also a lot of salt content in the various Whopper ingredients such as the bun, cheese, and mayo.

Dogs should not eat more than 1.5g of salt a day. Anything more than that can lead to dehydration and sodium ion poisoning.

From what I can research, there is around a gram of sodium in a standard Whopper which is a large proportion of your dog’s acceptable daily intake. If you’re also letting your dog eat things like fries and other junk, he could quickly exceed safe daily salt levels.

And then you have the Whopper bun which isn’t a good food choice either as they are manufactured with processed flours which can be bad for your dog’s digestion.

There are also the calories in bread too which are disproportionately high against the size of the portion.

The optional cheese slices in a Whopper will be processed. Many dogs will be lactose intolerant, and the thing is… you won’t know until the eat it and get sick.

Plus, if a dog eats large quantities of cheese on a regular basis, they can develop pancreatitis.

To conclude on this section, Whoppers are not safe for your dog to eat in large quantities and if consumed in the entirety with bun, sauces, cheese, mayo, onions, and salt.

Can my dog eat just the burger part of a Whopper safely?

If we take just the beef patty part of the Whopper in isolation, then you would think that would be okay for your dog to eat, surely?

To be honest, it’s not that far from the truth.

I believe there are around 230 calories in a Whopper beef patty, which for my Frenchie accounts for 37% of his daily recommendation. That’s way more acceptable than giving him the whole burger with bun and all the trimmings.

But please still exercise a little caution as a Whopper is still quite a fatty meat rather than a lean protein we’d like our dog to consume.

My dog ate a Whopper, should I worry?

Whilst I don’t recommend you let your dog eat Whopper burgers it does happen. They might straight out steal one off you, or it might be the only dog food option you have at the time.

The majority of the time your dog will be absolutely fine, with the most common problem if there is one, being diarrhoea and sickness – and even that would be rare for most doggies.

But please do consult with your vet if your dog eats something they shouldn’t have.

We’ve all been there and given in to our dog’s pleading face with a treat they shouldn’t really have from time to time. But when it comes to Whopper burgers, I would probably draw the line.

It’s junk food that contains a lot of fat, cheese, ketchup, mustard, onions and salt all of which will give your dog a bad belly and possible diarrhoea.

They also have very little in the way of nutrition; it’s not really worth it.

I’ve written similar blog posts about other fast food outlets, some of which you can explore below: