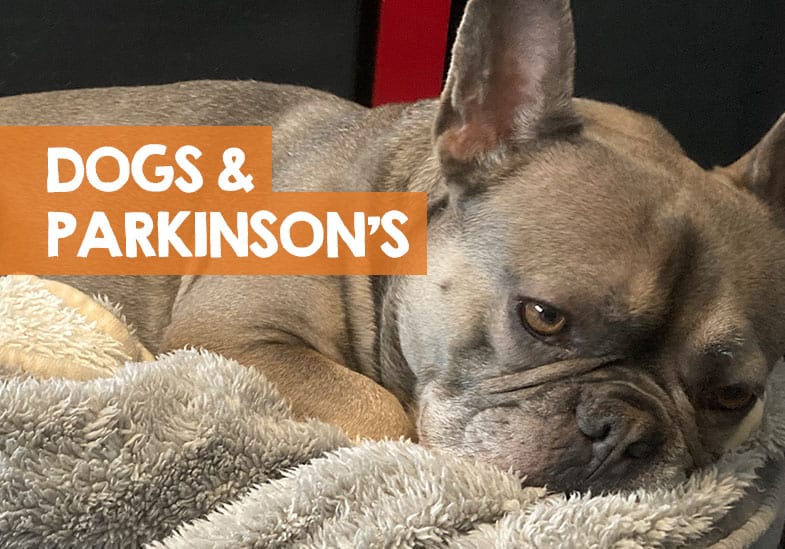 Parkinson’s is an unfortunate part of many people’s lives. On average, 60,000 Americans are diagnosed with Parkinson’s disease every year. As people get older, they become more susceptible to neurological disease. But did you know that dogs can also suffer with neurological disorders?

Canine Parkinson’s disease manifests in many similar symptoms to humans, such as tremors and a loss of balance. However, there are some key differences too.

In this guide, I’ll break down the differences between Parkinson’s disease in humans and dogs and the signs you should look out for. There are also some tips on how to care for your dog if they have unfortunately been diagnosed with Parkinson’s disease and neurological disorders.

Before we get into it, it’s important I stress that I am not a veterinarian. I am just a dog owner and lover. Please consult your professional veterinarian to verify any and all information in this article.

What is canine Parkinson’s disease in dogs?

Canine Parkinson’s disease is defined as a progressive neurological condition that dramatically affects motor function. In the simplest of terms, the nervous system is deteriorating which is causing issues with the patient’s movement.

Progressive means that it gets worse and worse as time goes on.

Whilst you might think it is more common for old dogs to get Parkinson’s disease, the truth is actually different as I will explain later.

How similar is canine Parkinson’s disease to the human condition?

Parkinson’s disease in dogs is very similar to how it affects humans.

Firstly, both unpredictably affect your movement. Both dogs and humans with this disease can expect to have sudden moments of stiffness. This could be any limb but also the face.

Equally, both can expect surprise tremors and shakes. This is often one of the first things owners notice in their dogs; a Parkinson like tremor in dogs or the dog shaking his head like Parkinson’s

The core of the disease is the same in both dogs and humans.

However, it is important to recognize the different ways Parkinson’s presents in dogs and humans.

A huge reason why Parkinson’s disease is difficult to spot in dogs in the early stages is because they don’t speak. Their faces also don’t express the same ways that ours do.

The first signs of Parkinson’s in humans are mostly not being able to move the face in the same way or slurred speech.

Unless you have a real-life Scooby-Doo in your life that is linguistically gifted, it’s most likely you won’t spot the signs of Parkinson’s in your dog until their limbs are affected with those Parkinson’s tremors I mentioned a moment ago.

Another critical difference is with the age groups that Parkinson’s most affects. As I said in the intro, it is usually the over 50’s that are affected by this pervasive disease in the human world.

In the dog world, Parkinson’s is actually more common in young dogs. It is even more distressing to see this as Parkinson’s has no real cure. This could eventually mean putting a young dog down with Parkinson’s disease, if symptoms rapidly worsen their quality of life.

How do I know if my dog has Parkinson’s disease?

Just how can you tell if your dog is suffering from Canine Parkinson’s disease and what are the signs to look out for? I’ve already touched upon tremors and head shaking, but there is more to it too.

Here is a useful list of important signals and symptoms to be aware of:

Other diseases that have similar symptoms to Parkinson’s disease

Now, I just want to address something you may have noticed here. Many of these symptoms and signs could also apply to other diseases. Is it an overreaction to assume that if your dog twitches a bit it is definitely Parkinson’s disease?

Well… yes and no. Certainly, all of these symptoms could indicate other ailments.

Let’s go through a few now:

As you can see, the signs of Parkinson’s in dogs could belong to an entirely different diagnosis. So, if you notice stiffness or tremoring, it is best to have your professional veterinarian make a formal diagnosis.

You’ll need to be diligent about recording your dog’s symptoms. Your vet will definitely be relying on your reports to see if their diagnosis is accurate. They will also test your dog’s motor function by having them do certain physical exercises.

They may also have full blood work and x-ray scans done to rule out any other potential ailments.

Your vet may encourage that you get a second opinion too. Neurological diseases in dogs are somewhat difficult to diagnose.

Living with a dog with Parkinson’s disease

Living with a dog with any kind of degenerative disease can be challenging. Your dog is likely very confused about what is going on with their body. A dog with Parkinson’s disease will feel out of control and betrayed by their body almost.

It’s important to be gentle with your dog during this time.

Though Parkinson’s disease is incurable and progressive, there are some things your vet may recommend that will help with your dog’s quality of life for as long as possible.

Your vet may recommend that you have professional physical therapy for your dog. This helps loosen joints and encourages mobility. There are certain physical exercises you can do with your dog at home too.

Your vet may recommend that you add certain foods to your dog’s diet to improve their nervous system’s overall function. This may also include certain supplements. Ask your veterinarian for recommendations on the very best diet for neurological disease sufferers.

If your dog’s condition makes independent movement pretty impossible, you may choose to get them a wheelchair. This will help them get around a little easier, without relying on their joints and muscles to behave.

Should you put your dog down if their Parkinson’s is bad?

I cannot answer that question for you. Your decision to euthanize a dog with Parkinson’s disease is highly personal. If your dog’s quality of life is truly poor, with no independence at all, the kinder thing may be to put them down.

It’s a decision we never want to make, but sometimes it really is the best thing for them.

Consult your veterinarian for advice on how long your dog can expect to remain mobile and when euthanasia may be the sole solution.

Any illness and disease in your dog is made so much worse by them not being able to tell us where and what the pain is.

As I mentioned, I am not a vet, so please do seek professional help if you suspect your dog does have Parkinson’s disease.

These guides might help you care for your dog when not well.