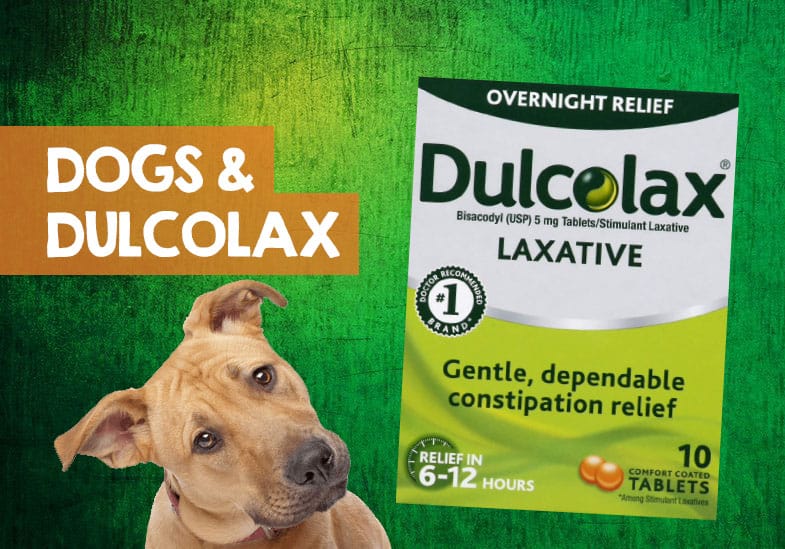 A constipated dog will be in pain and discomfort. Tell-tale signs will be lack of stools for two days, straining when crouching down, and painful yelps. It’s a hard thing to watch, so as an owner it’s tempting to reach for the first available treatment you can find. One of those treatments is said to be the Dulcolax stool softener, with many people saying they give it to their dog despite it being a human medication.

I decided to do some research into this, collating notes from pet and veterinary forums on the web to give you the most helpful guide to how much Dulcolax your dog should have, plus whether it’s even a good idea in the first place.

After all, it doesn’t sound that wise to give a dog a laxative medicine that’s intended for humans… but from what I have found online, it can be used for dogs and cats too and in fact, some vets will even recommend it.

Read on to find out whether you can give your dog Dulcolax, and just how safe is this to use on dogs according to what people have said online.

Can I give my dog Dulcolax?

There are multiple sources online which cite vets saying Dulcolax can be given to dogs to help with constipation. However, there are also other dog owners who say their dog has been ill as a result of having Dulcolax, so expert opinion should be sought before use.

The bottom line is that before you give your dog Dulcolax, please talk with your own vet first to get their professional opinion. All dogs are different and could react in different ways to medicinal products so don’t be hasty and get expert advice first. For example, your vet might warn you that the core component of Dulcolax (bisacodyl) should not be used with medication your dog is already taking, or it might have an adverse affect on an existing health condition.

So, ask your vet first. If they then say it’s ok to give your dog Dulcolax or bisacodyl, then you can buy Dulcolax on Amazon.

As I said though, there are countless examples online where dog owners and vets have said Dulcolax is fine to use on dogs, and the positive comments do outweigh the negative reports.

The general consensus is that aside from being an over the counter drug that relieves human constipation, Dulcolax can also be used on dogs to achieve the same purpose. It should not be viewed as long term fix and professional advice should be sought from a vert before you give it to your own dog.

How much Dulcolax for a dog?

Dosage should be very conservative and vary according to how much your dog weighs. There could be dire side effects if instructions are not followed carefully.

According to PetPlace.com,  typical dosage guidelines are as follows:

“For dogs, the dose varies between 1 to 4 tablets once daily, 1 to 2 ml of the enema solution given as an enema or 1 to 3 pediatric suppositories placed in the rectum.”

The issue here is that there is no information online about how the dosage of 5 to 20mg applies to the size of your dog, and how much Dulcolax you give your dog depending on their age.

Before you give Dulcolax to your dog, please check the dosage with your vet. It is a laxative intended for humans, and so the dosage amounts you see on the packaging will differ for canines.

Comments from vets online also say you should ensure your dog is properly hydrated whilst taking any form of laxative. This will help to soften the stools and ease the passage with less straining.

How to give your dog Dulcolax

From what I have read online, the best way to administer the Dulcolax to a dog is through their food. For example, you could crush the tablets up into powder. Vets and dog owners say you should put it into their food, mixing it in so the dog cannot see it. Alternative methods are a laxative, but I don’t know how easy it would be for a dog owners to push a laxative into a dog’s rectum – not something I would try personally. You can also try the gummy chews I showed above – dogs might eat those easier.

What happens when you give a dog Dulcolax?

Dulcolax loosens the dog’s stool by stimulating the nerves in the colon, thereby causing muscle contractions that propel the stool through the colon. It has an osmotic effect whereby it increases the water content in the stool thereby making it easier to pass through the digestive system and out the other end.

Vets say that Dulcolax will ease a dog’s constipation within 24 to 48 hours of administration. If it does not work, then it could be a sign of a more serious problem and therefore the dog owner should consult a vet immediately.

Should you give your dog Dulcolax?

Unless you have been advised to by your vet, do not give your dog Dulcolax or any other medicinal that was manufactured for human consumption. Whilst there are multiple references online to people giving this laxative to their dog, there are also some comments which raise concerns to me.

For example, here are two comments found on a web forum:

“Give your dog or cat anything but Dulcolax! It is very dehydrating and backs them up more. It actually caused my little Bessie to go into seizures.”

“I would avoid the use of Dulcolax. My vet recommended that I give it to my dog when he was unable to poop for a couple of days. After just one dose he had a severe acute pancreatitis attack.”

Whilst these are more the exception than the rule, it’s enough of a red flag to make me say only give Dulcolax to your dog with the go-ahead from a vet.

Possible side effects of giving a dog Dulcolax

My research has uncovered some possible side effects including:

As well as other medicines your vet might prescribe, I have heard of more natural methods, one being pumpkin and wheat bran. Here’s a list of some alternatives including some from vets.

As effective and efficient as Dulcolax can be for easing constipation in dogs, not all dog owners report positive results. After all, is intended for humans, but is used by some pet owners to help their dog’s constipation – often on advice from a vet.

I am not recommending that you give it to your dog without first having spoken with a vet.

The information on this page has been collated from other online resources, and should not be viewed as medical or veterinary advice.