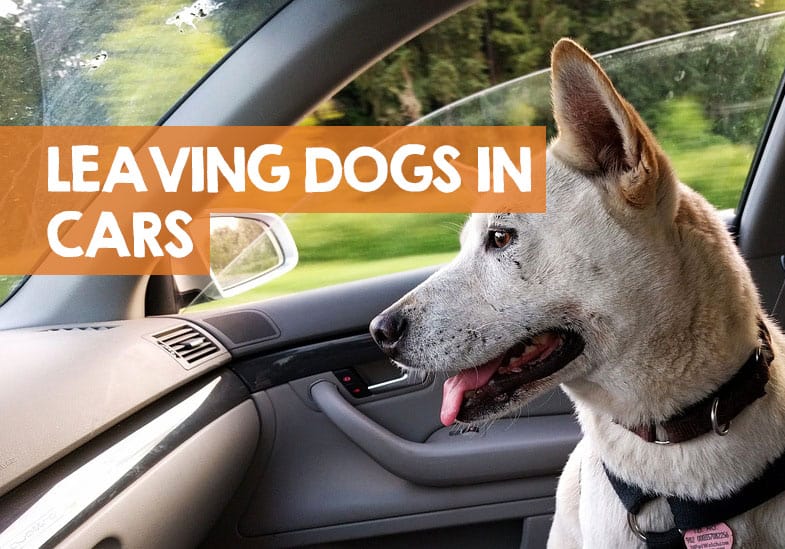 A lot of dog owners love the idea of taking their pup on adventures with them. However, whilst some stores and restaurants are dog-friendly, others do not allow dogs for health and safety reasons. This can leave you with a dilemma; how long can a dog be in a car with the windows down?

Surely a quick trip to the supermarket or meal at a restaurant won’t do any harm, right?

You might be surprised at the truth about leaving your dog in the car, even if the windows are down. In this short guide I will explain what the reality is, and what you need to know about the dangers even if you think the temperature is safe.

The reality is that even if you plan to leave your dog in the car for a short time, this is still enough time to cause significant harm in hot or even just warm weather. This can still be the case even if you make adjustments like turning on the air conditioner or winding the window down lower.

All dog owners should be aware of the dangers keeping your dog locked inside a car. Depending on the time of year, the temperature can rise dangerously high, or drop dangerously low in a matter of minutes.

Even if you have good intentions or think you have found a way to stop the car from warming up or cooling down, your dog will still be at a significant risk of dying from heat exhaustion or hypothermia in cold conditions if left inside a car. They will start to panic, scratch at the car door, and eventually become very ill.

From a legal perspective, whilst the law in US states and the UK are mixed on this specific issue, it can be classed as animal abuse and neglect, which is against the law in both countries. I will explain more about this further down the page.

If you are still unsure about whether you should leave your dog in a car unattended, this article will detail the ethical and legal implications of doing so, as well as highlighting some of the potential dangers that arise from leaving your dog in a hot car even if the windows are down and open.

Handy Hint: Did you know that it’s illegal to drive in the UK with a un-restrained dog. The law also applies in certain North American states. Read more about dog seat belt law here.

Can I leave my dog in the car with the windows down?

If you want to avoid any potential harm coming to your dog, you absolutely should not leave them in the car. You might think that leaving the windows down when you leave your dog in the vehicle will prevent them from coming to any harm, but this actually could not be further from the truth.

Firstly, it doesn’t have to be a scorching hot day for your dog to be at risk if they are left in the car. Studies have shown that in 70 degrees Fahrenheit weather, a car can reach 100 degrees in just 20 minutes and rise to 115 degrees within half an hour.

Even more concerningly, on a very hot day, a car’s temperature can climb to 140 degrees within the hour.

If someone asks you how long a dog can be in a car with the windows down, if it’s hot, the answer is literally just minutes before problems could develop.

That means that any debate over what the safe temperature is to leave a dog in a car can depend on multiple factors.

This is because cars are temperature conductors. This means that even if the windows are down and cooler air blows into the car, your car will still warm up rapidly because as conductors, they conduct and greatly intensify the outdoor weather.

cold day – the outdoor temperature means that your car will become dangerously cold in a matter of hours. Keeping your window open can also be a problem for dogs in case they get their head stuck or decide to jump out the car and escape.

How long can a dog be in a car with the windows down?

Whilst you should absolutely avoid leaving your dog in the car if possible, some people will say that it is generally safe to leave a dog for around five minutes.

I am not really convinced by this, and would not take this risk at all – and I suggest you don’t either, even with the car windows down.

However, even if it’s just for five minutes, you should always make sure that you don’t leave them completely alone – you should leave them with another passenger who can keep an eye on them. You should also keep the air conditioner or heat running in your car depending on the weather.

For example, when we take our dog out on a hot day and I need to run into a store, my wife will stay with our dog Claude, and often will step out of the car with him on a leash during the summer months.

Even if a passenger is with your dog, it is nonetheless important to make sure you don’t get side-tracked and keep your errand to five minutes to ensure the comfort of not just your dog, but your fellow passenger. Remember – cars heat up very quickly.

What is the safe temperature to leave a dog in a car?

Although you should actively avoid leaving your dog in a car, science shows that the safe temperature to leave a dog in car is when the outside temperature is above freezing and below 70 degrees Fahrenheit.

However, if you leave a dog in a car even within this temperature range, they will still rapidly overheat or freeze because the car’s conductive effect will cause it to greatly intensify outdoor weather conditions within the car.

What the law says

Although the health implications of leaving your dog in a car even with a window down should be enough to deter you, here is some more information about the US and UK’s legal stance on the issue.

In the UK, it is not necessarily illegal to leave your dog in the car. However, the Animal Welfare Act 2006 states that it is illegal to abuse, mistreat or neglect an animal that is under your care.

So, if your dog suffers or dies as a result of you leaving them inside a car, owners will be prosecuted under this act. They have been before, and no doubt will continue to be in the future.

When it comes to the US, it is more complex. Whilst West Virginia and New Jersey are the only states that explicitly define leaving your dog in the car unattended as a criminal act, most states will prosecute owners under animal cruelty laws, especially if the dog comes to harm or dies as a result of leaving them in a car alone.

Ultimately, when it comes to leaving your dog in the car alone on a hot day, the stakes are too high for it to be even considered as an option, even with the windows down. A dog’s welfare should always come first, so if you are running a lot of errands, it is much better to keep them at home than keep them in your car.

Disclaimer: The information on safe temperatures in this article were taken second hand from social media comments. You should always do your own research into what is safe before making any assumptions.

With the weather starting to hot up at the moment, here are some other guides which relate to dog welfare on warmer days.