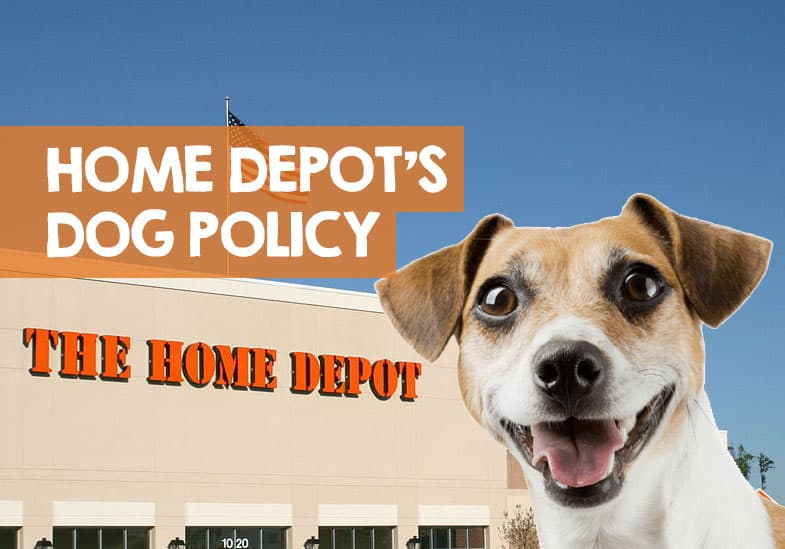 As dog owners we are conditioned into thinking that we can’t take our dogs into stores. Most of the time this is the correct assumption to make, particularly with stores that sell food. But some stores are increasingly dog friendly, and Home Depot is said to be one such company, but what is the truth?

I decided to find out once and for all, and actually interviewed some or their employees to get clarity on whether Home Depot allows dogs. Here’s what I found out.

Are dogs allowed in Home Depot? Home Depot’s dog policy officially states that only service dogs can come inside the store. However, many stores around the US have a lax approach and are dog friendly to all, with very few employees checking the credentials of the dogs that enter the store.

What does that mean exactly, as it’s a bit confusing right? Well, from what I can gather, dogs are allowed at Home Depot, but only if they are service dogs. The definition of a service dog is as follows:

“Service dogs are working dogs that have been trained to perform tasks that assist disabled people. Service animals may also be referred to as assistance dogs, assist dogs, or helper dogs depending on the country and the dog’s function.”

They are not the same as emotional support dogs.

It’s quite clear that only certain types of dogs are permitted in the store. But you might have found that this dog policy is not enforced in your local Home Depot, and there’s a good reason why.

Home Depot is clearly a very dog friendly store, and it appears that only a few stores in the United States actually bother to enforce the policy about service dogs. In fact, I found one store in Dallas that has this notice on their website:

“Leashed dogs are welcome inside Home Depot, but they must be under control and cleaned up after.”

It appears that the Home Depot dog policy is something that is very lax and depends on what the store manager’s opinion is. This assumption is backed up by what some Home Depot employees told me on Twitter. Here’s a selection of the best comments:

“Our store never enforces the service dog rule. Management have told us that as long as the dog doesn’t mess on the floor, act aggressive or scare customers then it’s fine for them to come in.”

“My manager told me that it’s too much of a grind to ask every dog owner who comes inside the store for documentation proving their animal is a service dog. To be honest, none of us want to ask anyway, it’s too awkward. As long as you clean up after your dog, none of us actually care a jot.”

“Colleagues of mine actually carry little bags of doggie treats in their aprons. It’s not always that great though, last Halloween a dog messed in the drywall aisle and it wasn’t reported and cleaned up. For 30 minutes customers were running carts all through it!”

“My boss told me to never, ever ask for a service dog’s documentation otherwise we could get terminated. So, in effect I am working in a dog friendly Home Depot, even though officially it isn’t’.”

However, things are a little different in Canada, and far stricter. Dogs are not allowed in Home Depot Canada, with zero exceptions aside from service dogs..

“The Home Depot Canada follows a strict no animals in-store policy. The safety of our customers and associates is our number one priority. Certified service animals are an exception to this policy and are welcome in our stores.”

There’s a good reason for this too.

In early 2011 a Home Depot worked in Ottawa, Canada, had her nose partially bitten off by a dog as she greeted the animal and owner at the door of the store. It was Shih Tzu dog being carried in a shopping cart that lunged at her.

This incident led to Home Depot Canada reviewing their dog policy, which up to that point had permitted dogs inside providing they were leashed and under control.

By April of 2011, Home Depot Canada made an announcement that they would ban pets from their stores from May 16 (read the news report). A representative for the company said they had done so as the best decision for the shopping enjoyment and safety of all customers plus in the interest of employees.

What’s surprising is that the stores in the United States haven’t followed suit in being more explicit about dogs being allowed inside. I say that because this dog bite was far from being an isolated incident.

In addition to the employee being attacked by a dog in Canada, there have also been reports of kids being bitten in stores.

After these incidents, and there are more, I read some social media comments from people who believed that for Home Depot to allow dogs, it was probably due a re-think. Here are what people said in response to one dog attack in a Home Depot store, many of whom are dog lovers themselves.

“There’s a big issue with only letting service dogs into a store. Basically, anyone can spend 20 dollars on a fluorescent dog vest and say their pooch is a service animal, no questions asked. There needs to be more stringent checking on the door, and almost a passport or permit approach to things.”

“You don’t just need to consider that dogs coming into Home Depot can be potentially dangerous. There’s also the question over allergies. Dog owners should be considerate of others. Please leave your puppy or dog at home when you go shopping unless it’s a legit service dog.”

“It’s starting to get stupid now. Loads of folks seem to think thay can being their dog into Home Depot. To be clear if you don’t get it, service dogs that are well trained are ok, it’s all the idiots not following the rules. Why is it necessary to bring your dog with you when you go buy some screws and glue?”

“Don’t get me wrong, I love my dog to bits, but I appreciate not everybody feels the same way. Whether Home Depot is a dog friendly establishment or not my dog has to stay at home. Not all people like dogs!”

Here’s a video of the news report that prompted the comments above.

As you would expect, many pet owners are more than happy that Home Depot lets dogs inside. In fact, some of them go so far as to actually leave glowing reviews about the fact. Here are a just a few I’ve found from the last few years.

“I love your company’s dog policy. On hot summer days, it means I don’t need to drive home first to drop her off, I can just bring her in with me, saving me an extra trip!”

“The employees at this store have always been friendly and helpful. Most of them recognize me and they may not know my name, but they do know my dog’s name. They treat him very well, giving him treats when they have some.”

And some not happy with Home Depot’s dog policy

Of course, not everyone is going to be pleased that Home Depot is dog friendly. Here are some comments from people who don’t think dogs should be allowed inside the store.

“I like the store for its convenient location to my home. I dislike the store for its dog policy. There seem to be dogs in the store at every visit. Recently I came across a woman coming around a corner with a big dog on a leash, when I turned the corner there was a large pile of fresh dog doo in the middle of the floor, not a pleasant experience. Why not establish a no dog policy?”

“My little girl is scared of dogs so has to stay in the car with my wife whenever I come to your store. I think that the fact that dogs are allowed in Home Depot stores in scandalous and shows how little respect you have for customers who find it problematic.”

As a dog owner and lover, even I question the why people take dogs into Home Depot. I am not comfortable with it, and personally think it’s a lawsuit waiting to happen for the company due to the risks involved.

However, it seems that for the foreseeable future, you can bring your dog into Home Depot providing it’s a service dog, or you tell the employees it’s a service dog. In fact, in many cases you might not even have to pass that test, if the comments from employees on Twitter are to be believed.

I regularly blog about big name establishments and their dog policies.