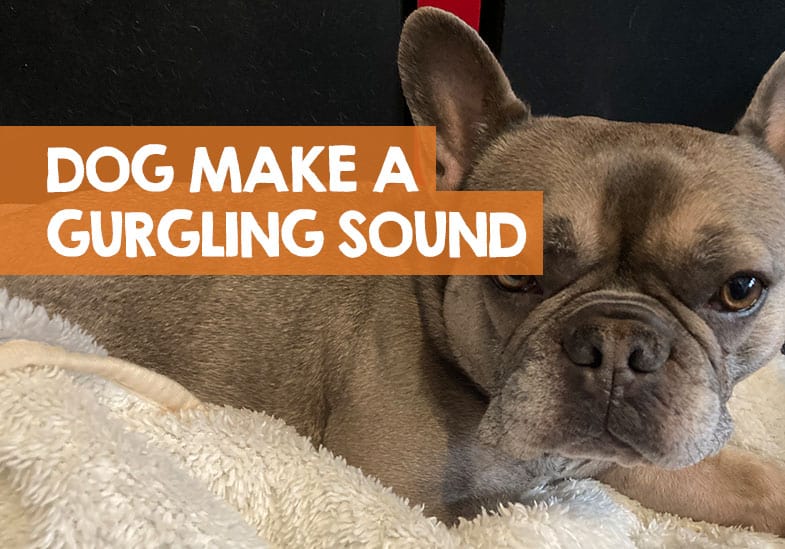 Does your dog make bubbling sounds when breathing or sleeping from their throat? It can be quite disturbing. I mean, it’s normal to hear your dog sneezing, whimpering, snoring and even occasionally, retching because he’s taken in some fur. But, gurgling while sleeping or breathing can sound very frightening.

Dog owners can be finely attuned to all the noises their fur-babies make. Most times, these strange noises are not a concern. But, what about that gurgling sound when your dog is breathing, particularly when sleeping?

It can sound like they’ve got a lot of phlegm stuck in their throat. Other people have told me the gurgling sounds like they’re dog is blowing bubbles deep down their throat cavity!

Fluid buildup can be serious, and your dog should be taken to the vet immediately for a full examination. Let’s explore the topic of gurgling noises some more and find out the reasons why your dog is gurgling while breathing.

Why does my dog make a gurgling sound while breathing?

When your dog sleeps, he makes a lot of sounds and funny noises. This tends to happen most during their REM sleep which is when all the dreams take place. Just like humans, dogs’ eyes start to flicker, and they make some strange sounds such as gurgling, whimpering or snorting.

They will sometimes even start to “run” in their sleep when their legs kick around.

Sometimes, though, you may notice your dog’s breathing is gurgling or bubbling when he’s up and about. This is not normal, and you should always get your vet to check him out.

Gurgling while breathing fast can be an indication your dog is not well. It’s often caused by a buildup of fluids in the chest and lungs or other blockages to the airflow. I also wrote a blog post about puppies that breath hard in their sleep which is worth reading if you have a younger dog.

What is stertor in dogs?

Your vet may tell you your dog has stertor (see the science). This is indicated by the noisy, loud and often, gurgling or bubbling sounds coming from your dog’s throat while breathing. Loud, vibrating sounds are often caused by the restriction of airflow passing through narrow air passageways because of blockages.

The gurgling sounds could be coming from the back of the dog’s throat, the throat itself, the voice box or the windpipe. Blockages such as trapped fluid or even loose flaps of tissue results in gurgling, bubbling or rumbling sounds whenever your dog inhales.

Stertor is more common in flat-faced and flat-nosed dog breeds. Once your vet has confirmed stertor in your dog, he’ll be able to advise on how to manage the condition.

Other reasons why a dog is gurgling while breathing

The most common dog breeds afflicted by acquired paralysis of the voice box include:

Acquired paralysis of the voice box is most commonly found in your larger breed dogs as mentioned above.

Paralysis of the voice box, also known as laryngeal paralysis, should be confirmed by your vet. Inherited paralysis is often detected in short-nosed, flat-faced dogs before they’re a year old. Acquired paralysis is most often diagnosed in older dogs.

What are the symptoms of laryngeal paralysis or stertor in dogs?

While gurgling and bubbling is often associated with laryngeal paralysis and stertor, you should also look out for the following symptoms:

Another sign of stertor and laryngeal paralysis is your dog has been making loud breathing noises for many years. Often, dog owners assume it’s normal for flat-faced and flat-nosed dogs to breathe loudly or make gurgling sounds. Other times, we confuse loud breathing sounds for snoring when our dogs sleep.

Other reasons your dog make gurgling sounds when sleeping

Gurgling and other strange noises coming from your dog while he’s breathing can have a range of causes. While we know it happens because of blockages to the air passageways, there are a number of causes for these blockages.

I’ve spoken about fluid buildup as being one of the reasons causing blockage in the passageway. But your dog could also be having one of the following problems:

With so many reasons causing your dog to be gurgling while breathing, you can see now why it’s essential to get your dog checked out by your vet.

Depending on the cause of your dog’s loud breathing, your vet may prescribe medications or even surgery. You’ll need to keep your dog calm especially if he starts to struggle with breathing. If he begins to panic or get overheated, his need for more air increases. This, in turn, will make him battle even more as the airflow is restricted.

If your dog has severe blockage of his air passageways, he may need to have intubation. This is when a pipe is inserted through the mouth into the windpipe. Oxygen is then delivered to the lungs, aiding your dog in breathing.

If intubation can’t be done because of an obstruction, then your vet may perform an emergency tracheotomy. This is when an incision is made into the windpipe so oxygen can be administered. Both intubation and tracheotomy procedures are only done in severe cases when your dog is battling to breathe on his own.

Your vet will advise you to keep your dog’s levels of excitement down as well as prevent strenuous exercises and games. Whether your dog is recovering from surgery or taking medications, you’ll need to monitor him closely.

Living with a dog who has stertor or laryngeal paralysis requires proper management of your dog’s lifestyle. Your vet will advise on how to cope with a dog who suffers from loud breathing.

Please be aware, I am not a vet and the advice on your dog making gurgling noises from his throat is based on personal experiences and my own online research. If you are at all worried about the gurgling sounds you should always consult with a professional.