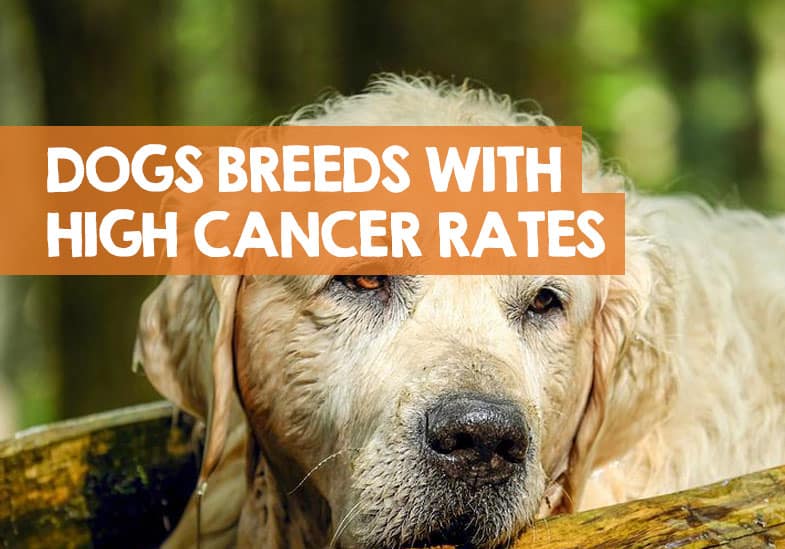 The possibility of your dog getting cancer is not something you want to dwell on, but the unfortunate reality is that they can suffer from it. What’s even sadder is that some dog breeds are more prone to cancer than others.

If you’re thinking about getting a dog, or already have one and worried about possible high cancer rates, then please look at the data I have compiled below. Be aware, that the list here is based on what I have found online in news reports and studies, letting me compile what I think the dog cancer rates by breed are.

Of course, this doesn’t mean your dog is going to get cancer if they are one of these breeds. And on the same note, just because your dog isn’t a breed with the highest cancer rates, it doesn’t exclude the possibility.

Below I’ve listed the type of cancers that these dog breeds can develop. Before that, here’s more detail on those breeds at risk of cancer and why.

Here are 13 dog breeds that are more prone to suffering from cancer:

Famous for their sweet personality and reputation as one of the world’s favorite family dogs, Golden Retrievers face a greater risk of getting cancer.

The Journal of Veterinary Internal Medicine published findings from a study that involved analyzing the causes of death in nearly 72,000 dogs (of different breeds) in North America.

“Golden Retrievers are recognized as having a higher prevalence of neoplasia, whereas a retrospective study in Sweden found that Boxers and Bernese Mountain Dogs were substantially overrepresented for death because of neoplasia compared with other breeds, including Golden Retrievers.”

The researchers looked at the prevalence of cancer deaths in over 80 dog breeds. Out of these breeds, Golden Retrievers and boxers topped the list as the breeds with the highest risk of cancer deaths.

Goldens are likely to suffer from four types of cancer:

We love them because they make terrific watchdogs and admire their athletic ability, but this easy-going dog breed often has a high risk of getting Lymphoma, Hemangiosarcoma of the skin, Gliomas ( a type of brain cancer ), and Mast cell tumors.

Great Danes have long been a favorite dog breed for those who love large dogs with an affectionate spirit, but this long-legged breed is more prone to Bone cancer and Lymphoma.

Bone cancer is, however, cited as the common contributor to cancer mortalities in Great Danes.

Labs hold the number one spot as the most popular canine breed in the US. They have the biggest heart ever, making them so loveable.

Dobies are the perfect balance of loyalty, affection, fearlessness, and intelligence. They make fantastic canine companions, no doubt.

When it comes to cancer, the Doberman Pinscher is a dog breed at high risk of Prostate cancer and Bone cancer (since it’s a large-sized breed). Mammary cancer is also quite common among female Dobies.

Known to value their human family and can literally do anything to please those they love, Rotties are one of the most preferred canine companions for many homes.

Unfortunately, Rottweilers are at greater risk of getting Lymphoma, Bone cancer, and Hemangiosarcoma.

Owners of this beautiful dog breed often describe it as a fluffy bundle of love, fun, and calmness.

Berners, however, are likely to get afflicted by Lymphoma and a rare type of cancer called Histiocytosis caused by the abnormal build-up of a certain type of white blood cells in areas like the lungs, spleen, bones, and liver.

Research shows that 25% of all cancer cases in Berners involve Histiocytosis.

“Histiocytosis is a cancer in which histiocytes proliferate rapidly and invade a wide variety of tissues . Histiocytes are a type of white blood cell called macrophages which ordinarily form part of the dog’s immune system. Their proper role is to engulf bacteria and other material which should not be present in the body and dispose of it. Histiocytosis is quite rare in other breeds with the exception of Flat Coated Retrievers, but it is the most common cancer in Bernese Mountain Dogs comprising 25% of all cases.”

We love how ever-protective yet sweet-natured the German Shepherd is. Cancer incidences in this dog breed are quite high.

Beagles are super cheerful and friendly, and it’s easy to fall in love with them. Sadly, this dog breed has a higher likelihood of getting cancer during their golden years, particularly bladder cancer, Bone cancer, prostate cancer, and Lymphoma.

You can’t think of the Cocker Spaniel without obsessing over its irresistibly attractive droopy ears and jovial personality.

The Cocker Spaniel breed is highly vulnerable to uncommon types of cancer, namely:

Popular for their distinctive black complexion, standard poodles are at greater risk of getting squamous cell carcinoma of the digit, or SCDD.

This type of cancer, which strikes in the toes, only affects dark-colored poodles.

According to the experts, incidences of Hemangiosarcoma are pretty high among this charming and cute little canine breed.

This fun-loving family dog has an increased risk of suffering from Lymphoma, Prostate cancer, and Gastric Carcinoma, a gruesome form of stomach cancer.

How to tell if your dog has cancer

In a world where we struggle to accept that our dogs die too early, the thought of them getting cancer, considering their short lifespan, is heartbreaking.

Besides genetic mutations, it’s hard to pin down other potential causes of cancer in dogs. But a cancer diagnosis doesn’t mean that’s the end of the road for your cherished canine buddy.

Some dog cancers can be treated and cured. And if there’s no cure, don’t despair. You can be sure that treatment will improve your dog’s quality of life. By far.

Early diagnosis and treatment can make all the difference in your dog’s quality of life. For this reason, you should prioritize regular vet checkups, even if your four-legged friend isn’t part of this list.

Cancer can happen to any dog breed during their lifetime,  it doesn’t discriminate. It’s only that some breeds have a higher risk of getting it compared to others, like the French Bulldog, Pomeranians, and Chihuahuas, known to have the lowest cancer rates.

If (God forbid) your pooch has cancer, early diagnosis will help them get started on the path to treatment and recovery before cancer does more harm to their body.

Along with regular checkups, it helps to closely monitor your dog’s health.

When your canine friend is developing cancer, there are common warning signs that manifest, which you should never ignore. You need to see your vet as soon as you notice something doesn’t “look right”, so your beloved pooch can undergo evaluation:

These common symptoms are:

If your four-legged buddy shows any of these symptoms or several at once, it doesn’t automatically mean they’re suffering from this dreaded disease.

What I’m simply trying to say is, don’t overlook these signs. Be sure to get your dog checked so the vet can rule out cancer.

Which dog breed has the lowest cancer rates?

Dogs breeds like the French Bulldog, Chihuahuas, Pomeranians, and Yorkshire Terriers have the lowest cancer incidences.

Do all dog breeds get cancer?

Any dog breed can get afflicted by this disease. The only difference is that some breeds have the highest risk of getting it, while for others, their risk is low. Cancer can affect any dog breed.

What breed of dog is prone to lymphoma?

There are several of them, including Golden Retrievers, Boxers, Labrador Retrievers, Great Danes, Rottweilers, Bernese Mountain Dog, and the Beagle.

Whilst any breed of dog can get cancer, there is evidence that dogs with white or light-colored coats are more prone to the disease.

Are cancer rates in dogs increasing?

However, other reports say that we can’t really say as there’s no database of cancer deaths in dogs available. Any report that canine cancer rates are increasing is purely anecdotal.

What breed of dog is least likely to get cancer?

Dog breeds that are said to be least likely to get cancer include Belgian Malinois, Papillon, Chihuahua, German Pinscher, and the Pomerian.

All dogs are at risk of cancer. As an owner, keep an eye on your pet for any signs as the earlier you catch it, the better the prognosis can be.