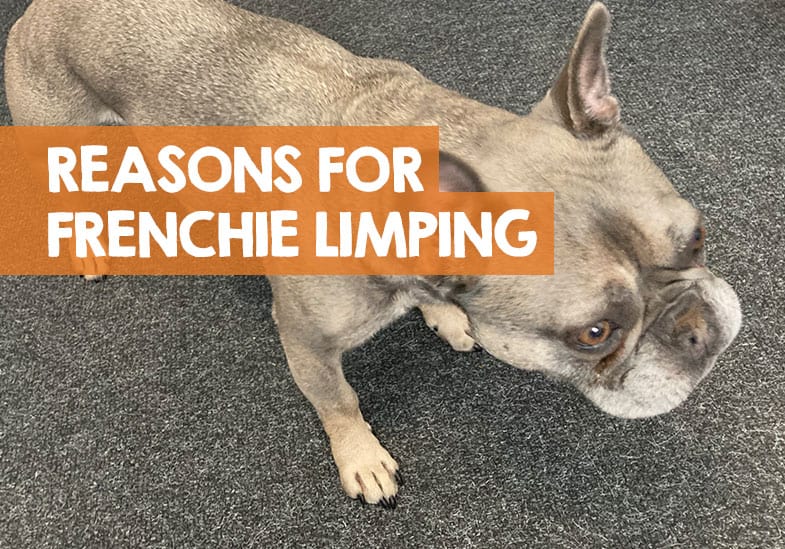 French Bulldogs are amazing pets, but they can often have a range of health issues due to the way in which they have been bred. One of the more common issues can be them developing limping on the back leg or front paws or showing signs of what could be lameness.

Some limping happens after sleeping and it will gradually wear off. With some limping you won’t even think your French Bulldog is in pain.

But it’s when the limping doesn’t quickly clear up within minutes but instead lasts for a few days it’s more serious. It most commonly is going to be attributed to a soft tissue injury or bone jar. This could be something like a sprain in your French Bulldog’s leg joints and tendons. These will often clear up inside of week when combined with vet-prescribed pain killers.

Whatever the scenario though, if you see your French Bulldog limping it’s worrying enough to want to know more and that’s what this guide is about.

Why? Because there will be times when a French Bulldog limping is something far more serious than just a strain. No matter what the situation, you should always call your own vet for professional advice if your French Bulldog suddenly starts limping. I am not a vet, but I do own a Frenchie so have been through all of this on a couple of occasions.

Why is my French Bulldog limping?

Most vets can quickly diagnose this type of injury and could prescribe canine pain killers to help alleviate your French Bulldog’s discomfort.

Given time to recuperate, rest, and trying to stop them from jumping and running, your French Bulldog should be better in just a few days. That means no walkies or indoor play!

If you haven’t yet called your own vet, here are some checks you can make which might indicate why your French Bulldog is limping:

When you call your vet, make a note of what you see, if anything.

When you should call a vet about your limping French Bulldog

If there’s nothing obvious around the paw or leg, and you still don’t know why your French Bulldog is limping, then call your vet and book an appointment in.

This is particular important if your French Bulldog wakes up from sleeping with a limp and shows no sign of the limp going inside of 30 minutes. Anything longer than and I would suggest it’s not a limp due to the way they have slept, but instead something different.

Here’s a list of reasons given by vets for why your French Bulldog has a limping back leg or starts limping on the front paws only.

From my own research and talking to a vet friend of mine, here are the most common causes of limping. Keep scrolling down for the more serious French Bulldog lameness symptoms.

One would hope that your French Bulldog’s limping back or front legs will quickly get better themselves. But there are more serious health conditions that limping legs are attributed to.

Many of the reasons I have already listed for French Bulldog lameness and limping will happen with the back and front legs. But there are some conditions which will only cause limps to one of the other.

Handy Hint: If you want to know more about hip dysplasia in French Bulldogs and what it means for your dog please check out the PDSA website. It explains what it is, how to treat it, and when to contact your vet.

How vets diagnose lameness and limping

Once you have booked an appointment in with your vet, they will do a manual check of your French Bulldog using just their hands. They will press and pull to see what the cause could be. The check will go something like this:

If the manual checks don’t offer a conclusion on why your French Bulldog limps, there could be some more in-depth diagnosis test such as:

How to stop your French Bulldog from getting leg injuries

A lot of limping can be avoided, so here are a few tips on how to avoid those injuries in the first place.

According to the UK Kennel Club, 8.4% of French Bulldogs will suffer with a back or leg problem during their lifetime,

French Bulldogs are prone to limping injuries, some more serious than others. If you French Bulldog is limping on a paw and you cannot find any obvious reason for doing so, consult your vet.

Disclaimer: Please note that I am not a vet, and this isn’t intended to replace professional advice on what to do if your French Bulldog is limping on his back leg or front paws. Instead it’s an overview of what I have learned as a dog owner when my own was limping, plus what vets have told me. If you are at all concerned, please call your own vet.

Here are some more health-related French Bulldog articles that all owners of this breed should be aware of.