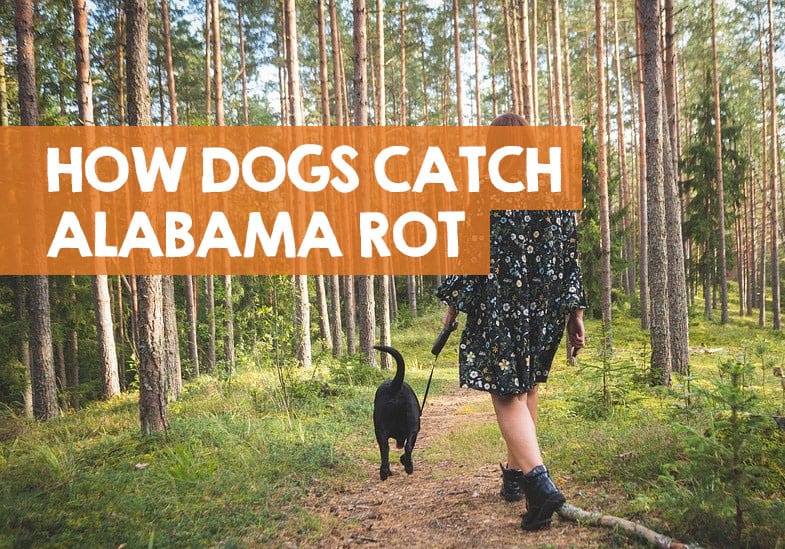 The name certainly sounds daunting and rightly so! In countries including the US and the UK, Alabama rot has caused dog owners some concern since it’s such a mysterious disease. No one wants their dog to suffer with painful sores and kidney problems!

As a dog owner yourself you may be looking for ways to avert this problem. Have you wondered how do dogs catch Alabama rot? I did, which is why I researched it online.

It’s important to note that I am not a vet, but here’s what I found out about how dogs catch Alabama Rot, I hope it helps you prevent this happening to your pet.

From what I have read, the exact reason for catching Alabama rot has never been pinpointed. But there are a few measures you can put in place to give you peace of mind that you’re doing all you can to protect your canine friend from dying because of this condition.

What is Alabama rot exactly?

The disease mainly affects the skin and kidneys of dogs. It results in damage to or blockages in the blood vessels of the skin and kidneys. This can lead to kidney failure and dogs will have lesions on their skin, usually on their legs. The disease actually causes the dog’s skin to start rotting, and this is where the name comes from.

This disease was first noticed in the 1980s in Alabama in the US and it was specifically greyhounds that suffered from it. However, there were only limited cases in Alabama at that time and no clinical research was done.

Later on, there were cases reported in the UK. Based on reports it seems the two countries’ outbreaks were caused by the exact same disease, although there’s no scientific evidence for it. Also, with limited cases and research, there aren’t that many facts on this disease.

Unfortunately, Alabama rot is often a fatal disease, with a large percentage of dogs dying if they contract it.

Lesions on a dog’s legs are the most common visible sign and these will be sores that weren’t caused by any other injuries, such as scratches. In addition, you may also notice the following:

Kidney problems will follow quickly after the sores appear.

If your dog shows any of these symptoms, even though Alabama rot isn’t common, please get him or her checked out by a vet.

There is often a lapse of time—anything from one to 10 days—between first noticing lesions and your dog experiencing kidney failure. This shows the importance of taking prompt action if you suspect Alabama rot in your dog.

How is Alabama rot diagnosed?

Looking at the list of symptoms, you can see the way the disease shows itself is related to many other diseases too. This means you and your vet may not realize the dog has this rare condition until all other diseases are ruled out.

Also, because there’s so little known about this disease, there’s no single test your vet can do to confirm that it’s Alabama rot. In most cases, vets monitor a dog’s condition over a few days. To rule out other causes for the visible lesions, the vet will ask the dog owner for a detailed history of the dog and whether it suffered any recent injuries. If there’s no other explanation for the sores, it makes a more solid case for Alabama rot.

The vet can also run tests using the dog’s blood and urine. This will show whether there are any problems with kidney functioning and will help the vet determine an appropriate treatment plan.

If a dog has passed away, a vet can confirm Alabama rot by taking a sample of the dead animal’s kidney and examining it.

Where and how do dogs catch Alabama rot?

Currently, experts aren’t 100% sure about the cause of Alabama rot. Suggestions of causes include:

The available history on dogs that have contracted Alabama rot doesn’t give conclusive evidence about where they picked up the disease. In many cases the dogs had walked in wet, muddy areas, which causes experts to believe dogs are more likely to contract it in these marshy conditions.

However, there are so many dogs that are active in similar areas that never get Alabama rot. So, you don’t have to worry that your dog will get this sickness just because you’re taking him or her for a walk in the woods nearby your home.

Can you prevent Alabama rot?

It’s very difficult to prevent a disease that one knows so little about. For one thing, you can’t have your dog vaccinated against Alabama rot, because no vaccine exists. Experts know too little about it to develop preventative measures.

You can lower the risk of your dog contracting Alabama rot by following a few wise habits. Since some dogs get it after walking in wet conditions, always rub them down with a dry towel—especially their legs and lower parts of their bodies—after returning from a walk. You may even want to give them a proper wash.

It’s not a very common disease but if you want to play it safe, rather avoid walking in muddy areas.

You can also check your dog’s body regularly for tell-tale signs, such as bruises, bumps and sores. If there’s no explanation for the dog having those physical signs, take them to the vet immediately. Early diagnosis may prevent the disease from becoming fatal.

From what I have read, only around 30% of dogs with Alabama rot may make a recovery. Your vet will only be able to treat the symptoms that appear because of the disease, such as helping sores to heal or trying to improve kidney functioning with medication. While the lesions can often only require non-invasive treatment, if the dog develops kidney problems, supportive care of an intensive nature is the only option.

In cases where the dog responds well to these treatments, there is a chance of it recovering.

What to do when your dog has Alabama rot

If you suspect Alabama rot in your dog, know that you can’t treat the dog on your own. Within days, the disease may start affecting the kidneys, for which expert veterinary intervention is necessary. And the sooner treatment starts, the better your dog’s chances will be of surviving. So, at the first signs of this disease, make an appointment with your vet.

Will Alabama rot spread to your other pets?

If your dog does ever contract Alabama rot, you can rest easy when it comes to other pets. There’s no hard evidence that the other dogs in your home will automatically catch the disease. However, although the disease was noticed mostly in greyhounds, any breed of dog can contract it.

In addition, there hasn’t been confirmed cases of other house pets like cats, mice or birds becoming sick with a similar disease. So, in most cases you will only have to concern yourself with looking after the animal that first became sick.

There haven’t been any cases of humans getting Alabama rot, so as far as facts can prove, it’s safe for you to touch and treat your dog if he or she becomes sick.

This article is not intended to replace professional veterinarian advice. It is a result of my own research into how dogs catch Alabama Rot. Please do your own research and consult with a professional for expert guidance.