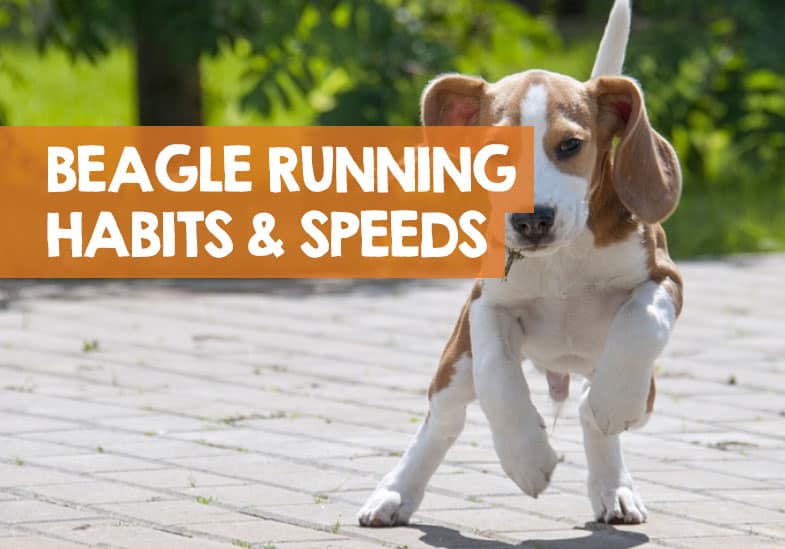 Beagles are known for their high stamina, top running speeds, and hunting roots so it’s no surprise that this breed is one of the more athletic dogs. They’re a brilliant companion for athletically inclined owners, but their fast-paced and somewhat impulsive nature means that caring for them can be challenging at times – especially when they test your patience by running away!

You will need to be quick, because Beagles can run fast. But how fast exactly and what is the average Beagle’s top speed? I decided to find out…

How fast can a Beagle run? A Beagle can run as fast as 20 miles per hour (32.2 km/h). There will be some Beagles that have a higher max speed than this, as a Beagle’s running speed will depend on their gender, size, and overall health.

So that’s a very generic answer. In truth, you might have Beagle that runs faster than this, as they all are very different. If you have, I would love to hear what your average Beagle speed is. You can measure it for yourself – here’s a video from YouTube where I measured the speed of our Frenchie – you can do the same speed test with a Beagle.

Why Beagles can run fast?

I don’t own a Beagle myself, although my friend does have a particularly fast one. I asked him why Beagles have such good running speeds and he pointed me towards this reference on Wikipedia about this breed’s heritage. Here’s what it says which must relate to their running habits:

“In the 11th century, William the Conqueror brought the Talbot hound to Britain. The Talbot was a predominantly white, slow, deep-throated, scent hound derived from the St. Hubert Hound which had been developed in the 8th century. At some point the English Talbots were crossed with Greyhounds to give them an extra turn of speed.”

Want to know more about Beagles and running? I got you covered; with all conceivable things you now might want to know.

Can Beagles run long distances / how far can they run?

Although Beagles are speedy, energetic and like to charge when they pick up a scent, you shouldn’t expect them to be running marathons and very long distances with you anytime soon.

This is because Beagles are sprinters rather than long distance runners, meaning that whilst they can run very fast at short distances, they don’t have the stamina to sustain that for very long. But how do you define a short distance in terms of how far a Beagle can run?

How many miles can a beagle run? Beagles can usually run a few miles (the optimum number is 3 miles) before getting fatigued, but it does vary depending on the individual dog. Some may be able to stretch to 4 miles, whilst others may only be able to handle 1 or 2 miles.

Whilst it is possible to build up your Beagle’s endurance to run a little longer and more miles, this should be done gradually over a long period of time. You should keep your vet in the loop and make sure to stop at any sign of fatigue.

Can I take my Beagle running?

Beagles love running fast, but as I’ve mentioned, it’s best for just short distances. You can take your Beagle running, but only for runs of a couple of miles. It depends on your dog, but I certainly wouldn’t exceed a couple of miles running at first to see how they react.

We own a Frenchie, and our friend made the mistake of taking him running on a 5k jog once. Whilst he was able to manage it, he ended up in a lot of pain 24 hours later. Don’t make the same mistake with your Beagle.

Handy Hint: Due to their high energy levels, Beagles can often develop limping problems. Here’s how to diagnose a limp in your dog.

As for Beagles, their sense of smell is on the higher end of a spectrum, as they have been bred for generations to be hunting hounds, who find their prey via their scent.

Whilst humans have around 5 million scent glands, Beagles on average have 200 million. This means that they are a lot more sensitive to smell than humans.

But, why does this matter?

Well, Beagles, as scent hounds, have been bred over generations to chase after scents. This means that even if your Beagle wasn’t a scent hound in the past, they will still get the instinct sometimes to chase after a specific scent – and that means a lot of running!

Handy Hint: If you Beagle starts throwing up after exercise he might have pushed himself too hard, but here are other reasons for your Beagle vomiting so much.

Beagles can pick up most scents up to a mile away, and as well as that they’re especially susceptible to the scent of a female dog in heat – they can pick this up even if the dog is 2 to 3 miles away.

But why does your Beagle run away?

Your Beagle could run away due to a scent picked up. One of the more common reasons for a Beagle running away can be a female dog in heat.

Beagles can also pick up the different pheromones of different dogs, which tells them various information like the dog’s gender, health and mood.

Oftentimes, Beagles will in turn run to find other dogs because they’re nosy and want to suss it out for themselves!

Beagles rarely run away from things – they’re more likely to be running to something and tracking a smell. Maybe someone is barbecuing sausages a while away and they can smell those tasty meat juices.

Therefore, although it might look like your Beagle is running with no objective or direction in mind, this couldn’t be further from the truth.

By chasing scents and running, they are just following natural instincts. After all, with their lean athletic build and ample sense of smell, it is clearly something they are born to do.

How can I stop my Beagle from running away?

There isn’t a lot you can do to curb your Beagle’s natural instincts, but you can give them less opportunity to run off.

One way to do this is by keeping them on a lead when you go on walks. An extendable lead is useful because you can give them the freedom to run around and exercise but stop them from getting too far away and becoming lost. Alternatively, you can try a harness rather than a leash if you think that you need better control.

Another way is to make sure you give them plenty of exercise. You should walk your Beagle at least once a day for around half an hour and, on top of that, give them more intense cardio exercise 1 to 2 times a week (try a game such as ‘fetch’ which encourages them to run).

If they don’t have any excess energy, they will be less inclined to run away fast after random scents!

If your dog enjoys a game of chase, by running after him might it could make him want to keep running. Try to change directions so he thinks it’s his turn to chase you.

You could also try sitting down (or even lying down) whilst he is still in view – it might make him curious and want to come back and check on you.

If your Beagle is playing in the yard, you should always supervise him in case he is tempted to bolt. You could also work to make your yard more secure with extra fencing or other containment materials.

Beagles love to run, and when they get going, they can run very fast! In fact, due to their hunting instincts, Beagles run a lot faster than the average dog.

They can also bolt off with little to no warning, so make sure you’re prepared for that when you’re out and about as they can run away from time to time. There are renowned as being hyper dogs, but they can calm down over time!

Provided you are ready for that, you are all set for lots of fun adventures with your little sprinter!

However, as someone who frequently walks a Beagle for our friends, I can tell you that the benefits largely outweigh the challenges.

Whenever the Beagle shoots across the dog park, myself and my wife always all look on in awe, asking ourselves: ‘Just how far can a Beagle actually run?’. I hope I’ve now answered that for you!