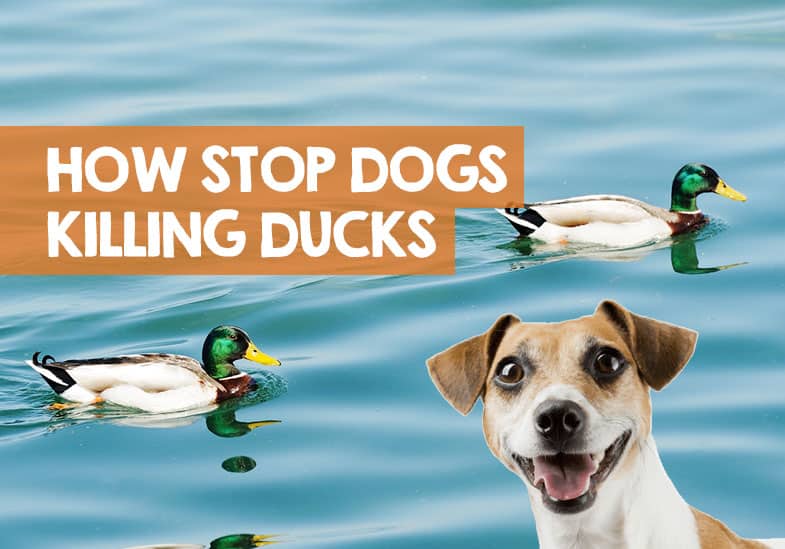 Raising ducks in close proximity to dogs will come with some challenges. Many dogs, and specific breeds in particular, will try to attack ducks. It is not uncommon for family dogs to attack and kill ducks from time to time – sometimes by accidents, or even deliberately.

Thankfully, regardless of whether you are thinking about buying ducks or are the current owner of a brood, or even come across them when on walks, training your dog to leave the ducks alone can be achieved; sometimes.

You will need patience, hours of practice, and a willingness to try various methods to prevent your dog attacking the ducks, rather than just trying to make behavioral changes.

How to stop a dog from killing ducks

Having spoken to owners of both animals, I believe the following is the best way to stop a dog from killing ducks.

If you are introducing your dogs to ducks for the first time, make sure to securely leash them to a post or fence in your yard. From here, you can pick up a duck (make sure you are holding it firmly) and take it over towards your dog.

If your dog begins to frantically pull and jump towards you, trying to attack the duck, back away a few steps, and wait for them to calm down. Once they are more relaxed, approach them again and bring the duck a little closer.

Before we continue, it is important to note that you should stop if this method is stressful for both your dog and the duck and try again later.

However, if all goes well, begin repeating the command “leave it” and gently push your pooch away whenever they show too much interest in the duck. Likewise, reward your pooch with treats when their attention is on you instead of the duckling.

Over several days, you can try this method several times, gradually bringing the bird a little closer and continuing to repeat the command “leave it” if your pup shows too much interest in the bird.

In time, this could mean that you have managed to stop your dog from attacking the ducks. It isn’t foolproof… dogs have an in-built prey drive (some lower than others though).

But this method is a great way to get new dogs and puppies familiarized with ducks and after some time you can try allowing your dog to roam in an area of the yard on a long leash.

After leashing your dog, make sure the ducks have enough room to escape and encourage them to run – this will likely trigger your dog’s instinct to chase.

If your dog tries to chase, remain patient, approach or cut off your pup’s flight, and take them back to their original spot, gently but firmly rebuking them with a “leave it” command.

Repeat this exercise several times over a few weeks and reward them when they no longer give chase or when they listen and respond to your command “leave it”.

Finally, if you feel confident in your dog’s new-found ability to stop attacking and trying to kill the ducks, try walking them on a long leash around your ducks.

If you notice that they do not react or show any interest, allow them off the lead (always ensuring the ducks have a place they can escape to).

Stay close to your dog and watch them for any signs of aggression or chase instinct. If they begin running, do not punish or scold them, instead put them back on the leash. With time, they should lose interest in the ducks entirely and be trusted enough to roam around the yard without any incidents.

In the case of dogs who have already killed multiple ducks, teaching them the stop and pull method can go a long way in curbing their behavior.

Similar to the previous method, you will have to put your dog on a leash first, preferably using a harness if you have one available. Next, check that your ducks are locked up in their coop safely, and then approach it slowly with your dog still on the leash.

If your dog tries to lunge or pull you towards the ducks or begins to growl or snarl, firmly shout “NO” and turn your dog away from the coop and walk briskly away.

Keep practicing this on a daily basis until your dog associates his behavior with negative ramifications.

After several weeks (or months, depending on the dog), your pooch should begin to behave normally around the brood.

From this point, you can try introducing them to birds around the yard whilst on the lead.

As mentioned, this isn’t a foolproof way to stop your dog killing ducks but can work with many dogs. If all else fails, you will need to keep them very separate and make adjustments to how they live.

There are many different reasons why dogs will kill ducks. Some of it is down to wanting to have fun and chasing as a natural instinct.

Here’s are some other ways you can try to stop your dog killing ducks by curbing your dog’s in-built behaviors, reducing risk, and increase the chances of your dog attacking ducks.

Another way you can prevent a dog attacking ducks is to better understand why they have this desire to kill ducks in the first place.

Why do dogs kill ducks?

When it comes to working dogs, the desire to chase and potentially kill ducks is very strong. You might wonder how big a part that plays when considering why your dog kills ducks… well, it’s all about the breed.

These breeds, bred for tasks such as sheep herding and chasing down vermin, have hundreds of years of instincts to try and overcome. Unfortunately, for many dogs, these instincts can prove too tempting, and they will give chase to ducks regardless of the commands you frantically shout at them.

For some dogs, typically those of a sheep-herding breed, chasing does not necessarily lead to the death of birds. For example, Border Collies will very rarely kill ducks, instead preferring to round them up or chase them into a confined area. However, this experience can still be terrifying for ducks who are not used to this behavior and the situation can quickly turn sour if not dealt with promptly.

On the other hand, when it comes to breeds with a long history of rat-hunting, rabbit-chasing, and other forms of hunting (like West Highland White Terriers, Greyhounds, or Jack Russel Terriers) the pursuit of ducks regularly turns bloody and violent.

Circling back to the exact reason why dogs kill ducks, it is important to remember that canines are predatory animals. Although your dog may love cuddles, toys, treats, bones, belly rubs, and blankets, deep down they are still an ancestor of the wolf with partial amounts of their instincts still kicking around in them.

Likewise, despite your dog (and almost all dogs on the planet) no longer needing to hunt to survive, the desire to hunt and kill can sometimes arise within them. This is often triggered by their instinct to chase, which can happen when they see a small animal, bird, or the aforementioned duck scuttling away in fear.

Which dog breeds kill ducks the most?

Understanding which breeds are the most at risk of killing ducks can help you to plan ahead before purchasing a brood. As previously mentioned, hunting breeds are often the biggest culprits when it comes to killing ducks.

However, other types of dogs do still prey on ducks from time to time. Below, you will find a list of some of the dog breeds most prone for doing this.

Living or spending time in the countryside is one of life’s greatest pleasures. For those of us who crave a little more solitude and an escape from the busy and bustling pace of cities, visiting the countryside can provide a release, and for some, moving there permanently can seem the next best step.

From here, owning ducks or other farmyard animals becomes natural, and according to the accounts of many first-time duck owners, raising these eccentric birds is an incredibly satisfying and rewarding experience.

But throw dogs into the mix and things get a little different.

Dogs can cause havoc with terrified ducks and ducklings. This can quickly become a serious ongoing problem if not dealt with immediately and can lead to feelings of frustration between you and your pooch, as well as further behavioral issues for your pup down the line.

But it is possible to stop your dog attacking and killing ducks, sometimes it’s best to simply place barriers.

Teaching a young dog or puppy to refrain from harassing or chasing ducks can prove futile without the proper knowledge of how to deal with this problem. Unfortunately, this can cause a lot of stress for even the most patient and understanding of owners, and for some, these issues are enough to convince them to give up owning ducks for good.

Hopefully, with this information close at hand, you will be able to create an environment in which your dog and ducks thrive together in close proximity without attacks and kills.

More guidance on living with dogs and birds below.