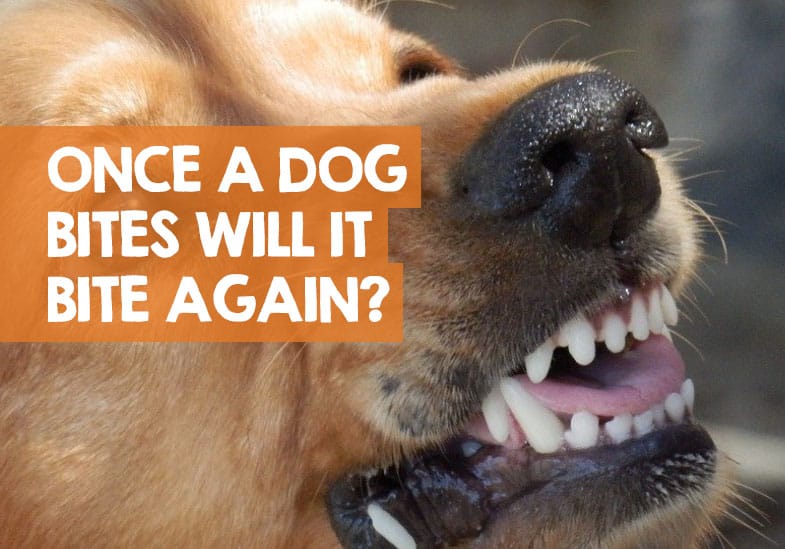 When your usually docile and happy pup suddenly starts biting people, it can be a scary and unsettling time for both dog and owner. If your dog suddenly bites someone for the first time, it can come as a surprise, and can potentially have very serious implications.

But what we need to remember is that any animal with a mouth can bite. Whether your dog is known for biting or has never bitten someone in their life, there is always a risk of biting happening – and that is a risk that you, as an owner, must always be aware and responsible for.

I’ve lost count of the amount of dog owners I’ve heard say that their dog would never bite, only to get a nasty surprise further down the line.

Many of them will then roll out the old saying that “once a dog bites it will bite again” and again, and again. But how much truth is actually in this, and if your dog has bitten for the first time, what are the chances of it repeating the behavior?

Here’s what I found out after talking to vets and animal behaviorists.

Once a dog bites will it bite again? Whether your dog bites again really depends. For example, a dog’s bite can be seen as being the result either a physical (i.e. illness) or a behavioral (i.e. lack of training) issue. If these underlying issues causing your dog to bite are resolved, then they are unlikely to bite again for that reason.

There no hard and fast rule to the question of “if a dog bites will it bite again” – there’s no scientific evidence to say either way.

In order to establish whether or not if a dog bites will it bite again, it is useful to think about the reasons why your dog might bite in the first place.

As you will see, there are many reasons why your dog might start biting, with a lot of these being entirely preventable or having understandable, instinctive roots.

We will go through some of these reasons here.

Your dog may snap at someone if they feel threatened. A number of things can set off this feeling of threat.

If a person is invading their space or pushing their boundaries, even within the context of play, your dog might get defensive and worry that they’ll be hurt, so they’ll bite in order to protect themselves.

This is especially true if the person approaching your dog is someone they haven’t come across before – what they might see as a friendly pat in the street your dog will see as them reaching their hand out to attack them.

This sense of defence and danger might extend to a dog who has puppies or co-habits with other dogs. If they see their puppy or a member of their ‘pack’ being approached by what they perceive as a ‘threat’, they may snap on their behalf because, instinctively, they feel a need to protect them – whether that instinct be parental or based on being ‘leader’ of the pack.

Another part of your dog’s instincts concerns territory. As animals, dogs are known to very territorial – clearly marking their scent to what they deem is theirs and not reacting kindly to anything that they deem to be an infringement on that territory.

So, if a postman comes to your house and tries to interact with your dog, they may end up biting them because they see them as infringing on their territory, which once again makes the act of biting more about defence that offence.

In the dog’s mind, they are simply protecting what’s theirs by biting anyone who threatens to step onto their territory.

Lots of things can make a dog fearful. If they are a rescue dog or previously lived in the streets or an abusive household, they may have learnt to associate humans with mistreatment, making them instantly on the defensive and likely to attack a human when they see them, no matter how nice they may be.

These circumstances aside, what triggers your dog’s fear depends on their own individual personality and temperament. It might be going to the vets or certain locations, smells or sounds.

Speaking of sounds, it is important to remember that just like humans, dogs can get easily startled. This might be through being awakened randomly, having someone approaching them from behind or hearing a sudden sound.

Most dogs don’t like surprises and are likely to perceive them as a danger. This then brings us back to those defensive instincts, which can lead to them biting a human if they are in their peripheral.

If your dog is in pain or not feeling themselves, they may not want to be touched in a certain area – or interact with humans even if they are usually fine with it.

Their tolerance for situations and threshold for interactions will be very different, as a lot of their energy is occupied with dealing with their ailment.

Dog bites are classified in six different ways based on their severity and impact.

Although some might say it is difficult to predict when your dog might bite or bite again, there are some tell-tale signs that you should learn to look out for.

What to do when your dog bites someone

When your dog bites someone, it is important to put your personal feelings aside and do the right thing by the victim.

The next step is to confine your dog somewhere safe so they can’t hurt themselves or anyone else. Once your dog bites a person, you don’t want it to bite again. You can secure your dog in a crate, a pet carrier or – if you’re out and about – on a short lead.

Then, you should help the wash the wound with water or – more ideally – a sterile solution like antiseptic to help avoid infection.

You should then contact the relevant local authorities and be compliant – they’ll be involved either way so it’s worthwhile making the process as smooth and productive as possible.

The final step is to exchange information with the victim. This is important because they may need to contact you regarding the incident.

It might be stressful thinking about the implications for your dog, but it is important to do the morally right thing in this situation – especially if someone has gotten hurt.

Now I’ve hopefully given you more information about why dogs bites and once they do, will they bite again, I wanted to share more things I’ve learned… read more about dog bites below.

Do dogs feel guilty after they bite?

Whilst there is no evidence to suggest dogs feel guilty after they bite someone, many owners will say their dog looks guilty after it’s been scolded.

However, experts believe that guilt is an emotion that dogs don’t actually feel. You can read more about this on the Scientific American website.

Yes, they can, and this is particularly common during play and teething. You can see a photo of my own dog below who was ready to bite me as a puppy – it was all just play though!

Ultimately, although it is a common argument that if your dog bites you once it will bite again, this isn’t necessarily true. Equally, just because your dog has snapped and bitten someone once, that doesn’t instantaneously mean that they will be put down.

What your dog biting does indicate is a wider issue that needs to urgently be addressed – whether that be behavioural or medical. Either way, it is important to consult a vet or behaviourist or trainer immediately so they can guide you on the appropriate way forward.

Disclaimer: I am not a vet, legal professional or dog behaviourist. I can only talk from my perspective as a dog owner alongside any additional research I have done.