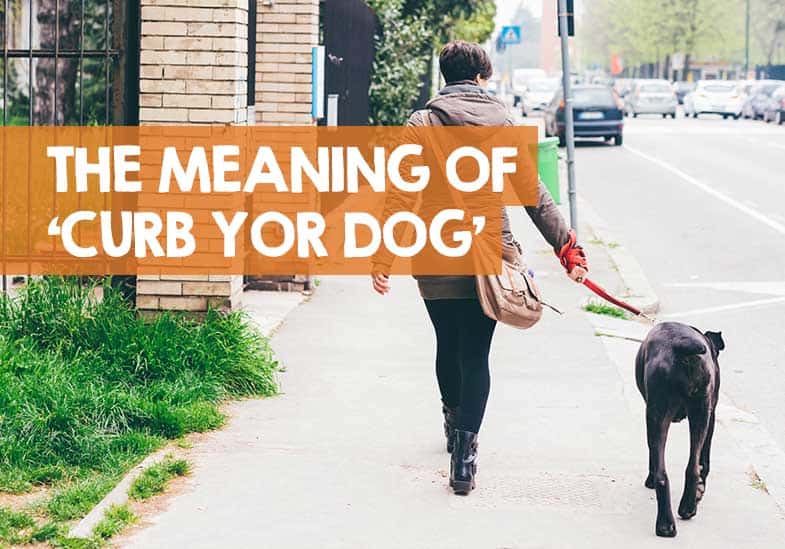 How up to date are you with canine etiquette? For example, are you one of those dog owners who get frowns from all around when in public areas and you’re not even sure why?

The thing is, we live in a society where people have different perceptions, so we won’t always agree on everything. We all know that sometimes we need to compromise or abide by the rules to ensure an organized community. The problem comes when some of these rules are unspoken or not as clear as people think they are.

One such expression is ‘curb your dog’…. Let me explain.

What does curb your dog mean? When you are told to curb your dog, it means to either keep it under control and on a leash, or to ensure its excrement doesn’t soil public areas. For the latter, it basically means to always pick up the poop.

The meaning of having to curb your dog

I hadn’t heard this expression before, until I moved to a new city and was walking my dog for the first time locally. To get to the park I had to walk down a few streets. I kept my dog and I on the curb and was very surprised when someone yelled ‘curb your dog’ when my four-legged friend simply sniffed at their feet.

We were near the curb, but I don’t want to walk in the street, so what more was I supposed to do? Sounds funny, and I am sure you’d agree I did look a bit foolish.

The matter got even more complicated when I saw a sign on the park entrance saying, ‘curb your dog’. There were no curbs inside the grassy area. What was going on?

With multiple meanings it’s clear why different people and communities could have different perspectives on this. People see the curb your dog sign in NYC, Long Island, Chicago, and more… and some will need clarity on what it means.

It also means that if someone yells the phrase at you, you’ll need to look at the context in order to make sure you don’t offend again—or you can decide whether someone is just being oversensitive.

So, let’s unpack the curbing matter.

Where did the term ‘curb your dog’ originate?

It may help to know why this term became part of our language.

The first use of this phrase dates back to the 1930s in New York. Something needed to be done because New York had many dog owners and locals were becoming perturbed about all the dog waste ruining their sidewalks and the areas close to buildings.

Regulations then stated that people were required to take their dogs to the curb so it can soil in the street or the gutter, not the sidewalk.

In the street? How is this better? Remember that a few decades ago horses were still common in the streets. Therefore, it was acceptable for animal waste to be in the street, but people wanted their sidewalks clean.

Since dogs also enjoy lifting their legs against objects like buildings, the idea was to communicate that dog owners must ensure their canines do all their business away from the spaces where people walked.

So, that’s what curb your dog means in NYC; don’t let your dog foul the public areas in New York City.

To support this motion to keep sidewalks and buildings clean, signs were placed everywhere with the phrase ‘curb your dog’. Now, even though times have changed, the words stuck. But the meaning has altered slightly.

Another law that helped the phrase to evolve was the Pooper-Scooper Law. In 1978, New York actually saw dog waste as a health and environmental concern. This prompted a law that demanded all dog excrement in public areas be picked up and discarded of properly.

You can read more about it on the American Kennel Club website:

“The city was struggling, out of cash, and riddled with crime. Its streets, once fabled for being paved with gold, were encrusted with dog waste, an estimated 500,000 pounds of it a day. Trendsetters that they are, New Yorkers came up with a novel solution—New York State Public Health Law 1310, formally known as the Canine Waste Law. Or, as it’s affectionately called today, the Poop Scoop Law.” (view source)

But it’s just a little dog poo! What can it do?

Of course your one dog’s excrement won’t ruin the city, but dog feces do carry E.coli. When all the dogs in the city can simply mess where they want, it could cause a problem for the urban environment.

This explains why across the world it has become the norm to carry a pooper-scooper or a bag with you during dog walks, to remove your dog’s waste – yes, in order to curb your dog.

So, what does curbing your dog really mean?

If one looks at language, ‘curb’ could also refer to ‘controlling’. So, now you have history and language that lead to different interpretations. You need to consider the phrase in context to understand how a person is applying it.

Now, in the 21st century, in most cases it will be one of the following.

For many people ‘curbing your dog’ is a quick way to say ‘keep your dog under control’. This can apply if anyone feels that what you’re doing with your dog while you’re in public—not in your own property—isn’t acceptable.

The problem is that people view situations differently. Some may enjoy the attention of a dog saying ‘hallo’ by sniffing their feet, while others don’t want dogs near them. You may have to err on the side of caution and rather keep your dog away from everyone as far as possible.

Of course, controlling can then also refer to:

The original phrase mostly referred to the topic of dog waste, so it’s important to consider how that applies today.

Of course, you’re not going to take your dog to poo in the street, since these days there are cars running by and no horses leaving their waste there. Some people will still mean that your dog should defecate at the curb, but leaving the poo in the gutters is not the norm anymore. You’ll need to pick it.

So why at the curb? Any residue will at least be taken care of by street sweepers and not stick to the shoes of those using the sidewalk.

What has become the most important is cleaning up after your dog. Carrying a bag with you and picking up the waste so you can discard it is essential etiquette all dog owners should follow in towns and cities.

Someone frowning at you for allowing your dog to mess in public—like a park—is probably hoping you have a bag on hand to clean up afterward.

Remember, not all people are dog lovers. They may be critical of any of your dog’s actions and to ensure a healthy environment for all it is important to make sure you don’t add to the waste problem of your city.

Keep an eye out—Curb your dog signs are everywhere

Now that you know about this topic, you may notice many signs around your neighborhood referring to curbing. Analyze the sign based on this information.

A ‘curb your dog’ sign in a street may refer to not allowing it to mess on the sidewalk while in a park it could mean leashes are mandatory.

How do you curb your dog?

Knowing about the expectations is easier than enforcing them though, right? If your dog is anything like mine, it usually decides to ‘go’ where it shouldn’t. And I may notice it too late to take the dog to the physical curb.

Be smart and train your dog to only defecate where it will be acceptable. Use the same way you taught your canine—usually with positive reinforcement—to mess outside and not inside the house. It will learn to leave poo in spots where you can easily pick it up and where you’ll get the least number of frowns from passersby.