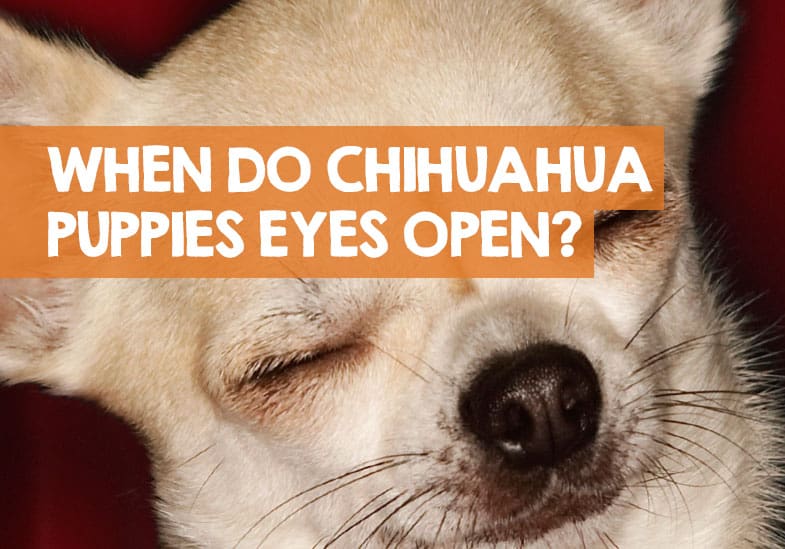 Chihuahua puppies are extremely delicate and needs lots of care, particularly as newborns in the first few 4 weeks of their life. Their eyes are still closed shut, so they can easily fall and injure themselves. They are completely dependent on their mother so when can you expect your Chihuahua puppies’ eyes to open?

When do Chihuahua puppies open their eyes? Chihuahua puppies’ eyes open between 10 and 14 days after birth. Despite the eyes no longer being closed, eyesight will remain poor, and they will only really see their mother and siblings. Chihuahua eyes won’t clear completely for full vision until the 8-week point.

When do Chihuahua puppies’ ears open?

Whilst Chihuahua puppies’ eyes open up by the 14th day, the ears don’t fully open up until just afterwards. It can be a few days before the ears completely open allowing them to hear properly, usually at around 3 weeks of age.

Before these two points in their development, Chihuahua puppies can only navigate their new world using the power of scent. Born deaf and blind, it won’t be long before they are scampering around exploring all the new and exciting things the world can offer.

That last step on the development phase is interesting isn’t it? Yes, the eyes of your Chihuahua puppy will actually change color as they get older. They will also lose their baby teeth, and grow adult ones!

Most Chihuahua puppies are born with blue eyes, or at least a paler version of their final color. Regardless, by 10 to 16 weeks old, your Chihuahua puppy’s eyes will have changed color to their permanent shade.

The reasons your Chihuahua puppy’s eyes change color is because during their first few months of life their eye’s iris has no melanin. As they grow, the melanin concentration increases, leading to the final color change.

Handy Hint: Ever wondered how many puppies Chihuahuas will have? I wrote a guide about the average litter size for this breed with all the answers.

Do Chihuahua puppies born with their eyes closed?

Back to the main topic, and there’s a good reason why your Chihuahua was born with his or her eyes closed. It’s all down to evolution and survival, harking back to the days when dogs were still wolves living in packs.

According to the Psychology Today website (read source), a mother would find hunting and survival very hard if she had to spend a long time carrying a litter of puppies.

Fast forward to today, and this means that the gestation period of a Chihuahua is relatively short, coming it somewhere between 58 and 68 days. In reality, it could be longer allowing for her puppies to open their eyes and ears… but instead, they are born without the development of a full set of senses.

When can Chihuahua puppies leave their mother?

Another aspect I placed on the development phases timeline was guidance on when the puppies can leave their mother. Obviously, it’s imperative that the Chihuahua’s eyes and ears are open fully and functional before this happens.

Please don’t ever take a Chihuahua puppy away from their mother before this point. It’s hugely irresponsible and can lead to health and mental development issues for the puppy.

Handy Hint: The ears are another interesting aspect to the Chihuahua’s puppy development. Typically the ears will stand up after 15 weeks, but not always. Here’s my guide to what to expect with floppy or erect ears.

During the first two weeks of life, Chihuahua puppies don’t actually need to be able to see and hear in order to get along. The mother will keep them safe and secure, and they can latch onto her by instinct due to smell and touch alone.

Once the two-week stage passes, the development of the Chihuahua puppies will be really quick. Their eyes will open, hearing will develop, and they will move freely about. You might even hear them making some little bark noises at the 5-week point!

It’s truly a magical in the development of a Chihuahua puppy, and when they open their eyes, just imagine what it must be like for them too!

Handy Hint: Here are some tips on how you can successfully potty train your Chihuahua puppy

Header image photo of a Chihuahua with closed eyes licensed from StockUnlimited.com.