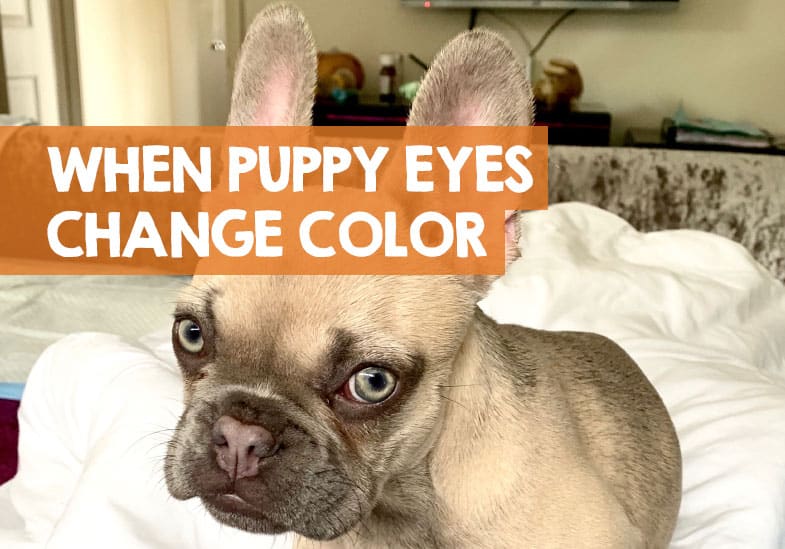 Given what we know then, when do puppies eye change color from blue to something else? Here’s all you need to know in one handy guide to puppy eye color, and when you can expect the changes to happen.

When do puppies’ eyes change color? Puppies’ eyes typically change color from blue to the final color at the 9 to 12-week point in their development. After this, your puppy’s eyes should now be the permanent color that will remain into adulthood.

When do puppies eye change color from blue?

After puppies have opened their eyes, they will be blue in color. It takes several weeks for their eyesight to fully mature and become sharp, and then the color to change.

Before this occurs, they will lack the same range of vision as an adult dog and will occasionally bump into or stumble over items around the home.

Likewise, similar to their vision, it will take them several weeks to start developing melanin in their eyes – this melanin is directly responsible for the eye color they will develop, with larger amounts of melanin giving them darker eyes, and smaller amounts giving them lighter.

Due to this, you will rarely see a rapid change in a puppy’s eye color overnight, instead, the change will be gradual, finishing after 9 to 12 weeks.

In fact, it could take up to 3 to 4 weeks before their eyes have fully developed into the permanent color they will have as adult dogs instead of the blue they are born with.

Why are puppies born with blue eyes?

The reason why puppies have blue eyes when they are born is quite simple, it comes down to a lack of melanin in their irises, which only begins to develop as they get older.

Due to this absence of melanin, their eyes appear to look bluish, however, they are more of a clear color. To further expand on this, the blue appearance in their irises is caused by the lack of melanin coupled with the refraction and reflection of light.

If you are the owner of a litter of newborn puppies, you will probably have noticed that their eyes will not have opened yet. In fact, for the first 8 to 14 days they will remain tightly closed.

During this time, they will effectively be blind and will use their paws and nose to feel around their environment, usually whilst on the lookout for mom.

Handy Hint: If your puppy ends up blind it’s not a reason to have them put down. Blind dogs can lead very happy lives.

Also, they will climb over or under their siblings to get to wherever they want to be, which can be a cute thing to observe.

After this time has passed, a puppy’s eyes will slowly begin to open, giving you the chance to see them for the first time. More often than not, they will be a foggy shade of blue.

However, some puppies will be born with eyes that are slightly greyer or a different shade of blue.

It can be a lovely experience to see your puppy’s eyes for the first time, and many owners cherish this memory for the rest of their lives.

Due to this, it pays to keep a close eye on your puppies at this early stage in life so that you do not miss out. When we look into our puppy’s eyes, it can invoke an emotional connection and begin a bond that can last a lifetime.

What is the most common eye color for dogs?

By far, the most common eye color for a dog is brown. However, this shade of brown can vary massively depending on the breed.

Certain dogs will have light brown eyes, whilst others will have a darker shade. Interestingly, the darker brown color can often appear black depending on different lighting.

How can you tell if your puppy will have blue eyes?

You can usually tell if your puppy will have blue eyes permanently by taking a look at the eye color of its parents.

Furthermore, the type of breed the puppy belongs to can also affect this, with certain breeds being more likely to have brown eyes compared to other breeds.

However, any breed of dog can develop brown eyes, and it is more likely that a puppy will develop this color compared to others.

What are the reasons for the puppy eye color change from blue?

As touched on above, melanin plays an important role in the type of color a puppy’s eyes will develop into.

However, other factors can play a role in this, too. For example, there is some evidence that shows that puppies with liver-colored fur may have a gene that is responsible for giving them amber eyes.

Furthermore, these amber eyes can vary a lot depending on the breed, ranging from yellow to shades of gray.

Similarly, puppy’s with Merle (also known as dappled) coats are more likely to retain their blue eyes into adulthood.

The reason for this is down to the merle gene, which is responsible for modifying the dark pigment in the eyes of most dogs who display this pattern.

Although blue is the most common color, dogs with merle can often experience random mutations, sometimes displaying two different colored eyes – this condition is known as heterochromia.

Huskies are another breed of dog which are well known for their striking blue eyes – which look stunning once the puppy open them!

However, unlike the blue eyes found in breeds like Border Collies, Old English sheepdogs, and both Welsh and Pembroke corgis, Huskies are unique in the fact that they do not need to inherit these blue eyes from their parents.

Instead, Huskies get their unusual blue eyes from a mutation that occurs near a gene called ALX4 which is found on canine chromosome 18.

To spare you the scientific mumbo jumbo, this essentially means that if you own a husky pup, the chances of them having blue eyes is extremely high when compared to other breeds.

Additionally, the color of a puppy’s coat can usually provide a clue to the eye color it will have in adulthood. Therefore, puppies with darker coats show a greater chance of developing darker eyes, whilst puppies with lighter coats show exactly the opposite.

What is Heterochromia and can a puppy develop it?

Heterochromia is a beautiful phenomenon that occurs when dogs have two different colored eyes. This is common in breeds like Huskies, Australian Shepherds, and Border Collies.

Being completely harmless, it does not affect a dog’s vision, contrary to the belief of some.

Puppies can develop heterochromia in two different ways. It can either be inherited from a puppy’s parents or caused by a random mutation.

Complete, also known as heterochromia iridis, is present when a dog has one eye that is a different color from the other. This is the most common form of heterochromia and is often what you will see when you search for the condition online.

Many owners of dogs with this type of heterochromia are proud to show off their dog’s unique look on social media, and some even become famous due to this trait.

By comparison, sectoral and central heterochromia are quite different. Sectoral is present when only part of a dog’s iris is blue, with the rest of the eye being a different color.

In contrast, central heterochromia shows a spiked or haloed pattern in the iris instead and is equally as beautiful as both types.

Handy Hint: A few months after the eye color change, you will also notice changes in your puppy’s eating behavior.

So, there you have it; puppies’ eyes will start change color by the 5th week, finally ending on a permanent color by week 12.

Just like having a baby, introducing a brand-new puppy into the home can bring a lot of joy and wonder to a family.

With their round potbellies, squishy faces, and irresistible cuteness, there is no doubt that puppies are a delight to have around, especially if you have never owned one before.

It goes without saying that most people will probably be aware of all of these adorable features, particularly when they visit a friend’s house to meet this new puppy for the first time – commenting on how cute, clumsy or chunky they are.

However, what they might not notice at first glance is the color of the puppy’s eyes.

Now though, you might want to pay closer attention!

Now you know when puppy eyes change from blue to their permanent color, here are more things you can learn about your young dog.