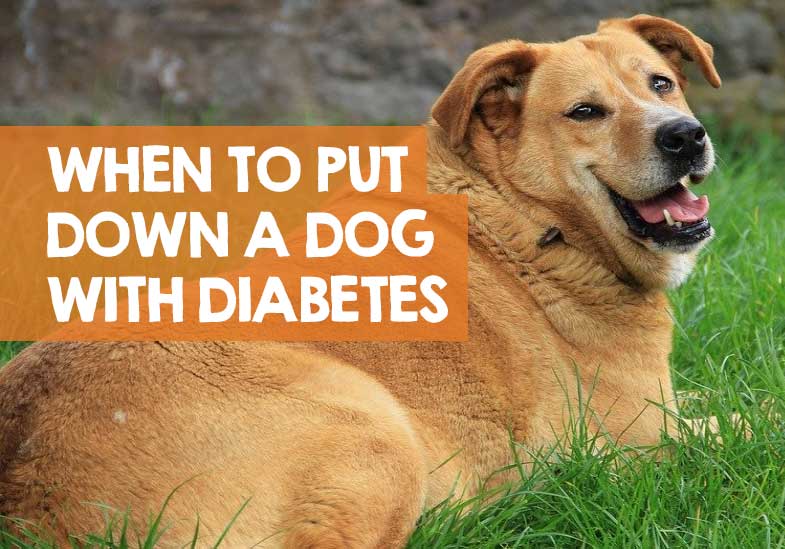 It can be really hard knowing your dog has a disease, especially if, like canine diabetes, it doesn’t have a cure. You will also have to consider when you might need to put your dog down, and what their life expectancy will be.

However, a common misconception about diabetes in dogs is that it is pretty much a death sentence, and that dogs should be put to sleep at the moment of diagnosis. This isn’t the case, as diabetes can be managed successfully a lot of the time.

When to put your dog down with diabetes? Unless your dog is very old or has other health complications related to their diagnosis, it might not be necessary to put them down. Consult with your vet about their life expectancy, any health issues, and outlook before making a decision.

The average lifespan of a dog with diabetes

What is the average lifespan of a dog with diabetes? If your dog lives past the first few months of being diagnosed, and aren’t left untreated, they can still have a lifespan of a further two year. Many won’t actually die of diabetes, but each dog will need to be assessed on a case by case basis.

In fact, many dogs with diabetes have completely normal lifespans and a high quality of life provided they have the correct treatment.

When my grandmother’s dog first got diagnosed with diabetes, it was a lot to take in, particularly as we also had to consider if it was kinder or not to put him to sleep in light of his diagnosis.

If you’re wondering whether or not the time is right to put your dog with diabetes to sleep, this article will give you a personal overview of canine diabetes, treatment options and what you might have to do in the future – all based on our family’s personal experience of my grandmother’s diabetic dog’s lifespan after diagnosis.

What is canine diabetes?

If a dog is diagnosed with canine diabetes, this means that their pancreas doesn’t produce an adequate amount of the hormone insulin (if at all). Alternatively, their body might not react to insulin in the correct way.

Usually, insulin works by absorbing glucose (sugar) into the bloodstream and then transporting it around all the cells in the body.

If there isn’t enough insulin in your dog’s body or it isn’t working in the right way, this means that there is no way of controlling the level of sugar in your dog’s blood, which can lead to a condition called hyperglycaemia (see the PetMD.com definition).

Hyperglycaemia can make dogs seriously ill after a while, especially if they’re in conjunction with other health issues like urine infections. Diabetic dogs are more prone to other health issues, and also have a 70% chance of going blind.

There are two types of canine diabetes: insulin-deficient diabetes and insulin-resistant diabetes.

If your dog has insulin-deficient diabetes (also known as type 1 diabetes), this means your dog is unable to produce enough or, indeed, any insulin at all.

This usually happens when the pancreas is damaged or unable to function properly.

This is a life-long condition, and means that your dog will need to depend on insulin treatments to ensure their body is managing sugar properly.

Insulin-deficient diabetes is the most common type of diabetes for dogs.

If your dog has insulin-resistant diabetes (also known as type 2 diabetes), this means that whilst your dog’s pancreas is still producing some insulin, it isn’t being processed by the body in the correct way.

It means glucose isn’t being absorbed the bloodstream or being transported to any of the correct cells, which then leaves the dog with high levels of glucose in the blood and hypoglycaemia.

Although this isn’t as common as type 1 diabetes, it can occur in overweight, older dogs. Furthermore, female dogs who are pregnant can also develop a temporary insulin resistance.

Symptoms of diabetes in dogs

Although diabetes may present itself differently depending on the dog, there are some common signs and symptoms you can look out for:

To diagnose your dog with diabetes, the vet will perform a blood and urine test to look for elevated levels of glucose, electrolyte imbalances and high liver enzymes.

Although there are no certain causes for canine diabetes, some factors make it more likely. These factors include:

However, even if none of these causes apply to your dog, you shouldn’t rule out diabetes if they exhibit some of the symptoms.

Specialised diet and exercise plans will be recommended with your vet as part of treatment in order to prevent sudden spikes or falls in glucose.

You will also be shown how to monitor your dog’s blood sugar. This will be done by urine tests or a pinprick blood test.

Your vet will also determine an insulin type and dose for you to treat your dog with at home – usually via injections. Most dogs require insulin injections twice a day, around twelve hours apart after eating.

Handy Hint: You should always make sure that your pet insurance policy cover diabetes, because no policies will pay out on a pre-existing condition.

When is it time to put a diabetic dog down?

However, if your dog has been diagnosed with quite an advanced stage of diabetes, the kindest thing to do may be to put them to sleep. But when is the right time to put a diabetic dog down?

Just talk with your vet…

You will be advised by your vet about the best course of action, but it is ultimately your choice. A lot of first-time owners, however, regret keeping their pet alive and suffering longer than they needed to.

It can be very hard to let go of your best friend, but you’ll need to consider whether they are living the best quality of life.

Diabetes in its advanced stages can lead to a plethora of other health issues including:

You should also bear in mind that treatment for diabetic dogs can be quite intense, and if your dog is approaching its senior years and is already fragile, you might wonder if prolonging their life is the best course of action.

Although canine diabetes doesn’t need to be life-threatening, the gravity of the disease shouldn’t be diminished.

Early diagnosis is key if you want to avoid putting your dog to sleep, but if your dog is already dealing with advanced diabetes, it is likely they have other underlying health issues that severely detriment their quality in life where, in which case, putting them to sleep might be the best course of action for them.

Disclaimer: I am not a vet. All of the advice in this article is based on personal family experience and discussions we had with the vet.

There are other articles on DoggySaurus.com on a similar topic you could be interested in:

link to When to Put Down a Dog with Cancer (Bone, Bladder, Prostate, Lung)

I empathize deeply with any dog owner who has to make a decision to euthanize their dog because of a lung cancer, bone, bladder, or prostate cancer diagnosis. Cancer is truly devastating for your dog...

Continue Reading
link to Can You Catch a Stomach Virus from a Dog?

With so much talk going on about viruses at the moment, you may have heard discussions about dogs and their viruses and the potential for sicknesses to jump between species. In fact, just the other...