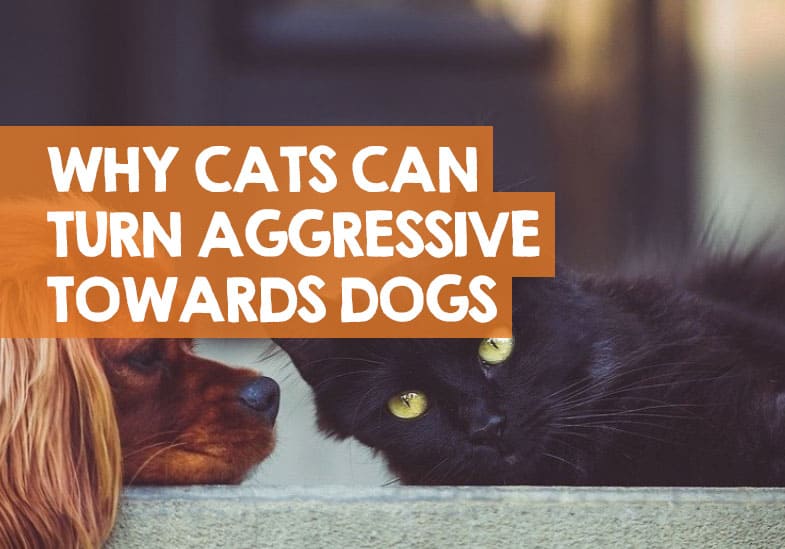 Cats and dogs: foes from the beginning of time. But what happens if your cat turns on your dog seemingly out of nowhere? And how do you get your cat to stop attacking the dog? In this guide, I am going to share with what I learned after going through this exact problem.

My cat attacks the dog unprovoked

We have a cat and a dog who live in relative harmony most of the time. However, we had a period last year when things changed. Poopie (our cat) suddenly started getting very aggressive toward Claude (our dog).

After speaking with my vet, he explained the following:

Why is my cat attacking my dog all of a sudden? There are many reasons why your cat may feel inclined to randomly attack your dog, with common reasons including feeling threatened, being territorial or having an underlying medical issue.

Half the time, your cat’s aggression might not even be anything to do with the dog!

Either way, pretty much all instances of cats’ aggression can be dealt with one way or another, so never feel that the problem is insurmountable.

To find out more about the causes and signs of cat aggression and why your cat is suddenly aggressive towards your dog then keep reading! There are also some tips on how you can curb aggressive feline behaviours.

What causes sudden aggression in cats (and how to stop it)

Although your cat’s sudden turn in behaviour may seem out of the blue, there are a plethora of underlying reasons which may well cause them to act the way they do.

How do I get my cat to stop attacking the dog

Here are the reasons, with some tips on what you can do to stop your cat attacking your dog.

If we consider the fact that cats genetically derive from the King of the Jungle (lions), their desire to ‘run the home’ as it were isn’t really that surprising after all. Cats often see themselves as in control, and if they perceive anything that may be threatening that control, their response is aggression.

This is why a cat can start attacking a dog all of a sudden, with hostility shown for example, they see you pay more attention to it that them.

They can be very sensitive to things that threaten their status as head of the home, which also explains their tendency to block doors and their anger at being moved.

Similar to status aggression is territorial aggression. This happens when a cat will see certain areas (like your home and back yard) as ‘their’ territory, and so if they feel as if an intruder (like your dog) is infringing on their territory, they will be more inclined to attack suddenly.

Again, this protectiveness over their territory can be linked back to their instincts, which they have inherited from their bigger, wild genetic cousins.

If you have recently introduced your dog into the home, your cat will probably start attacking them because they see them as infringing on their territory.

Furthermore, if there are other factors that make your cat feel insecure over their territory like redecorating, recently moving house or new cats roaming around the street, this could make them feel all the more protective over territorial infringements, meaning that your dog may feel the brunt of it.

Speaking of your dog bearing the brunt of loosely related scenarios, let’s look at redirected aggression. This is where external stimuli – such as an alarming noise/smell or other animals/birds running around outside – winds up your cat and builds up their aggression.

So, if your dog happens to cross their path when they’re in this state of pent-up rage, they are much more likely to be attacked. It’s a case of being in the wrong place at the wrong time.

Even if a threat doesn’t seem immediately evident, your cat can be suddenly aggressive towards your dog if they perceive them as a threat that they cannot escape.

Cats are generally very skittish animals, so it’s not hard for them to be threatened – although what that threat actually is can be a lot more unclear.

So, if you think about it, if a giant Golden Retriever bounds over to roughhouse with your cat, their fear and intimidation isn’t all that surprising.

This is probably the most serious kind of cat to dog aggression, but only due to its underlying cause.

If a cat has a medical issue that causes them to be in pain, such as arthritis, an infection or a recent operation, even those with previously calm temperaments have been known to lash out as a result of this pain.

Furthermore, if your cat has a neurological issue or another kind of cognitive decline, this can also cause seemingly random bouts of sudden aggression towards a dog.

Signs your cat is about to attack your dog unprovoked

Generally, a distressed or angered cat will display one or more of the following characteristics:

Needless to say, if your cat is exhibiting one or more of these behaviour patterns towards your dog, it is important to separate the two immediately to prevent any further injury or harm.

But, most of the time you don’t need to wait for these warning signals – aggression in cats towards dog are less random than you may think.

A good indication is their posture, which can help you identify warning signals and potential triggers for their behaviour. When cats are about to attack a dog, they will exhibit one of two types of posture: a defensive posture and offensive posture.

This is where the cat attempts to make themselves look smaller in an attempt to protect themselves from what they perceive as a threat. They’ll flatten their ears, crouch and tuck their tail under their body.

You might even notice raised hackles – which basically means hair standing up on the back of your cat.

They’ll also try to turn away from the perceived threat, or else hit or swat at it. If your cat is exhibiting this kind of posture, you can assume that their behaviour is fear-based.

This kind of posture is the opposite: designed to make the cat look intimidating. They will raise their ears and stiffen their tail rather than hide them, stiffen their legs, have raised hackles, stare at their target and growl/howl.

Either way, if your cat exhibits one of these postures that’s a clear warning sign before they suddenly and speedily attack the object of fear/aggression – in other words, your poor dog.

With their sharp teeth, claws and agility, cats can cause quite a lot of damage, so it’s important to be careful.

Although it’s natural for your cat to be apprehensive when a new dog enters the home, you might find that your cat starts spontaneously attacking your dog even though they weren’t all that bothered about them a few days ago.

It’s a worrying and stressful time for any pet-owner, as it can cause you to question the welfare of both your cat and your dog.

But hopefully, this guide has shown you how to identify not just when your cat is going to attack your dog, but why.

As I have said, whilst your cat attacking your dog may look sudden, if you learn to pay attention to the signs then maybe it isn’t so sudden after all.

There are many ways to deal with a cat’s aggression, including providing them toys with catnip to redirect their attention, setting up a ‘safe space’ for them in your home that the dog is not allowed to enter, minimising disruption and separating the cat and the dog at the first sign of hostility.

If you’re in any doubt about your cat’s sudden personality change or none of the other solutions work, you should take them to the vet to assess the situation.

Although it can be difficult to accept, it might just be the case that your cat and dog just don’t get along. But that doesn’t mean they can’t peacefully coexist.