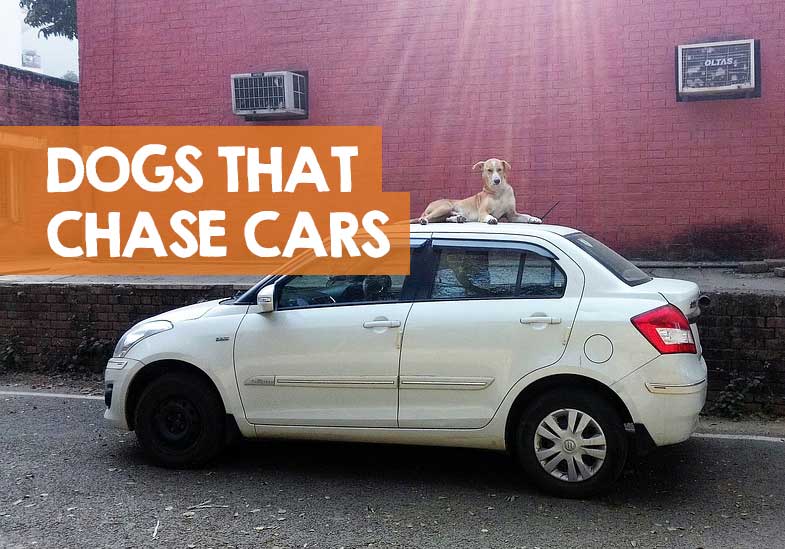 My dog is usually very placid, but over the last month he’s developed a slightly worrying habit of chasing cars. It’s happened all of a sudden; he does it at night, when I leave the house in my own car, and when we’re on walks.

Having spoken with our vet and animal behaviorists, I managed to stop him chasing cars. Here’s why your dog likes to chase cars, and how you can stop your dog doing it too.

Why do dogs chase cars? Reasons why your dog is chasing cars all of a sudden include boredom, fear, loneliness. It can also be an instinctive trait and your dog can’t help but do it. By understanding why they car chase, you can stop your dog before he gets hurt.

Why does my dog chase cars all of a sudden?

If your dog chases cars, you may be asking yourself why? How do I get him to stop? Below are the ways we did it, because my dog was putting himself into a lot of danger. But first, let’s get into the reasons more in depth.

The thrill of the chase

A rancher who worked his whole life with cattle dogs once told me, “a dog does as a dog is.” We can dress our dogs in cute clothes and teach them tricks, but at the end of the day, a dog is what he is – a dog.

He cannot deny the instincts hardwired deep in his brain any more than the sun can deny rising in the east. It is up to us humans to understand and guide our dogs. Here are what a dog’s instincts tell him about chasing cars:

“If it runs from you, it must be prey”

All dogs are carnivores. Wild dogs work in coordinated teams to “harry,” or chase down their food. Hunting and sporting dogs in particular are bred for this “prey drive,” and this makes them some of the hardest breeds to correct when they start chasing cars.

“It’s huge and growling and it’s going to EAT ME!”

Some dogs are terrified of cars, but instead of running away, they attack it in an attempt to drive it off. This is the mindset of guard-dog breeds like Rottweilers, Dobermans and German Shepherds.

Once a dog establishes his territory, he’ll want to protect it from anything that doesn’t belong there, regardless of who or what it is.

Loyalty is the hallmark quality that endears us to our dogs. Some dogs can become anxious if their human pack leaders go off and leave them behind, so they may chase after your car in the hopes that you will take them with you.

Your dog is bored, but chasing cars is super fun! There is nothing more thrilling to your pooch than when his legs are moving, and the wind is whipping through his fur. Running alongside a car may give him the thrill of running with a pack.

Once you discover why your dog chases cars, you can then work to correct his behavior.

Not all training methods are effective on all dogs. Sometimes a mix of techniques works best. Experiment with some of the methods below to find out which one works best for your pup.

How do I get my dog to stop reacting to cars?

The best you can stop your dog from chasing to cars is by using positive reinforcement. This is always the best way to get results from your dog.

However, the instinct to chase is so strong that once his legs are moving his brain zeroes in on his target and blocks out absolutely everything else – including the car coming in from the opposite direction.

Verbal or physical correction is necessary to snap him out of it.

I used this same way to stop my dog from chasing cars.

If my dog started chasing and would not come back when I called, calmly walk up to him, attached the leash, and make him walk back with me.

I said nothing to him, but I did not let him run ahead.  He needed to learn that I was the leader of the pack and should be respected. Once home, I made him go to his crate for a “time out.”

Not being allowed to interact freely with his family is the worst punishment in the world! He soon realized that if I had to go get him, he was in major trouble.

This training took a lot of time and patience, but it paid off. The next time my dog chased a car suddenly again, I walked out, leashed him and walked him right to the crate again. No scolding whatsoever. My dog stopped chasing cars soon after this.

A long leash will also work. Let the line remain slack, and when your dog wanders close to your boundary line, correct him, call him back and reward him for a good come.

Repeat this training until he avoids the boundary line on his own.

There are additional things you can do too to stop your dog chasing cars such as.

Give your dog something better to chase

If your dog thinks chasing cars is fun, teach him to chase something else instead. Fetch is a great game. Alternately, setting up a mini agility course in your back yard or going on a brisk jog will satisfy his need to run.

Desensitize your dog to cars

If your dog chases your car as you leave, take the time to show him you are not going to leave him forever. Put him out on lead or have a friend or family member hold him on leash where he can see you while you drive away in your car.

Then come back. If you’re dog remains calm, get out and praise him.

If he is excited, leave again and come right back. Repeat this until he gives up and simply watches you go. If, after weeks of this training, your dog still over-reacts, he may have a chronic anxiety disorder. Talk to a vet or a professional trainer if this is the case.

When correcting your dog’s behavior, timing is everything. Watch his body language. When he sees or hears a car to chase, his ears will perk up or he will start to pace or get excited. If his body goes stiff with his tail straight up and rigid, he is a split second away from bolting.

Immediately recall your dog and make him stay next to you as the car passes.

Some dogs are very subtle with their body language. Be sure they wear a collar and lead so you can grab them at once. Use a flat collar. Choke collars will injure your dog if they lunge too hard against them.

An anti-pull harness may work if your dog cannot slip out of it. Personally, I do not recommend a regular harness for large breeds as harnesses allow your dog to put all their weight and power against you.

An invisible fence is a good option so long as you teach your dog to respect the fence’s boundary markers. If you rely on the dog to figure out the fence on his own, he’ll figure out how to get around it and you’ve just wasted a whole lot of money.

Living in a rural area, people rarely put their dogs on the leash. There is always at least one dog posted at the end of their driveway, waiting for a car to come by.

One of my neighbors likes to sit on his porch and watch the dog race madly alongside cars (on his side of the fence) as they zipped down the road.

We may joke about it, but I have heard of dogs getting injured and even killed when chasing cars. This is why my heart skips a beat every time my parents’ Jack Russel Terrier runs along the side of a twelve-ton dump truck.