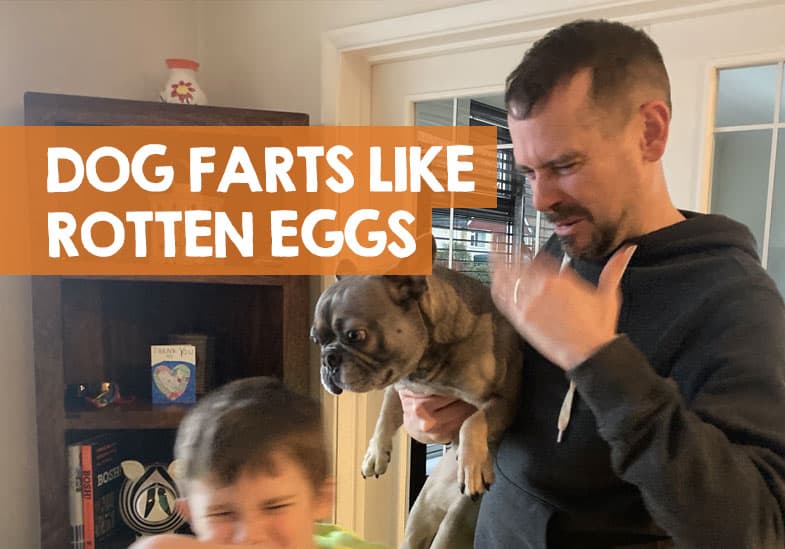 I guess we’ve all had those times when the dog let’s out a really rotten egg fart. They always seem to time it well too. Such as the time you were trying to impress your new in-laws, a dinner date, or you got woken up in the middle of night wondering if the sewer was overflowing again.

Jokes aside though, dogs who have farts like rotten eggs or sulfur could be an indication your pet is suffering with some gastrointestinal issues. Farting is a natural process, for both humans and our dogs (and every other living creature).

But when does canine flatulence go beyond the acceptable norm when it reaches sulfur and rotten egg like levels of stink?

Plus, there are also certain diseases and gastrointestinal issues can also be the reason your dog’s fart smells sulfuric.

However, most times, when your dog lets off a sulfuric smelling eggy stink bomb it will due to something he’s eaten.

But excessively rotten egg smelling farts can also be a sign of an underlying health condition. Let’s talk through the different reasons your dog’s farts smell like rotten eggs and when you should worry about it.

The causes of sulfur smelling farts are quite simple to understand, as it’s all down to what causes gas in your dog. By having an understanding of what causes flatulence in the first place, the mystery of rotten egg farts can be solved.

Your dog’s gastrointestinal (GI) tract is host to a population of bacteria, viruses, fungi and other microbes. This group is referred to as the intestinal microbiota. And, yes, us humans also have this little community thriving inside us!

The intestinal microbiota community plays a very important role in the digestion of our food as well as its fermentation. It’s the bacteria in the large intestine that’s responsible for producing certain gases.

During fermentation of fiber and complex carbohydrates, the following gases are produced:

Sounds like a whole science lab experiment going on inside your dog’s stomach!

What I can tell you though, a certain amount of gas production is normal. The problem comes in when the gas production becomes excessive or stinky like rotten eggs.

Is excessive flatulence bad for my dog?

Excessive canine flatulence can be an indication something is not right with your dog. Most times it happens when you switch your dog from one food to another.

It can also happen if your dog has been in the trash can and has eaten something that doesn’t agree with him. Your dog could also be suffering from a certain food intolerance.

Your dog’s digestive enzymes are not able to cope with the breaking down of certain fibers and complex carbohydrates.

When this happens, the bacteria are not able to digest and ferment the nutrients as efficiently. This results in larger amounts of gas building up which can then result in dog farts that smell like sulfur.

Excessive farting is often linked to a dietary issue and can be solved fairly quickly.

However, if you’re struggling to pinpoint the cause, it’s a good idea to speak to your vet. Your dog may have a food allergy, an inflammatory bowel disease or infection, or some other underlying GI condition.

Why are my dog’s fart smelling like sulfur and rotten eggs then?

The five gases I’ve mentioned above normally produce relatively odorless farts. They make up 99% of the farts released by your dog and most times, unless excessive, they’re normal.

It’s the rotten egg stinky ones that really get our attention and gets us thinking there may be something up with our dogs. Even your dog may be puzzled by the smell and I’ve seen dogs actually lift their tails and have a good sniff themselves.

The culprit of these rotten egg or sulfuric smelling farts is the one gas known as hydrogen sulfide. This gas is a result of the digestion process in your dog’s colon.

When do I need to worry about my dog’s smelly farts?

I’ve mentioned that certain foods and diets may make your dog fart more often. A diet high in red meats, eggs and other proteins sources such as beans will result in stinky, sulfuric farts.

If your dog’s food contains any of these sulfur-rich ingredients, you may need to change his food.

However, if the sulfur fart stink continues and you’re walking around with your nose pinched all the time, then you’ve got to investigate the matter further.

Rotten egg smelling farts accompanied by bad-smelling, sour feces or diarrhea is another reason you should take your dog to the vet as soon as possible.

Your dog could be suffering from any of the following conditions:

You need to take your pooch to the vet so he can perform a full examination. If these conditions are ruled out, then your vet may recommend checking for certain food allergies or food intolerance.

Is my dog in pain with excessive or stinky farts?

Have you ever watched a human baby suffer from colic? They scream blue murder and often their bodies contort in pain from cramps and gas.

If your dog is suffering from excessive gas or has those really bad smelling farts, his GI tract is taking strain.  Most often, he’s also going to experience tummy cramps and general discomfort.

Most times, dogs don’t show when they’re in pain, so you might not notice he’s struggling with cramps. If you suddenly notice a change in his demeanor such as a loss of appetite, diarrhea and lethargy, together with stinky farts, then take him to your vet.

What can I do to stop my dog’s stinky farts?

If your vet has ruled out any underlying health conditions, then you can assume your dog’s diet is the cause of his bad-smelling rotten egg farts. Here are some ways you can help your dog limit his stinky sulfur emissions (and clear the air around home).

Maybe the kibble you’re feeding your dog is too rich in protein and other sulfur-inducing ingredients. You could try switching him to a new diet. Make sure you do this slowly by introducing the new food in small quantities while phasing out the old food gradually.

If you change your dog’s diet immediately, his digestive system may rebel and lead to excessive farting. Let him acclimatize to the new food slowly, over a few days.

Dogs are always on the look-out for anything that smells bad and tastes good. This means they’ll go scavenging in the trash bin, jumping up at tables, the compost heap in the garden and even picking up the dead birds laying in the park.

Stop your dog from scavenging and eating unsavory items. This will keep his GI tract in a much healthier state and reduce the stinky farts.

It’s always tempting to share your food with your dog, especially when he’s looking at you (well, begging) with such woeful eyes. However, your dog’s digestive system is a delicate one and giving him tidbits from the table is asking for trouble.

Avoid feeding your dog from the table and make sure he only eats his own food. This way you’ll be eliminating any chance of another sulfuric explosion.

Any dog owner will have smelled those rotten eggs farts before. Now and again, it’s a laugh and probably nothing to worry about. However, if it is a constant stream of sulfur smelling farts, you should seek some professional advice if the tips above don’t help.