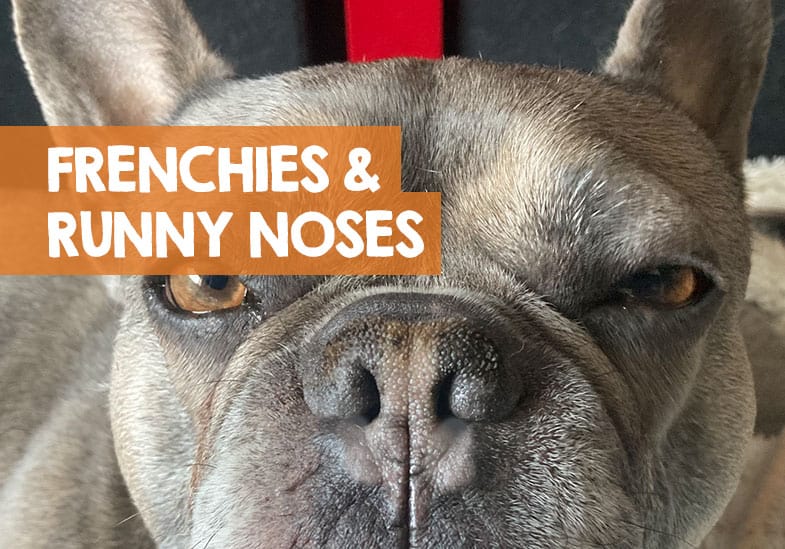 However, this isn’t always the case. Yes, French Bulldogs can get congested with cold and suffer with sinus infections, but a runny nose doesn’t always mean something bad. Whilst it is true that the generations of breeding have made French Bulldogs’ nasal passages less than ideal, don’t be panicked by a runny nose… and here’s why:

Do French Bulldogs have runny noses?

Why does my French Bulldog have a runny nose? French Bulldogs do have runny noses, and it’s normal for a small amount of clear snot to be coming from their nose most of the time. Because French Bulldog noses are short and flat, things like snot are a lot more visible compared to other dog breeds.

When it comes to your French Bulldog’s runny nose, it is important to establish what is normal for them, as every individual animal has a slightly different definition of normal. If your French Bulldog is producing a noticeably larger amount of snot than before, or it changes colour to yellow or green, you should take stock of those abnormalities and take them to see a vet.

Please note: I am not a vet, but I am a Frenchie owner with experience of seeing this. The notes on this website are based on my own experience, talking to my vet, and my own research. If in doubt, you should always seek a professional opinion from your vet.

Can French Bulldogs get sinus infections?

French Bulldogs can get sinus infections more than other breeds due to the way in which their nasal passages and skulls are formed.

The unique look of French Bulldogs has been bred extensively down the years but does mean they can suffer with breathing issues and nasal / sinus infections more than other breeds might.

The causes and treatments for French Bulldog runny noses

The medical term for runny noses in dogs is nasal discharge, and this refers not just to snot, but also blood, fluid and anything else that comes out of your French Bulldog’s nose.

This makes it important that you distinguish between the different reasons why your French Bulldog may have a runny nose, with some of the most common reasons being listed below.

Just like humans, French Bulldogs can suffer from allergies too. It is one of the most common reasons behind an abnormally runny nose.

French Bulldogs can be allergic to all kinds of things, with some examples including pollen, chemicals, food (here’s what they should not be eating) and even our shed human skin (called dander)! But this list is far from exhaustive.

If a French Bulldog is suffering from allergies, they may display some of the following symptoms:

If your vet suspects your French Bulldog has an allergy, they will perform an allergy test in order to confirm it. Once the allergy is confirmed, you will be able to reduce allergic reactions by avoiding the allergy trigger altogether.

If the nasal discharge is just coming from one nostril, this could mean that there is a foreign object (like a piece of grit or a blade of grass) partly blocking your French Bulldog’s nasal passage.

However, if your French Bulldog is fidgety or the cause of the blockage isn’t immediately visible, it is probably best to take them to the vets. The inside of the nose is incredibly sensitive, so even a small cut could lead to a lot of bleeding.

If you take your French Bulldog to the vets, they’ll be sedated, have the source of the blockage removed and be prescribed antibiotics to avoid infection.

Some French Bulldogs have excessive nasal discharge as a result of growths in their nose. Nasal polyps are the medical term for overgrown mucus-producing glands, whilst nasal tumours, which present similar symptoms, can be benign or cancerous.

If you suspect your French Bulldog has growths in the nose, look out for the following symptoms:

Of course, if you see any kind of growth on your French Bulldog, it is paramount that you take them to the vets to be assessed.

Polyps and benign nasal tumours are often treated with surgery. Given the fact that polyps tend to reappear, your French Bulldog may need multiple bouts of surgery.

French Bulldogs can also catch infections. This may be from other animals or from coming into contact with something unsavoury outside. They can catch bacterial, fungal or viral infections.

Although symptoms may vary based on the type of infection, some of the most common symptoms of an infection in your French Bulldog include:

If your French Bulldog ends up having frequent infections (which is often the result of a poor immune system, a lack of vaccinations or an underlying illness), your vet may decide that the best course of action is an operation.

Although your French Bulldog may experience breathing complications due to their short, flat noses, their noses oftentimes work just as well as any other dog breed, so it’s important not to panic if you see them experiencing nasal discharge.

However, it is also important to trust your judgement if you think something is not right about the nasal discharge or runny nose – and call your own vet.

It may be a different consistency, amount or colour than you’re used to or be one of many unusual symptoms your French Bulldog is experiencing at that time.

It’s better to be safe than sorry, so if you aren’t fully confident about the cause of your French Bulldog’s runny nose it is important to take them to the vets. With their help, your French Bulldog will be back to their old selves in no time!

If you are a French Bulldog owner then here are a few other things to look out for in your pup: