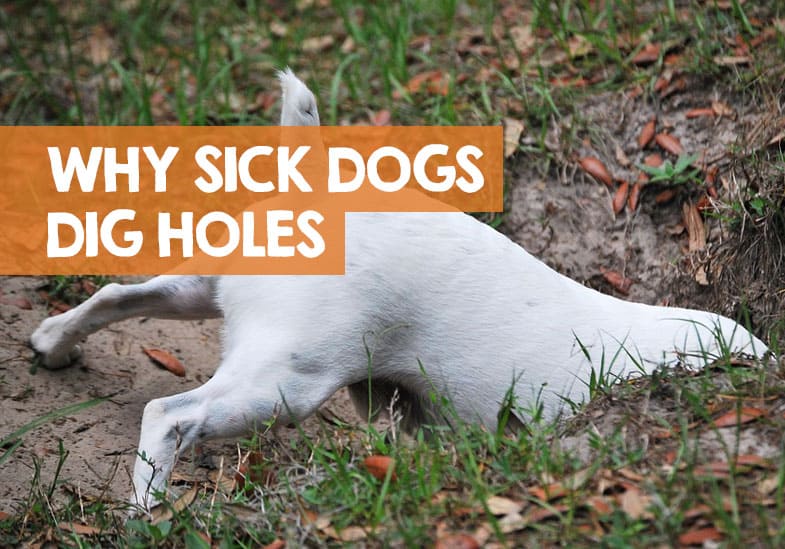 This is a weird one, but I saw my dog do it recently. He was sick and started to dig a hole, then lay down in it. Thankfully he recovered from the GI problem and was lot better after 24 hours, but my curious mind wanted to know why my dog exhibited this strange behavior. Here’s why…

There are several theories on why dogs dig holes when sick. These vary from sick dogs wanting to dig holes to hide from predators since illness makes them an easy target. It’s an instinctive thing passed down the generations. Another reason is they want to be alone, it’s a way of coping with sickness-related stress.

Keep reading as I share everything you need to know about this digging behavior in sick dogs, including ways to curb it. By the end of this piece, you’ll never wonder why your sick furry friend digs holes again.

5 reasons why your dog digs holes when sick

When dogs are unwell, they often exhibit weird behaviors that leave us both worried and confused. And since they, unfortunately, don’t have the luxury of telling us why they do some things, we are only left to make guesses.

It’s a well-known fact among dog parents that our dogs dig holes when they aren’t feeling their best. So, if this is something you usually observe each time your dog is unwell, you’re not alone.

Your furry pal’s digging tendencies whenever they’re sick may seem scary — especially if you have little or no idea why they do this.

It becomes even scarier if all that goes through your mind when you watch them digging is the age-old myth that when sick dogs dig holes, they’re basically digging their own grave.

That’s not it though.

Your dog isn’t digging a hole when sick to show you where they want to be buried should things go wrong. There’s no real evidence proving that dog digging is a grave-preparation mission.

With that in mind, let’s look at five real reasons why your dog likes to dig holes and lay in them when sick:

1. They are in “danger” and want to hide for safety’s sake

It’s part of a dog’s natural instincts to want to keep himself safe.

Before dogs’ domestication started, sick wolves in the wild would dig holes to get away from potential wild predators. Several years later, domesticated dogs still have this inherited survival instinct from their ancestors (wolves).

When your dog is sick, he can feel how weak his body is. And his instincts tell him this weakness will only make him vulnerable to predators.

Your dog doesn’t seem to understand that they have a loving, predator-free home and are completely safe from danger because you’re there to protect them. It’s like this thought never crosses their mind when sickness strikes.

Your dog probably thinks he is on his own and thus needs to exercise the unspoken rule of survival in the wild — “hide or get hunted”. That if he doesn’t take cover at his most vulnerable moment, an enemy will find him, and he won’t be able to fight him off.

So yes, your dog has imaginary attackers he wants to get away from when sick, hence the hole-digging habit.

2. They prefer some time alone

Your four-legged friend loves being around you, no doubt. But when they aren’t feeling okay, they might crave solitude.

If your sick dog is digging a hole, there’s a good chance they want to briefly get away from the world around them.

Hiding inside a hard-to-find spot like a hole may give them comfort. It’s their preference during this emotionally-draining time — not wanting to be around anyone or anything.

3. Hole digging as a stress reliever

Dealing with sickness is often a tough time for our canine friends.

When your dog is unwell, they’re scared because their body feels strange. Nothing like what they’re used to. Illness puts your dog’s mind in an anxious state.

Most dogs engage in destructive deeds when stressed. Digging is one of these destructive tendencies.

Think of hole-digging as your dog’s coping skill when illness-related stress kicks in. It’s an outlet to release the anxious thoughts they may be having about their bodily discomforts.

4. They want to cool down if they’re feeling feverish

Dogs normally experience various symptoms when sick, including fever. If you’ve ever been down with a fever, you know how uncomfortable excess body heat having can be.

A dog’s experience with fever is also quite distressing.

When your four-legged is ill and has fever as a symptom, they’ll want to find an extra-cool resting spot out of the sun. They are smart enough to know that a bit of digging here and there can help them find the much-needed body relief.

They will dig and lie on the cool, upturned soil.

5. Just in case they throw up

Sometimes, dogs like a little privacy when they are unwell and feel like puking. Your dog probably doesn’t want to throw up at a place (like inside the house) where they won’t be able to hide evidence of their vomit.

So, when digging a hole if sick, they’re likely creating a spot where they can throw up secretly and cover it up.

Also, remember that our canine friends don’t like to make a mess in places where they spend most of their time. If your sick furry friend loves to rest in his comfy crate, he will want to keep this space clean — without any traces of vomit.

What you can do to curb the digging behavior

One thing you need to keep in mind is that your sick dog digs holes instinctively. Since it mostly comes naturally to them, it can be quite hard to stop them from doing it completely.

If the destruction isn’t alarming, you can let them be. Digging is probably what makes them feel at ease amidst the sickness.

But if they are leaving deep holes all over your compound, there are a few steps you can take to make the destruction less of a nightmare:

What does it mean when your dog is digging a hole?

There are various reasons why your dog may be digging a hole. Sickness is one of them.

If your dog is digging a hole when they feel sick, it means they want to hide to avoid getting attacked when in that weak state. It could also mean they want to have some time alone, or that digging is their way of coping with sickness-triggered stress.

Do dogs dig before they throw up?

Some dogs prefer to vomit in secret. They may dig a hole where they can throw up and cover the vomit afterwards. They can also eat grass first to make them vomit more.

Why is my dog digging holes and not eating?

It’s an indication that your dog is sick.

As discussed earlier, dogs usually dig holes when they are unwell for different reasons, including the following: It’s their way of coping with the sickness-triggered stress, they want to hide because they feel too weak to fight off potential attackers, they want to cool down if they are experiencing symptoms like fever, or because they want some alone time.

If your dog is digging holes when sick, show compassion and understanding.

Scold them, and they will become more anxious during this stressful time, and could dig more and deeper holes during sickness.