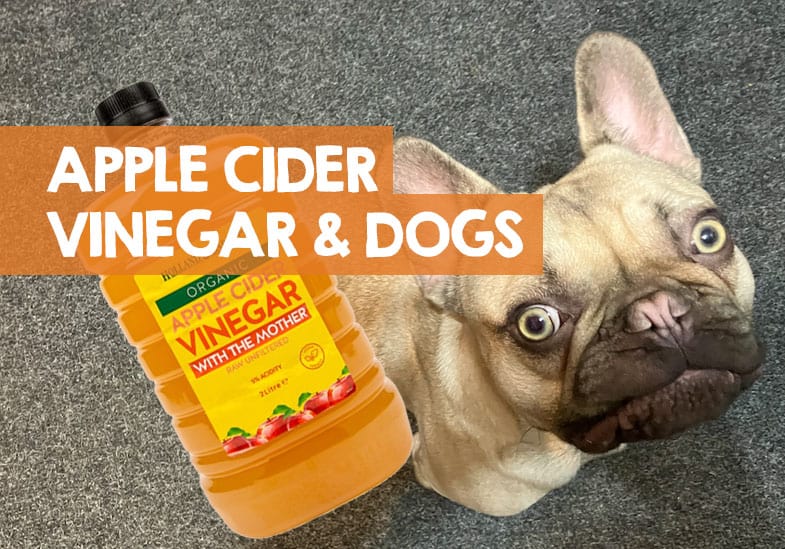 It’s very normal for dogs to lick their paws. But when your dog’s licking goes overboard, you need to break the habit as it can be bad for them. The good news is there’s a home remedy treatment that easily available and simple to use, apple cider vinegar.

That’s right, you might find the solution to your dog’s excessive paw licking in your cupboard. Because yes, apple cider vinegar does stop a dog from licking paws. But you need to know how to use it properly.

I’ve put together this handy guide on apple cider vinegar as a natural remedy for dogs that persistently lick their paws. It includes what makes ACV effective, how to use it on your dog’s paws (and how often to soak), and what to consider before using it.

Here’s all you need to know, and lower down the page it explains how you use it on your dog. If you don’t have any, you can buy it on Amazon.

Apple cider vinegar to stop dogs licking paws gets the stamp of approval for persistent foot lickers. Here’s what makes this natural solution quite effective:

1. It has antibacterial and anti-fungal qualities

Apple cider vinegar is pretty much a bacteria or yeast-fighting formula. Its main ingredient (acetic acid) destroys bacteria and yeast.

If your dog has bacterial or yeast overgrowth on their paws, they will be super itchy and want to lick their paws every other time. Applying apple cider vinegar will help kill the bacteria or yeast and leave your dog itch-free.

ACV has natural compounds called flavonoids, which are known to have anti-inflammatory qualities. If your dog’s itchy spots on the paws are painful, apple cider vinegar will soothe these spots and offer much-needed pain relief.

When these annoying creatures are gone, your dog won’t feel the need to constantly lick their paws. Also, most dogs don’t like the smell of ACV. If your dog gets a whiff of it on their paws, they will likely avoid licking the area.

Before you use apple cider vinegar on your dog’s paws

Before you begin using ACV to curb your dog’s excessive paw-licking behavior, there are three things you need to keep in mind.

The type of apple cider vinegar to use

If you want your dog’s paws to reap all the benefits that ACV offers, purchase the organic type.

Organic apple cider vinegar often has labels like “organic,” “the mother,” “raw,” or “unfiltered” on the bottle. If you click the image below it will take you to a recommendation on Amazon.

When it comes to AVC, the cloudier the appearance, the better. That’s what the organic version looks like. Organic ACV has all the natural, beneficial enzymes that will resolve your dog’s persistent paw-licking problem.

Dilute the product before use

Undiluted apple cider vinegar will be quite harsh on your dog’s paws. Its highly acidic PH (because of the acetic acid) will irritate your dog’s paws and may even cause mild burns.

So, don’t drizzle apple cider vinegar straight from the bottle onto your dog’s paws. Dilute it first. The generally recommended ratio is 2: 1. That is, mix two parts of water with 1 part of ACV.

Never use ACV on broken skin

If your dog’s paws have open sores, rashes, or a cut, do not apply ACV, as they will experience a burning sensation.

For this reason, you should always inspect their paws before applying this magical solution. If you notice any wounds or cuts, avoid ACV. Instead, speak to your vet for guidance.

How to use apple cider vinegar on your dog’s paws

Using ACV on your dog’s paws is simple. And for the best outcomes, consider applying it daily for at least a week as you monitor whether your dog’s paw-licking habit is slowly getting under control.

Here are three different ways to go about this:

Mix the diluted apple cider vinegar in a spray bottle and spray generously on your dog’s paws (don’t forget to spray it between their toes).

You don’t have to rinse their paws afterwards since the smell will fade away as the apple cider vinegar dries up. Plus, the mild ACV scent left behind will act as a repellant.

And because it’s diluted, you don’t have to worry if your dog licks their paws. Diluted ACV won’t cause any harm when licked.

Be careful not to spray the mixture into your dog’s eyes.

2. Use a cotton ball

Soak a medium-sized cotton ball into a bowl with the diluted apple cider vinegar and dab it gently all over your dog’s paws for a few minutes (about five minutes).

Ensure every paw is covered with a generous amount of ACV. No need to rinse it off.

In this case, add the diluted ACV into a spacious container. Dip your dog’s paws in the solution — one paw at a time for about five minutes.

The best thing about this soak is that it will drown any bugs or pollen hiding on the paws that make your dog lick a lot.

You could also buy paw socks from Amazon to then put over your dog’s feet as an extra barrier to licking.

4. Pay attention to how your dog reacts when you apply the ACV

If you realize your dog is whimpering or withdrawing their paw every time, discontinue the process. It could be they have a tiny cut on the paws that you hadn’t noticed, and the ACV’s burning sensation is making them uncomfortable.

5. Monitor your dog for any improvement

If you notice nothing has changed several days later (your dog is still licking their paws as excessively as they were before you began using ACV), take them to the vet.

They may be having an underlying condition manifesting in form of persistent paw licking. Your vet will determine whether there’s a health problem triggering the excessive licking and offer professional treatment.

Can I put apple cider vinegar directly on my dog?

No, you cannot put apple vinegar cider directly on your dog. It should always be diluted to a 50/50 ratio with water.

How often do I soak my dog’s paws in apple cider vinegar?

When your dog is excessively licking, you could soak his paws daily for the first week. After that perhaps just twice a week once you see an improvement in the behavior.

Why your dog is licking their paws

If you’re beloved dog constantly licks their paws like it’s their favorite pastime, this habit can be both annoying and a cause for concern.

There’s no fun in listening to the weird sounds dogs make when engaging in their paw-licking spree. And like most dog parents in a similar situation as you, you may wonder why your dog just can’t seem to keep their tongue off their paws.

Well, your dog’s excessive paw-licking habit could be triggered by many things.

They may be trying to relieve an itch on the paws caused by a minor injury, a bacterial infection, or a yeast infection. Or they’re constantly licking to get rid of irritants like pollen or fleas stuck on their paws.

The trigger could also be something as ordinary as boredom or the simple fact that licking their paws makes them feel good. In serious cases, excessive paw licking may be a symptom of an underlying medical issue or behavioral problem.

For most of these triggers, apple cider vinegar often made from fermented apples, can be of great help. There’s more to this popular, inexpensive household ingredient than just spicing up salad dressings.

Apple cider vinegar is one of those gifts from nature known to solve several dog problems thanks to its amazing properties.

Are there any alternatives to apple cider vinegar for dogs?

Yes, there are apple cider vinegar alternatives. These include home remedies such as diluted lavender oil, raw honey, coconut oil, or baking soda paste, and using green tea to make a paw soak on their feet.

Can I put apple cider vinegar on my dog’s paws?

The short answer is, yes, you can. But you must dilute the ACV with water before applying it to your dog’s paws. You should also ensure your dog has no open wounds or cuts before covering their paws with ACV.

What can I give my dog to stop licking his paws?

Applying diluted apple cider vinegar to your dog’s paws can do wonders. But make sure your dog doesn’t have broken skin on the paws before using the diluted ACV.

What happens if a dog licks apple cider vinegar?

Apple cider vinegar is non-toxic (and edible) for dogs. If a dog licks a small amount of diluted ACV, nothing will happen.

But if they lick raw ACV, they will likely experience minor irritation due to its acidic content.