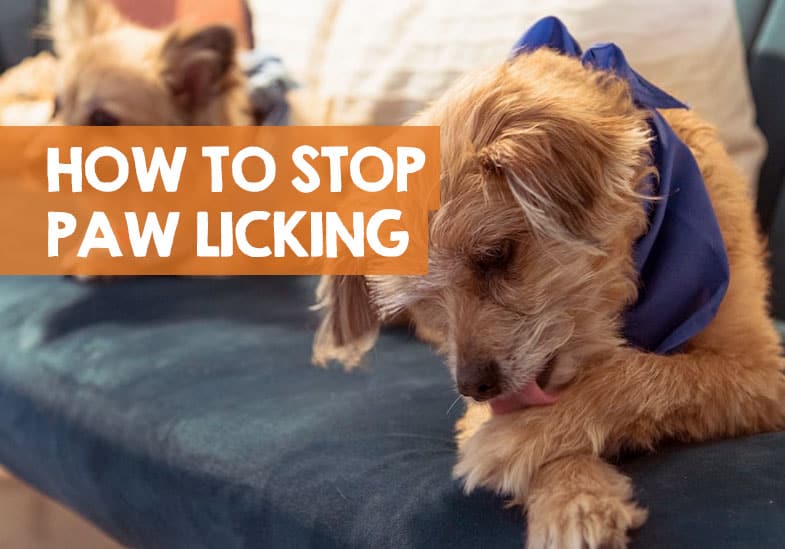 Excessive paw licking is bad for dogs as it can lead to a build-up of bacterial or yeast infections in between their toes. But excessive paw licking does also point to there being a problem (more about that later). So just what can you put on dog’s paws to stop licking?

If you scroll down, you will see a list of home remedies for dogs licking paws, including instructions on how to apply it properly. Firstly though, here’s the short answer on how to stop the paw licking

Things you can put on a dog’s paws to stop licking including home remedies such as apple cider vinegar, diluted lavender oil, raw honey, coconut oil, or baking soda paste, and using green tea to make a paw soak on their feet. Paw socks also work very well too.

While these home remedies to stop your dog licking his paws are widely recommended by experts, it’s often advisable to speak to your vet first. When you use any form of home remedy there’s a risk it could lead to an allergic reaction in your dog.

It’s also worth mentioning that if the paw licking is accompanied by symptoms like appetite loss, blisters, deep rashes, burns on the paws, a complete change in mood, or any other worrisome sign, call a vet.

Also, if the excessive paw licking persists several days after using your preferred remedy, please take your dog for a vet check-up.

Aside from home remedies, I have found that dog socks to stop them paw licking work better than anything. You can buy them on Amazon.

That said, here are seven solutions you can try to tackle your dog’s excessive paw licking habit:

The most popular home remedy is apple cider vinegar. It can stop a dog licking paws very effectively. It’s an ordinary household item will save your dog’s paws from the irritation nightmare – it’s on Amazon if you don’t have any.

Organic apple cider vinegar is a powerful anti-fungal and anti-bacterial solution that can clear yeast and bacteria on your dog’s paws.

But it must be diluted. Its acidic content, when raw, will burn your dog’s paws.

You can use the generally recommended ratio of 1:2. Put simply, if you’re using one cup of AVC, mix it with two cups of fresh water.

There are two ways to use this diluted vinegar solution:

Before using diluted vinegar, check your dog’s paws to ensure they don’t have any wound.

Another home remedy to put on a dog’s paws to stop the licking is lavender essential oil. It must be heavily diluted though and can then be used topically on dogs dealing with paw irritation. As before, you can buy it on Amazon.

It has anti-itch and anti-bacterial properties, so it can soothe any itchiness on the paws and fight off bacteria. Dilutedlavender oil also a great insect repellent.

Plus, this essential oil promotes a calming effect on dogs. So if your dog pal usually licks their paws out of anxiety, diluted lavender oil will help them relax.

Consult your vet forts on how to dilute this essential oil before dabbing it on your dog’s paws. Also, ensure they don’t have open wounds before applying the diluted lavender oil.

Your dog may try to lick off the lavender, which can make them sick. To avoid this, consider getting them protective booties or an E-collar which they can wear for a short while after applying the essential oil.

Baking soda is another home remedy you can use on dog’s paws to stop the licking. It acts as a fast-acting paw itch reliever, thanks to its anti-inflammatory properties.

It will also soften your dog’s paws if they are dry and provide a soothing relief if they’ve been stung by an insect.

You only need to mix the baking soda with water to form a paste. If in doubt, seek your vet’s opinion on how much baking soda to use.

Apply the paste to your dog’s paws, then wait a few minutes before rinsing it off.

We know honey as one of nature’s most effective remedies when it comes to skin problems. Applying raw honey to your dog’s paws will ease itchiness and heal any minor cut triggering the obsessive paw licking.

You can loosely tie a bandage on the paws to ensure the honey has enough time to do its work without your dog licking all of it.

And remember to wipe the honey after a while. That way, your dog won’t have to deal with the honey’s uncomfortable stickiness.

Coconut oil is an excellent skin healer. Its anti-bacterial, anti-inflammatory, and anti-fungal properties will fight infections and any other skin discomfort on your dog’s paws responsible for the excessive licking.

It also works well as a moisturizer if your dog’s dry paws are causing the licking.

But stick to natural coconut oil for the best outcome. Avoid inorganic or refined coconut oil. Once you apply it on the paws, let it soak in for a few minutes, then wipe off the excess oil.

6. Paw soak with green tea and some ingredients above

Yes, the green tea in your pantry.

To make an effective paw soak, brew the great tea first. Then, let it cool down before adding the other ingredients — coconut oil, lavender oil, and apple cider vinegar — as shown in this video.

Paw balms contain a mixture of different organic oils with paw healing and soothing properties. But before purchasing one, seek your vet’s opinion on the best brand.

Why your dog is licking his paws?

We’ve all seen our canine friends spend their sweet time licking their paws.

It’s a normal part of their grooming routine, and there’s nothing much we can do about it. But if the licking seems more like an obsession, you can (and should) do something about it.

You’ll know whether your dog’s paw licking habit is purely an act of self-grooming by paying attention to how often they do it.

If they’ve got their tongue and teeth all over their paws almost every single time to look their way, take that as a red flag.

There are several possible reasons behind your dog’s excessive paw licking:

What can I put on dog’s feet to stop licking?

You’re probably here because your dog has gotten a little too passionate about licking his paws, and you’re sick of it. Maybe it’s the weird licking noises that annoy you, or you’re simply concerned and want to break the habit.

Whatever your reason is, you’re in the right place.

Try some of the home remedies listed above, and if all else fails, go for a special pair of dog socks. They work very well.

link to Puppy Growls When Picked Up (+ How to Stop)

Puppies are a bundle of joy, but some will have aggressive tendencies that can worry new owners. One of the more aggressive behaviors is when a puppy growls when picked up. It can happen when they...

While every dog is gorgeous in its own way, there’s just something about dogs with exceptionally soft fur and fluffy coats. If you have ever wondered what dog breeds the softest fur, then I’ve...