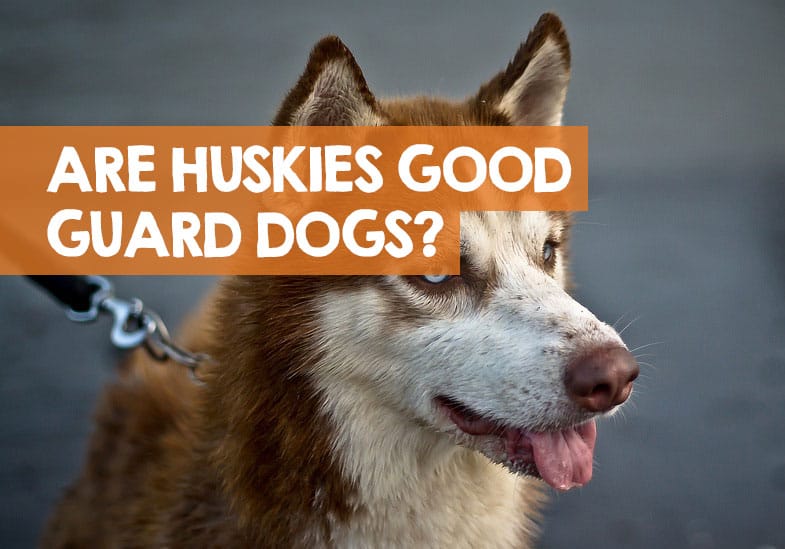 When you set your eyes on a Husky for the first time, it will be love at first sight. Their striking wolf-like appearance alone is enough to convince you that no burglar would dare to loot your home under this dog’s watch.

But can Huskies truly make the best guard dogs and just how protective of their owners, babies, and home are they? Here’s the truth about the suitability of this breed as a protection dog.

In short, you can’t entirely rely on a Husky to ward off trespassers on your property and attack anyone who poses a threat to your home.

Below I will explain why Siberian and Alaskan Huskies are not good guard dogs, despite their intimidating look. I’ve also included some notes on their personality traits for those wanting to train a Husky as a guard dog… good luck!

Are Huskies protective of their owners?

Any die-hard fan of Game of Thrones knows the fierce “direwolves” in the show that had people talking. Of course, these “wolves” weren’t real wolves but a specially trained dog breed related to Huskies, hence the wolf-like look.

Game of Thrones took people’s obsession with Huskies to a different level. There were reports that several fans of the hit show bought themselves a Husky to get a feel of these tough-looking dogs.

But it didn’t take long before cases of Huskies being abandoned in Husky rescue centers went viral. A sad turn of events, we can all agree on that.

I tend to think that some dumped this gorgeous dog because they realized the Husky wasn’t what they expected. Certainly not the overly protective dogs they saw on TV that you’d assume would make good dogs.

It’s easy to think that a Husky is protective and would do well as a guard dog solely based on their fearsome appearance. But don’t be fooled. If there’s a dog breed that can make awful guard dogs, it’s the Husky.

If we were to list down some of the key traits of a superb guard dog, we’d have the following:

A good guard dog has a strong drive to look out for their human best friend. Because they’re always ready to defend, they won’t hesitate to take down anyone who tries to break into your home.

One thing about guard dogs, they don’t tolerate strangers.

They only reserve their love for those that matter (their human family) and are highly suspicious of any unfamiliar person approaching your home. A guard dog won’t take their focus off a stranger until they’re sure the person means no harm.

Based on this, a Husky is not protective, well, not as much as you would want them to be as a guard dog anyway.

Huskies are overly friendly and playful. The Husky doesn’t know where to draw the line when it comes to friendships. Let’s just say their affection knows no boundaries.

They’ll want to extend love to any new face that shows up in your home — be it the mailman, the plumber you’ve called in, the visiting relative whom you haven’t seen in three years, or someone coming to rob you!

Truth is, Huskies are hardly suspicious of unfamiliar faces.  By the time a Husky figure out someone in your home is up to no good, it will be too late!

Stranger pleaser is the Husky’s middle name. If someone was to invade your home, I bet the first thing that would cross your loveable Husky’s mind is to roll over for a minute-long belly rub from the burglar.

But this doesn’t mean that Huskies aren’t protective to some degree.

Like every other loyal dog, a Husky will try to intervene if they realize their owner needs saving from an attacker.

Only thing here is, the Husky’s level of protectiveness is nowhere near that of a guard dog.

Handy Hint: Here are 14 dog breeds which might be able to kill a wolf if challenged.

2. Huskies are not highly territorial

The best guard dogs will display extreme territorial behaviors. They never approve of any stranger stepping foot in their owner’s residence.

A good guard dog will bark intensely to warn a “bad guy” thinking of crossing over to your compound to squash that idea.

Not unless you show up to at least convince a guard dog that you know the stranger and approve of them entering your territory, they’ll bark non-stop.

Huskies just aren’t territorial. By their nature, they are pack dogs and love being around other animals and people. Rather than chasing someone away from your territory, a Husky will be more than willing to share your territory with others.

Their inherited pack mentality makes the Husky crave socializing a bit too much. That’s why it’s easy for these affectionate wolf-like dogs to befriend an intruder instead of showing them the door!

Huskies also don’t bark as often. They howl more instead (possibly because of their wolf ancestry).

As we all know, barking is usually the main territorial signal that dogs often resort to when a stranger tries to enter your property.

Since the Husky doesn’t enjoy barking, they might fail to give you hints when a trespasser is making away with the lawn mower you forgot in your garden.

But there are more reasons why a Husky isn’t a good or protective guard dog.

3. Huskies are not easy to train

The perfect guard dog won’t give you a hard time when you’re trying to bring them up to speed with attack commands and other guarding tricks.

They are often willing to pay attention, so you’ll have a smooth training session because these dogs aren’t easily distracted.

When it’s time to train, they’ll give their all and not waste your time!

Training Huskies to be a guard dog is difficult!

Ever tried teaching a young child something, but they keep staring outside the window every five minutes, leaving you talking to yourself?

That’s how Huskies are.

I think getting a Husky to focus during a training session is much harder than convincing a meat lover to go vegan for a week!

Huskies are notoriously stubborn and easily distracted. They love doing things their way and will be disobedient when they feel like it.

Don’t believe me? See this Husky engaging its owner in a back-and-forth exchange simply because it doesn’t want to obey a simple instruction!

Huskies are too curious for life, reason they get quickly distracted during training. If the trash bin in your backyard falls in the middle of a training session, they’ll dash there and leave you hanging.

In a nutshell, winning a Husky’s cooperation during training is an uphill task.

Don’t get me wrong, though. Training a Husky isn’t impossible. It just needs lots and lots of consistency and patience. But a good guard shouldn’t make training frustrating in the first place!

4. Huskies don’t have the right level of energy

A good guard dog knows when it’s time to run around and when to stay calm so they can focus on keeping an eye on your property.

With the right balance of energy and calmness, you can be sure a guard dog won’t forget why you brought them home in the first place.

The thing with Huskies is that they have endless energy.

Huskies are excessively energetic. And that’s a big red flag. The problem with super hyper dogs like Huskies is they might be running up and down at a time when they need to stay on guard.

In fact, you might find yourself spending more time taking them through evercise rather than teaching them how to deal with the bad guys!

Will Siberian Huskies protect their owners?

Yes, just like every other dog that loves their owner and is loyal to them, a Siberian Husky will protect their owner if they realize someone’s trying to harm them.

But their level of protectiveness isn’t like that of an ideal guard dog that would protective babies and owners in the house.

Can you train a Husky to be a guard dog?

It’s hard to train a Husky to be a guard dog because, one, they’re difficult to train. And two, a Husky doesn’t have one of the most important qualities of a guard dog — being naturally suspicious of unfamiliar faces.

Training can’t make the Husky quit being overly friendly with strangers (it’s like it’s in their DNA).

Why are Huskies terrible guard dogs?

Huskies make terrible guard dogs because they befriend strangers, aren’t territorial, not easy to train, and have too much energy (they don’t have the calmness of an awesome guard dog).

Huskies have some amazing qualities.

But when it comes to being a guard dog, other breeds will do it better.