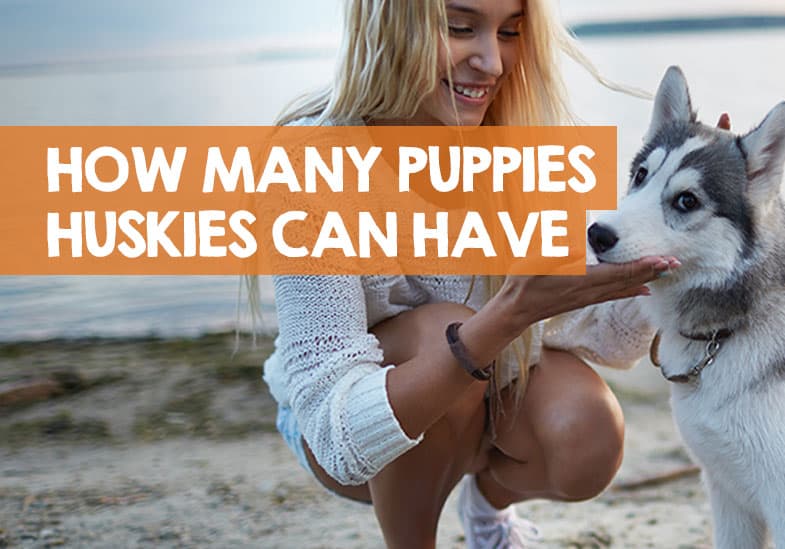 My neighbor recently brought home a husky puppy. She’s keen to breed with her pup once she’s old enough to have her first litter. The husky puppy is only eight weeks old, but it didn’t stop my neighbor and I wondering how many puppies a husky can have in their first litter. I researched it for you, so you don’t have to, including how many puppies huskies can also have in a second litter.

How many puppies can a husky have? On average, a husky can give birth to a litter of six puppies. Of course, this number can vary, and a husky could have less or even more than six. The number of puppies in a litter is dependent on factors such as the health of the mother, her weight, and her age.

Now that we know how many puppies a husky can have, it also got us thinking about how many litters a husky can have first time, second time, in her lifetime. After some investigation and discussions with various people in the know, I discovered some interesting facts about huskies, puppies, and litters.

Read on to find out everything you need to know if you’re planning to breed with your husky and want to know how many puppies to expect.

How many puppies can a husky have?

A husky is a medium-sized dog breed. They’re known to be highly energetic working dogs and need to be kept occupied as much as possible to maintain their overall wellbeing.

A healthy husky can give birth to up to 6 puppies in their first litter and even more in subsequent litters. However, it’s not abnormal if they only give birth to 4 or less puppies. While it’s known for a husky to give birth to 1 or 2 puppies, this is more unusual.

A number of factors will play a role in how many puppies a husky can have with each litter.

What influences how many puppies a husky can have?

There are a number of factors that influence just how many puppies your husky can have first or second time. It’s essential to understand these factors if you’re planning to breed with your husky. This way, your dog can be well-cared for as a breeding dog.

The following factors play a big role in influencing how many puppies your husky can have:

So, to get 4 to 6 puppies in a litter, your husky needs to be beyond her “adolescent” years, healthy, not obese, and be on a well-balanced diet. She shouldn’t be struggling with any underlying medical conditions. The size of the litter also depends on whether it’s the female dog’s first or second litter.

How old can a husky be to get pregnant?

Your husky can fall pregnant when they have their first heat cycle which is around 6 to 8 months old. However, it’s not advisable to let her fall pregnant at this stage of her life. She’s still a pup herself, growing and developing.

A female husky can fall pregnant throughout her lifetime. But, once she reaches 7 years old, pregnancy can become risky for her.

How many litters can a husky have?

A husky dog can fall pregnant at every heat cycle. However, dog breeders advise you should only breed your husky every 18 months. This gives her time to recover between litters. This means your female husky could have 4 to 5 litters in her lifetime.

Once they’re past their prime breeding age of 5 years old, the litter size will start to decrease.

What are the risks associated with too many litters?

Repetitive pregnancy with little recovery time in between puts strain on the female dog and the husky will start to present with health problems. Having too many litters will also influence the number of puppies at each birth, often being fewer than usual.

But it’s not only the pregnancy itself that puts physical strain on the husky. She also has to nurse her puppies and if the litters are too close together, she’ll battle to successfully nurse all her puppies. This will influence the puppies’ health and condition, at times leading to serious illnesses or even death.

Huskies bred between 2 to 5 years old, every 18 months are more likely to have 6 puppies in each litter than a husky who is bred younger and often.

A healthy husky at the right age can have between 4 to 6 puppies in their first litter, with subsequent litters having even more if they’re in good condition.

How can I tell how many puppies my pregnant husky is carrying?

You can’t take it for granted your husky is going to produce 6 puppies by simply looking at her! Counting how many nipples your husky has is also not the right way to calculate how many puppies she’s carrying!

Knowing beforehand how many puppies she’s carrying prepares you in many ways such as:

You can use the following methods to find out how many puppies are going to be arriving soon into your home:

While the last two methods are more accurate, there’s still the possibility of missing 1 or 2 pups so don’t be surprised if more than you expected are born on the day.

Now you know how many puppies a husky can have, how does that compare to other popular dog breeds? I’ve done the research for you, with some average litter sizes shown below.

How long is a husky pregnancy?

How long your husky will be pregnant for is the same as any other dog breed; an average of 63 days. If you are unsure that yours is pregnant, here are some pregnancy signs to check for:

As early as the first 20 to 30 days, a vet could feel your dog’s belly and might be able to say whether she is pregnant or not. After that the most accurate way to know she is pregnant will be an ultrasound 25 days after mating and then a blood test 5 weeks after mating.

Thanks for reading my guide to how many puppies huskies can have. Now you have an idea on what the average husky litter size is, it should give you an idea on why they can be so expensive to buy.

Huskies are a wonderful breed, but their journey into the world is far from simple.

If you want to breed husky puppies, this is not a task that should be undertaken lightly. You need to research, consult your vet and have plenty of money for medical expenses.