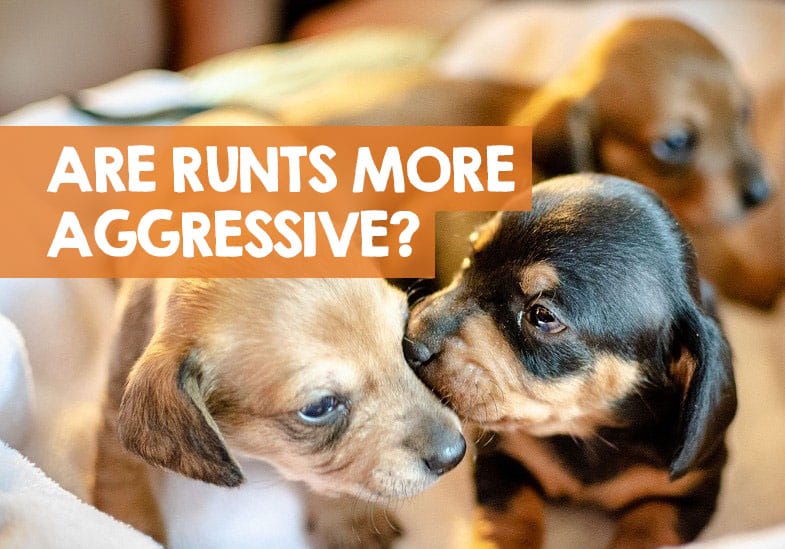 Runts are known as being the smallest amongst the litter, or at least, the weakest and most helpless. This isn’t actually the true. A runt is simply a puppy that is lower in weight than what is normal. Not every litter has a runt, but it will the most likely to be the smallest sibling.

I remember when my aunt’s dog had puppies, and there was one in there which was literally crying out for help. But overtime he actually started to become more aggressive towards the other puppies in the litter. This made me wonder if aggression was a trait of a runt.

Are runts of the litter aggressive?

To find out, I decided to canvass opinion from various dog owners I am in contact whose dog has had puppies in the last 12 months. I asked them over social media whether the runts in their litters were more aggressive. They had three options to answer from:

You can see the results in the pie chart below.

Whilst I was only able to canvass a handful of dog owners, there does seem to be a pattern where runts are not aggressive. I cannot find any scientific research to back up this claim though.

After seeing my aunt’s runt of the litter getting more aggressive, it made me think that it probably stood the puppy a better chance of survival. He grew up to be a healthy and normal sized dog, possibly due to the fact he was able to fight for the milk.

It’s important to note that this runt did not grow up to be an aggressive adult dog. This will be down the training my aunt gave him, plus the early socialization classes.

Bottom line is; much of a puppy’s behavior will be due to their training and development, not because they were the runt of the litter.

Why are there runts in the Litter?

Several suggestions have been made as to why runts exist in a litter. It has been said that runts are usually the smallest members of a litter and the development of the runt begins in the womb.

Some people say that the runt will generally be positioned at the middle of the “Y” of the mother’s womb, placing them further away from the nutritious blood supply that supports the puppies. This therefore results in them being small sized at birth.

I don’t believe this is based on any proper science though.

What we do know though, is that runts are simply underweight compared to their siblings. They will often come out last and appear smaller compared to the other puppies.

Since they are the smallest and weakest of the puppies, they are not as likely to be able to suck milk and access the colostrum produced immediately after birth by the mother. In addition to missing out on vital nutrients, colostrum also contains essential antibodies that helps the newborn puppies to fight infections and illnesses during their early weeks after birth.

Therefore, the runts require enough of it to eat as failure to get enough of it might lead to the vulnerability to disease attacks which my claim lives of smaller puppies.

Do runts of the litter grow to normal size?

Yes, runts can and often will grow to match the size of their siblings.

Whilst it is possible for the runt to remain smaller than the other puppies even when fully grown, it quite normal for them to catch up.  Once they start receiving the proper attention, runts will grow.

This is can be helped by the close interaction and one-to-one human care they benefit from while they are still little. The bond between these runts and humans grow stronger as they keep growing due to this individualized attention.

However, some runts can remain more delicate form a health perspective for the rest of their lives. It’s not always as cut and dried as this though.

Can the runt be the biggest?

A lot of it depends on circumstance. For example, runts born from stray dogs might find it difficult to grow and match the size of others. This is a result of poor feeding as they won’t get adequate nutrition for growth.

However, when discovered and adopted by a caring owner, there’s no reason why they cannot grow to be the biggest from the litter. J

One dog owner I spoke to had puppies with a runt among the litter. As soon as they discovered this, they made sure the runt received special treatment and care. In no time at all, the runt had grown and surpassed the other puppies in size.

It could also be a case of how different the runts responded to the food offered to them and how adequate he might have fed his runt to make it grow so well.

In summary, runts of the litter can be aggressive as some will have to do all it takes to ensure they survive. However, this isn’t always the case, and sometimes don’t even have the ability to compete aggressively due to their size.

In simple terms, there doesn’t appear to be a yes or no answer to the question.

Many runts will need additional special human care to help them survive among their more aggressive or larger littermates. Upon receiving appropriate care and assistance, runts might as well just grow to be like any other littermate though.