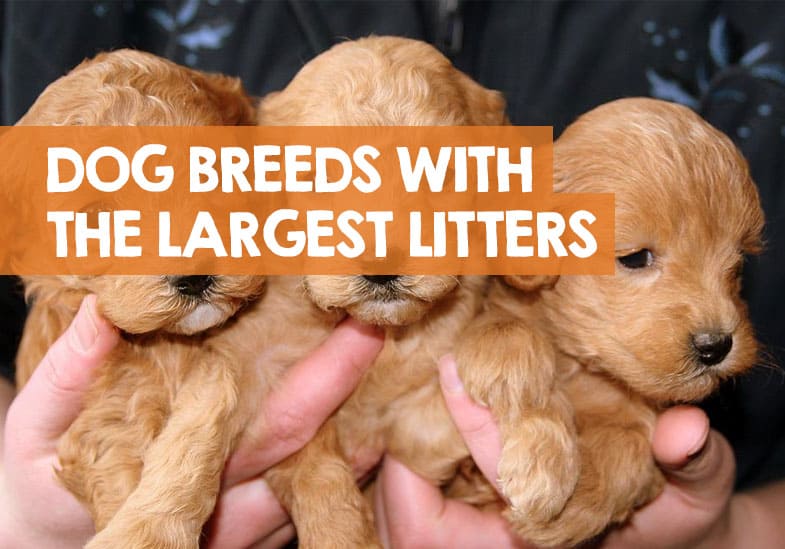 It’s not unusual for dogs to give birth to very large litters of puppies, but some dogs will go beyond what you might think is possible. In this guide I’ve listed dog litter sizes by breed so you can see what breeds have the largest litters…

But first, which is the winner when you consider which dog breed has the most puppies in a litter on average?

Larger breeds tend to have larger litters, meaning common large dog breeds such as German Shepherds, Golden Retrievers, and Rottweilers, can average around 8 puppies in a litter. The record for the largest ever litter belonged to a Neapolitan Mastiff who had 24 puppies.

The above is just an example of large dog breeds that have the most puppies in a litter. I’ve used examples, because there is no guarantee on how many puppies your dog will have, other than knowing large dogs, often have larger litters.

So, based on that, below I will explain what can determine the number of puppies in a litter, and give you a data table showing dog litter size by breed, so you at least have expectation.

The following common dog breeds have the largest litters.

What determines the number of puppies in a litter?

Whilst those dog breeds shown above give birth to the most puppies on average, it’s no guarantee. But there are some things which can determine litter size.

What is the largest litter of puppies born?

The largest litter of puppies ever born to a dog was 24 in 2004. The mother was a Neapolitan mastiff named Abellatino Arabella (“Tia”). She gave birth to 15 males and 9 females.

Yes, a whopping 24 puppies is the most puppies in a litter, ever.

Just imagine: You’re waiting for your heavily pregnant dog to give birth. You already have a rough estimate of how many new puppies to expect and have even prepared a spacious spot where your soon-to-be canine mom will nurse her babies.

Then the delivery day finally arrives. One, two, three, six, eight…ten. After puppy number ten, your vet tells you more are on the way!

What you don’t know is that “more” means your dog is about to make it to the Guinness world record for birthing the most puppies in the history of dog pregnancies! Talk of litter shock.

Which brings me neatly back to the Neapolitan Mastiff I mentioned a moment ago as being the record holder for having the most puppies in a litter.

To date, this number represents the largest dog litter size ever recorded.

The delivery process of a pregnant Neapolitan Mastiff is often a busy one. Reason being, Neos have are known to have up to 16 of puppies in a litter. That record of 24 was a crazy number.

But for Neos, over twelve puppies in a single litter is no big deal!

There are a few possible reasons why Neapolitan Mastiffs usually have more puppies than most dog breeds – based on those factors I mentioned earlier than can determine how big a litter size is.

As you might know, Neos are among the largest dog breeds in the canine world. The general claim is that the bigger the dog, the better its ability to safely carry several puppies at once. Makes sense why small-sized dogs rarely have big litter sizes.

Size aside, Neapolitan Mastiffs are likely to have more genes that give them a higher fertility success than other dogs.

Size and genes already give Neapolitan Mastiffs a huge advantage when it comes to litter success. So, when an expectant Neo has a nutritious diet throughout pregnancy, their litter size will be much larger than other dog breeds.

Middle-aged Neapolitan Mastiffs also have a higher likelihood of birthing many puppies.

The good and bad of large litter sizes

If you own a female (and unsprayed) Neapolitan Mastiff, you’ll probably become a dog grandparent to several adorable Neo puppies. I don’t know about you, but for some dog parents, watching many puppies snuggle up in the house can be a dream come true.

A large litter is also a good thing if you’re a breeder for obvious reasons — more puppies to sell, more money. But there are downsides, including:

Neapolitan Mastiffs are quite vulnerable to bacterial infections. This increases the risks of stillbirths since infections can pass from the mom to some of her unborn puppies.

But this doesn’t mean that pregnant Neapolitan Mastiffs always have stillborn puppies during birth. A Neo can deliver all-healthy puppies.

Low birth weight is also a possibility with big litter. A Neapolitan Mastiff might deliver a few (or just one) underweight puppies from her large litter. This happens because the many fetuses in her uterus compete for the much-needed nutrition to grow well.

Some puppies may die

The survival rate of all the puppies after birth is also not guaranteed. In the case of the record-holding Neapolitan Mastiff, three of her puppies died within the first week.

This sometimes happens because feeding all the newborns can be a problem for dogs with so many puppies. Like other large dog breeds, Neapolitan Mastiffs have ten teats. They can only feed ten puppies at once.

That’s an important consideration when asking which dog breed has the most puppies, because you don’t really want them to have more than 10, based on how many nipples dogs have.

So, unless you constantly monitor the litter to ensure every puppy is getting its share of the mom’s milk, some puppies might not drink enough. Underfed puppies die easily.

The nursing process is overwhelming

Tending to so many puppies at a go is no joke. A Neapolitan Mastiff might even get stressed out while trying to be the best dog mom she can be to all her puppies.

You’ll need to do something to help boost your dog’s milk supply. It’s not just new human moms that can suffer breast milk issues. Nursing dogs also have these problems.

And it’s worse if there are so many puppies depending on the mom’s milk for survival.

You must ensure your Neo is getting enough high-quality food, water, and supplements to increase her milk (with your vet’s guidance, of course).

C-sections only, no natural birth

Neapolitan Mastiffs can’t deliver through their birth canal because of the bulky head size of their puppies. C-section is preferred for this breed.

The problem with Cesarean section is that it puts a Neapolitan Mastiff and her several puppies at risk of serious complications.

So far, no other dog breed has managed to birth as many puppies in a litter as the record-holding Neapolitan Mastiff. But there’s been fierce competition in the dog world, with some breeds also birthing astounding litter sizes.

Let’s look at some of these celebrated canine heroes:

A Dalmatian shocked his Australian family when she delivered a staggering 19 puppies. That’s the largest litter size ever recorded from a Dalmatian.

Dalmatians usually have an average litter size of between six to nine puppies. But a Dalmatian can give to as many as 15 puppies in a litter.

In 2019, staff from an Arizona-based animal hospital helped a Great Dane deliver 19 puppies through C-section. All the puppies were born alive and healthy.

A typical Great Dane’s litter often has around eight puppies, so this was a huge surprise.

In 2014, a Bullmastiff earned herself the ”super mom” title for birthing 23 puppies in a single litter. She was just one puppy away from the 24-puppies-per-litter world record, and her family couldn’t hide their joy.

A four-year-old Irish setter stunned her family when she gave birth to 16 puppies. A typical Irish setter’s litter size ranges from eight to 12 puppies.

Her owner was expecting a big litter, but not 16. Unfortunately, one puppy was underweight and didn’t make it.

A six-year-old labrador birthed 14 puppies, which is considered the largest litter size in the Labrador world. The owner was anticipating around six to eight puppies based on what an ultrasound had indicated, only for her lab to deliver double the estimated number.

What dog breeds have the most puppies?

Large and medium-sized breeds like the Neapolitan Mastiff, the Great Danes, Dalmatian, and Irish setter tend to have the most puppies.

What breeds have the largest litters?

Breeds with the largest litters are the large-sized and medium-sized dogs such as Neapolitan Mastiffs, Great Danes, Dalmatians, and Irish Setter.

What is the largest litter of puppies born?

The largest litter size ever recorded (and stands to date) was from a Neapolitan Mastiff that birthed 24 puppies in a litter.

What determines the number of puppies in a litter?

A dog’s litter size depends on factors such as nutrition, genetics, size of the dog, and age.

If your dog is pregnant, and is a large breed, prepare for lots of puppies. However, the exceptions are not the norm, so whilst some dog breeds that have the most puppies in a litter could go over 10 – it’s unusual.