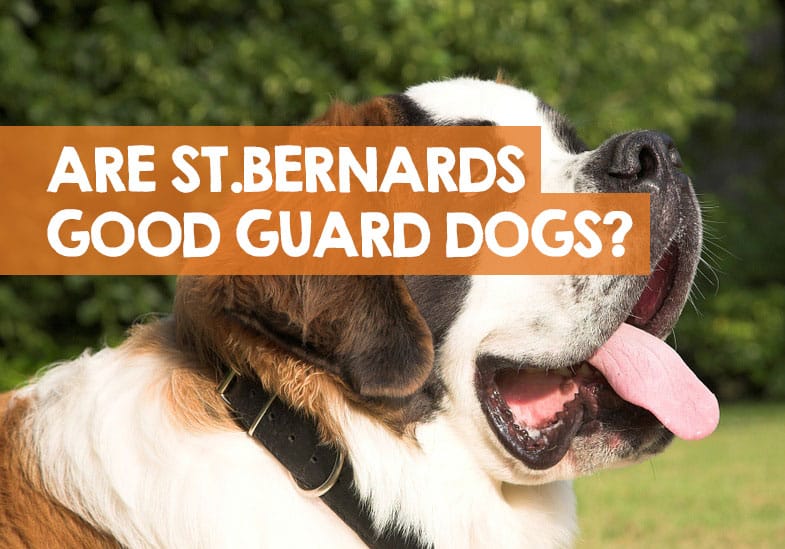 Given the size and sheer physical presence of Saint Bernards, you’d be forgiven for thinking that they make good guard dogs. But just what is the truth, and can Saint Bernards be protective to you, your family, and home?

In short, the Saint Bernard breed has what it takes if you’re looking for the perfect canine companion that can also double up as an amazing guard dog.

But just what is about the Saint Bernard that makes him so protective and guarding of his human family and home? What are the specific qualities that can make trespassers think twice about stepping foot on your property?

Below let me explain why settling for a Bernie to be your all-time defender would be a great choice as a guard dog.

If you ask lovers of the Bernie why they adore this dog breed, I’m pretty sure you’d be met with responses like, “what’s not to adore about a huge teddy bear trapped in a dog’s body?!”

I guess that’s what many of us think of when a Saint Bernard crosses our path.

And if there are three words that can perfectly describe this unfailingly loveable dog breed; “a gentle giant” would sum everything up.

Anyone who knows the Saint Bernard will tell you that behind that enormous body is an easy-going soul – which is why Saint Bernards blend easily with their family (both adults and children) and other household pets.

The best part is, the Saint Bernard can be your go-to dog breed if you’re looking for a family dog that will also buff up security in your home as a guard dog. This sweet and cuddly dog has the potential to make an intruder consider finding the next Bernie-unguarded home to loot, not yours.

Without further ado, let’s see why Saint Bernards are protective and so perfectly fits the role of a guard dog.

1. Saint Bernards are protective and strong

The most well-known guard dogs are often well-muscled and have giant-like appearances. Saint Bernards have a powerful look that can intimidate even the most brazen-faced intruders.

And it makes sense why Saint Bernards are considered a protective breed that can help to guard your home effectively.

Put it this way: on average, a full-grown male Bernie will weigh anywhere between 120 pounds and 180 pounds, but it isn’t uncommon for an adult male to surpass 200 pounds!

Also, a Saint Bernard’s height ranges anywhere from 28 inches to 30 inches. Their weight is usually proportional to their height, giving this dog breed a towering stature that can deter anyone planning on carrying out any funny business on your property.

Now just imagine how an intruder might feel when faced with this dog.

Saint Bernards earn the “powerful” reputation without trying too hard. You can trust this big guy to scare away anyone who wants to get away with your stuff

You can’t mention a Saint Bernard being a good guard dog without intelligence being a factor. A guard dog must be smart enough to quickly differentiate a familiar face from a potential threat and spring into action if need be.

And that’s what a protective Saint Bernard will do.

Saint Bernards are intelligent enough to assess a potentially dangerous person on your property and raise the alarm by barking. At the same time, they can decipher situations that simply require them to maintain their cool.

Though not typically aggressive, an intruder who doesn’t heed the Bernie’s warning can face this dog’s full wrath — You’ll for a moment forget their calm demeanor exists.

Since Saint Bernards are impressively strong, pinning down a home breaker is something they’ll do with great ease. That’s for sure. See how this Bernie saved the day by giving a burglar a taste of his medicine.

3. Their trainability is unmatched

The best guard dogs must be quick and willing to learn new attack commands and tricks. And that’s the good thing about Saint Bernards being guard dogs.

Saint Bernards are highly trainable and protective. This has got to do with how smart they are, and because they are often so eager to impress their master.

If a dog that obeys your commands helps to make a good guard dog, then the Saint Bernard fits the bill as he will always attentively listen to you. Lucky for you, it will be easier to take them through advanced commands used for guard dog training.

Sometimes I think that “Your wish is my command!” is the Bernies’ life motto. They never think twice about doing whatever their handler asks them to.

This is what any potential guard dog owner would want. And because Saint Bernards make training super easy, it will be to your advantage if you have a young Bernie you’d like to mold into a badass guard dog to protect your home.

Keep in mind, though, that this breed can be lazy. They might therefore need a push when it’s training o’clock. Using motivational training (giving special treats and heaping praises) always does the trick!

Believe me when I say that when Bernies love, they love for real. That’s why they are incredibly devoted to protecting those they cherish to bits.

This is why owners always say how Saint Bernards are a protective dog breed. It’s true.

And that’s good because any good guard dog should be fiercely loyal to their owner, such that they’d be willing to put their life on the line for their human best friend.

This is the type of loyalty you’ll find in a Saint Bernard when they serve as your guard dog. They don’t joke when it comes to family guardianship.

And let’s also not forget how deep a Bernie’s bark and growl are. The St. Bernard is among those dog breeds that don’t bark unnecessarily.

Unlike some dogs that treat barking as a hobby, you won’t expect a Saint Bernard to bark and growl non-stop when looking at their shadow or at every harmless bird flying and hitting your window.

So, when the Bernie lets out their loud, deep bark non-stop, you’ll know they’re trying to alert you about something more important than their shadow or birds — intruders!

5. They are extra vigilant

The Saint Bernard will keep an eye on your property like a hawk. They are often attentive to what’s happening in their surroundings, which is one of the admired qualities of awesome guard dogs.

You can count on the Bernie to alert you if they notice anything odd going on in your home. Perhaps this high level of alertness is the reason Saint Bernards were used as rescue dogs in the past to help find lost travelers in snowy mountains.

The fact that Saint Bernard made rescue operations back in the day more successful means they’ve got a certain level of vigilance that many dogs don’t have.

The Saint Bernard became famous when they took part in tough rescue missions. To this date, Bernies are exceptionally courageous. Their fearless attitude is praiseworthy.

You won’t catch a Saint Bernard running away from an intruder just because the bad guy is holding a big stick. That’s how guard dogs should be —  brave enough to face a burglar head-on.

Yes, that’s correct. Saint Bernards have strong protective instincts because they are incredibly loyal to their human family. You can count on them to protect you in case of anything.

Can Saint Bernards be vicious?

Saint Bernards aren’t vicious despite their massive size. On the contrary, they are among the famous (and heavy) dog breeds with a calm demeanor. They rarely show any form of aggression.

Are Saint Bernards the strongest dogs?

Yes, that’s correct. The saints are well-known for being among the perfect family dog breeds. They get along with children and other pets in the house because of their friendly nature.

You can’t think of the Saint Bernard without obsessing over its gorgeous white and orange-ish fur coat, drooping cheeks, and of course, its gigantic size. But can this popular dog breed make a great guard dog?

What’s not to love?