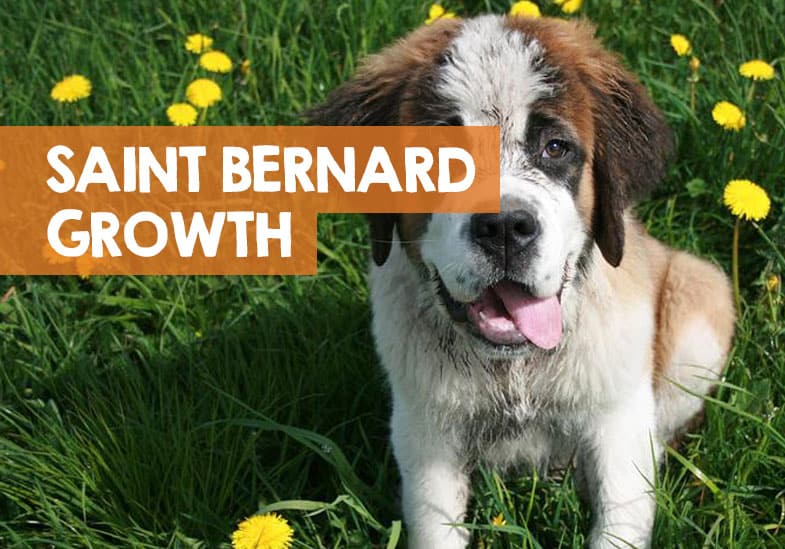 If you are considering bringing home a Saint Bernard puppy or already own one, you will be very aware of this breed’s size: even the youngest of Saint Bernards are large. Which can be a concern if you’re not prepared for it, either financially, or in how your home is set up.

I can sympathize with you, as it might appear that your Saint Bernard is getting larger by the day, with no signs of stopping. But just when do Saint Bernards stop growing?

The average Saint Bernard should stop growing when they reach two years old. By this point in their development, growth should finally stop when they reach their adult height and weight. But some will continue adding muscle and height until they turn three years old.

In short, Saint Bernards stop growing when they hit two or three years. But don’t be surprised if your Saint Bernard’s growth journey takes longer.

Female Saint Bernards can also stop growing at the age of two, sometimes up to three years old. The average female Saint Bernard will grow to be 120 to 140 pounds (54 to 63 kg) with a height of 26 to 28 inches.

Keep scrolling as I run you through what a typical Saint Bernards’ growth timeline looks like, so you’d know what to expect as your puppy develops. I’ll also cover useful tips you should consider if you want your lovely pup to grow healthy.

Anyone who’s a huge fan of Saint Bernards or raising an adorable saint puppy will tell you how fascinated they are by this dog breed’s size and the growth stages they go through. And the cherry on the cake is that their affectionate attitude is as big as their massive size.

It’s no surprise that Saint Bernards are often described as gentle giants. They for sure live up to this title!

This unique size is also what makes Saint Bernard puppies stand out from other pups. When compared to puppies from other breeds, Bernie puppies often look like mini-giants — with a charming personality, of course.

Perhaps that’s why many new Saint Bernard puppy parents are always eager to know just how big their “already big” pup will get, and at what point a Saint Bernard will stop growing.

Saint Bernards stop growing when they turn two (24 months). But it’s not uncommon for some to keep growing until they finally hit the three-year mark.

You might have heard the myth that Saint Bernards grow for as long as they live. Now you know that’s a fat lie. This breed completes all their physical growth by the time they reach their second or third year of life.

Saint Bernards grow fast in stages, which is the trend with almost all the best-known large breeds. A Saint Bernard is expected to have a certain weight at a certain age as it transitions from a pup to an adult dog.

Here’s what an average Saint Bernard’s growth stages and cycle looks like:

Bear in mind that these Saint Bernard growth stages are simply estimates. No need to freak out if your lovely dog’s weight falls slightly below these projections.

It’s perfectly normal for some Saint Bernards to lag behind a bit in terms of weight. What matters most is them being in good health.

How much do Saint Bernards weigh?

However, if there’s an alarming difference in your dog’s weight — for instance, their weight when 8 months old (as a male) stands at 80 pounds and not anywhere between 100-120 pounds as estimated, consider speaking to your vet.

When a Saint Bernard turns two, they’ll have reached their adult size as follows:

How to predict how big a Saint Bernard will get

At times, curiosity gets the best of us, and you’d want a rough idea of how big your Saint Bernard puppy can grow.

The best way to satisfy your curiosity is by getting the relevant info from your breeder. You can ask them about your pup’s parents’ sizes, particularly their same-gender parent.

In other words, if your Saint Bernard puppy is male, pay attention to their dad’s size. There’s a high chance they’ll attain a similar size as their father’s size and growth stages.

Genetics is by far the almost-accurate indicator of what size a Saint Bernard will be.

So, if your dog doesn’t end up as enormous as you hoped they’d look, yet your vet confirmed they were healthy with each age milestone, blame it on their genes!

If you’ve adopted your Saint Bernard puppy and have no clue about their family tree, you’ll simply have to be patient and watch them grow. There really is no such thing as a Saint Bernard growth calculator… I wish! If there was it would make predicting their growth a lot easier.

It’s best if you keep in touch with your vet so they can help you know if your pup is growing at the correct pace and that their weight suits their height.

Another way you can tell your Saint Bernard isn’t done growing is a rather awkward one — looking at the size of their paws.

If you notice your saint has oversized paws that give off the “ insanely big paws, small body” sort-of vibe, that’s a sign that you should brace yourself for more growth.

How to help your Saint Bernard grow big and healthy

If you’ve decided to bring home a Saint Bernard to be your cherished furry companion, there are a few things you can do to help them grow in a healthy manner.

Let’s look at what you can do to set your St. Bernard on the path to a healthy future:

Providing your St. Bernard with proper nutrition is a sure bet they’ll grow to their full potential.

Settle for pup food specially formulated for large breeds like the Saint. Your vet can guide you on this — consult them if you don’t want an undersized adult Saint Bernie.

And when it comes to giant breeds, portion control is everything. The worst mistake you can make is free-feeding your Saint Bernard.

You see, Saint Bernards grow so rapidly such that their bones don’t get enough time to fully develop in strength (not until their growth period ends). So, when your puppy overeats, the extra weight will put more strain on the already strained joints and bones.

As a result, they’ll develop musculoskeletal issues at a tender age. Since any illness affects a dog’s overall appetite, a musculoskeletal condition will compromise your Bernie’s physical growth.

Even when training your young Saint Bernard who is still growing, it’s best to avoid rewarding them with high-fat treats.

Still on feeding, let your Saint pup grow at their natural rate. Don’t try to hasten their growth by overfeeding them.

Because of how vulnerable a Saint Bernard’s joints and bones are, you should go easy with the exercises when your pup is below two years.

Strenuous activities will lead to injury and musculoskeletal problems, affecting their growth.

But this doesn’t mean you should steer clear of physical exercises. Inadequate exercises will also bring issues because this breed needs physical activity to enjoy proper muscle development.

Light (but frequent) exercising is key.

Seeing the vet often is highly recommended so they can constantly physically monitor your Saint Bernard’s growth progress and advise you accordingly.

Moreover, sickness can take a toll on your dog’s appetite and eventually growth, so you should ensure your pup doesn’t miss any vaccinations (to avoid things like parvo).

How big will my Saint Bernard get?

Truth is, there’s no clear–cut answer to this, as your Saint Bernard’s size will depend on crucial factors such as genetics and their nutrition as they grow.

But generally, a healthy male Saint Bernard can reach 140-180 pounds as an adult, while a healthy female can reach 120 to 140 pounds.

How big is a 7-month-old Saint Bernard?

On average, a 7-month-old Saint Bernard weighs between 90 and 110 pounds, while a female one should weigh between 75 and 100 pounds.

How much should a 6 month old Saint Bernard eat?

It’s best if you speak to your vet so they can advise you on the right amount for your 6-month-old Saint Bernard.

Owning this breed should not be taken lightly (no pun intended) as a Saint Bernard will grow to be very big, and it might be three years before they stop growing completely.

It’s a big financial commitment, but will also mean you need a big space, for a big dog.