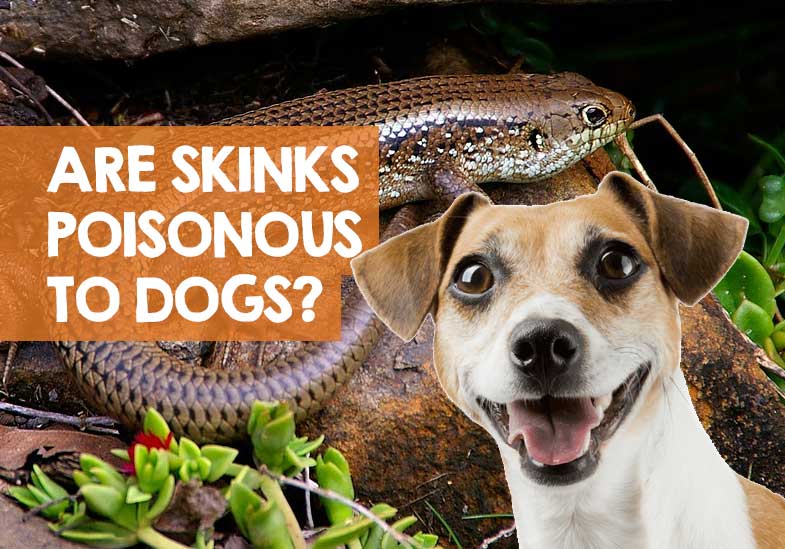 Whilst skinks are very secretive reptiles who like to burrow and hide, it’s not unusual for your dog to encounter them. Skink lizards are found in many countries including Australia, Canada, New Zealand, and the United States and will often live near urban areas. They will still come out in the daytime and can be an attractive proposition for many domestic dogs.

For dogs with a high prey drive, or just a curious nature, skinks can present a very interesting challenge. They way they skitter and scuttle make them highly visible to dogs who will give chase. As a result, there can be occasions when your dog can eat a skink, a skink tail, or even just their poop.

Dogs can eat and will eat anything they catch, and some dogs do eat skinks if given a chance. In most cases, the dog will chase the skink, and if they grab the skink’s tail, it will break off and continue to wiggle.

This is a defence mechanism of many lizards, as the predator which in this case is your dog, can then be distracted by the tail which still appears to be still alive and active.

If the skink retaliates and bites your dog, you dog should be ok as skink bites aren’t that strong. It could leave a mark, and possibly break your dog’s skin at the very worst. Skinks are more likely though just going to run away and are able to scale trees very quickly!

Thankfully there are no venomous skinks in the world, and from what I’ve found, none of them can deliver a poisonous bite or sting to your dog.

But if the skink is eaten by the dog, how toxic and poisonous can that be?

Are skinks poisonous to dogs if eaten?

There is no scientific research or study to suggest that skinks are poisonous to dogs. However, that doesn’t mean that your dog won’t get ill if they eat a skink.

The reason being, some reptiles can carry parasites and salmonella. If ingested, there is a slim chance that your dog could become ill from eating the skink. Signs of salmonella poisoning in a dog include:

There is a very, very slim chance of liver flukes. Liver flukes are parasitic worms (platynosomum concinnum) that are known to affect cats rather than dogs. Researchers say liver flukes are unlikely to affect a dog, but it’s still worth mentioning if you see your dog behaving strangely after eating a skink.

The bottom links is, skinks are not toxic to dogs, and there are no poisonous skinks anywhere in the world.

What happens if a dog eats a skink?

If you dog eats a skink, he’s probably going to vomit it up. If he does ingest it, then the worst that is probably going to happen will be a bacterial infection. It’s unlikely that your dog will die from eating a skink, and certainly won’t be poisoned.

The general consensus I have found online is that eating a skink on a rare occasion is unlikely to cause your dog any lasting problems… but it should be discouraged for sure.

What about skink poop?

I would discourage your dog from eating skink poop. As with any other animal’s feces, it can carry the risk of bacterial infections such as salmonella.

Are skinks poisonous to dogs in the United States?

Skinks are found in 47 states in North America, with Alabama, Florida, and Texas all being home to 6 or more skink variations.

That means it’s not that uncommon for a dog in Florida or the other places listed to encounter and possibly even eat a skink.

However, according to what I have found online, you dog will not find skinks toxic, but there is a slim chance of a bacterial infection.

Some common skinks found in the USA include:

Are skinks poisonous to dogs in Australia?

From the research I’ve done, I cannot find any evidence of skinks in Australia that would be dangerous and toxic to dogs.

As a quick disclaimer I just want you to be aware that everything you have read here today is based on my own online research.

Whilst I can find no evidence of skinks being poisonous to dogs, and no related fatalaties, that doesn’t mean you should not exercise extreme caution.

If your dog has eaten a skink, please do consult with your own vet, to get a professional opinion and diagnosis.

I frequently research what things could harm my own dog, and here’s a list of some of my more recent studies into this topic.