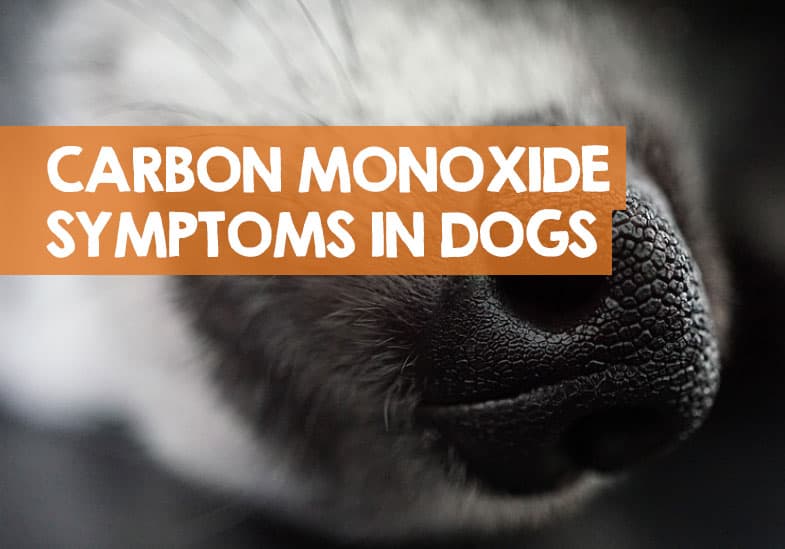 Despite what you might have heard, dogs cannot detect carbon monoxide, and are just at risk of poisoning from this silent and odorless killer as we are. In fact, if anything, dogs are more susceptible to carbon monoxide poisoning, so if you have a leak in your home it’s your dog you will notice the symptoms in first.

But what are the signs of carbon monoxide poisoning in dogs, and how would you know if your dog was slowly being poisoned by this invisible killer gas?

I’ve researched into the truth this week, so can now present to you the most obvious (and not so obvious) carbon monoxide symptoms in dogs. Before I go further though, please do make sure you have a detector in your home – here’s a good one on Amazon.

Here are the symptoms to look out for.

Once the carbon monoxide starts to get in into your dog’s blood stream, he can start to become irritable, nervous, and anxious. The change in behavior should be very easy to spot; it’s often been reported that some dogs will refuse to come in the room where the leak is.

2. Your dog will be unsteady on their feet

The next symptoms of carbon monoxide poisoning in dogs will be how they walk and balance themselves. You will notice what appears to be dizziness and possible confusion as they find it hard to stead themselves and can have blurred vision.

3. Your dog will suddenly start to vomit

The next sign will be nausea followed by sudden vomiting. If your dog has nothing to vomit up, they might dry retch.

4. Your dog will appear lethargic and sleepy

As your dog’s body is slowly deprived of oxygen, they will start to get lethargic and sleepy. You could see them find a place to lie down or their head starts to nod off.

5. Your dog’s breathing will become difficult

As the carbon monoxide poisoning takes hold, your dog’s heart rate will increase, and he will start to struggle for breath. You will notice him attempting deep breathing and possibly start to gasp for air.

6. Your dog will have muscle spasms and seizures

Another symptom of carbon monoxide poisoning occurs when it produces an uncontrollable burst of electrical activity in your dog’s brain. This will result in jerking muscle spasms which can look like seizures.

7. Your dog’s gums might change to cherry red color

A further sign that your dog is suffering from exposure to carbon monoxide will be bright red lips and gums. This happens due to the high levels of carboxyhaemoglobin being produced in your dog’s blood.

8. Your dog will lose consciousness and slip into a coma

Handy Hint: Here’s my guide which explains why it is not possible for dogs to smell for carbon monoxide poisoning.

As well as the major signs described above, there are also minor carbon monoxide symptoms in dogs to watch out for. These typically occur with exposure to very low levels of carbon monoxide.

The symptoms can appear to be something similar to flu symptoms or food poisoning. The difference being, your dog won’t have a high temperature like he would do with flu.

Given what we now know about what carbon monoxide does to dogs, please invest in a detector. They are very cheap, and you can buy them on Amazon. It won’t just save your dog’s life, but also possibly even yours!

Why is carbon monoxide so dangerous to dogs?

The reason why the side effects of carbon monoxide poisoning are so serious in dogs (and humans) is down to what it does to the oxygen in our blood. OSHA, the Occupational Safety and Health Administration explains the following:

“Carbon monoxide is harmful when breathed because it displaces oxygen in the blood and deprives the heart, brain and other vital organs of oxygen. Large amounts of CO can overcome you in minutes without warning — causing you to lose consciousness and suffocate.” (view source)

Will carbon monoxide kill a dog?

Carbon monoxide can kill a dog, and in fact, it has been used to euthanize dogs at animal shelters for many years. When the gas is released into a small area, dogs can die from asphyxiation, kidney damage or an induced coma.

The first reference I can find online where carbon monoxide was used to kill dogs was a study from 1968, where the gas was used in Japan for trials. You can read more about of what happened on the Wiley Online Library, but here’s a synopsis of the results:

It sounds like a relatively humane way to euthanise compared to other methods; if you believe what you read from that study about the side effects of carbon monoxide poisoning in dogs of course.

However, not everybody is in agreement of using carbon monoxide to euthanize dogs, with the PETA animal rights charity having an opposite view (as you would expect).

“Carbon monoxide poisoning has been routinely used at animal shelters in the past and is still in use at some smaller facilities. The process can cause animals to suffer while they slowly suffocate. It can take up to 30 minutes for some animals to lose consciousness, during which panicked animals may gasp for breath, try to claw their way out of the chamber, and attack each other. Some animals must be gassed repeatedly before they die, while others have been found alive in freezers and stumbling around landfills after being thought dead.”

You have to agree, that sounds like a very gruesome way for a dog to die.

And here’s the thing; carbon monoxide is still used in some animal shelters around the United States for this very purpose. It’s certainly not as common a way to kill dogs as it once was, but it still being used by some estabishments.

States that have banned the use of carbon monoxide to kill dogs include:

Others are still to follow, so if you are concerned about the side effects of carbon monoxide poisoning in dogs and don’t think it should be used for euthanasia, check with your local state laws.

Why are dogs more at risk of carbon monoxide poisoning than us?

Before I explained what the symptoms of carbon monoxide poisoning in dogs are, I mentioned they are more at risk of death than we are. The reason being is quite simple; they are smaller than humans, have smaller lungs, plus their lungs are said to be more sensitive than ours.

You don’t need me to explain why being smaller makes little dogs feel the side effects of carbon monoxide quicker than us, but why are dog lungs more sensitive?

I don’t know this for a fact, and am simply going off what a vet said on the Dogster.com website in 2013, which I will quote parts of below:

“Dogs’ cardiovascular and respiratory systems are designed for high performance… dogs’ ancestors had to be extra fit. It was an arms race, with the heart and lungs of predator and prey evolving ever more impressive endurance and performance. Basically, the heart and lungs of dogs are like a Ferrari engine. if you put dirty gas into a Ferrari, you can expect bad results and a very expensive trip to the mechanic.”

It’s a slightly convoluted analogy, but the point he’s making is that a dog’s lung are very sensitive to gas and pollution in the air, so will react badly due to their high sensitivity and high performance. To read more, and get a better idea of the context of the quote, read the blog post on Dogster.com.

If you see or suspect any of these symptoms in you or your dog, then get them out of the house immediately into fresh air and call emergency services, and a vet.

Vets will aim to re-oxygenate your dog’s blood as quickly as possible to replace the displaced oxygen. They do this by administering oxygen therapy with breathing masks, hooking up intravenous fluids, plus respiratory support like a ventilator.

I regularly blog about things that are dangerous and poisonous to dogs, so you might enjoy reading some of the following guides.