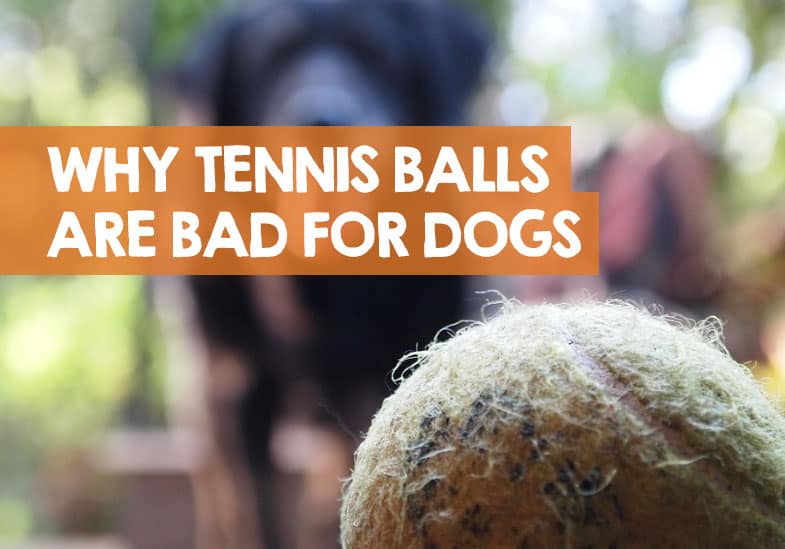 My dog loves any type of ball, but when it comes to tennis balls, he’s completely addicted to getting his jaws around them. But this insane addiction could come at a cost and is potentially unhealthy for him.

Read on for why tennis balls are not safe for dogs, are bad for their teeth, and even have the potential to kill. Here’s the short answer first, followed by my reasoning.

The bottom line is, there are no standards for non-professional tennis ball production when it comes to the ones you might pick up cheaply in a store. Whether it’s a used tennis balls, pressurized tennis ball, they can be dangerous and, in some cases, even toxic.

Are tennis balls safe for dogs?

Although throwing a tennis ball for a dog to fetch is completely harmless, the main concern centers around whether they should be allowed to use them as chew toys. When dogs chew tennis balls, this is where the dangers can present themselves.

Here are all the reasons why tennis balls are bad for dogs to chew on.

1. Toxic substances used in the design of tennis balls

I wanted to start with one of the lesser-known reasons why tennis balls are not safe for dogs, and that’s the risk of them ingesting something toxic.

Tennis balls can be toxic to dogs because there is no global standard in manufacturing for the cheap tennis balls you might pick up under a dollar or a pound.

You simply don’t know what’s gone into making the tennis ball at the factory or where it’s been made. Have they been tested to safety standards as dog chew toys? You probably won’t have a clue.

For example, there could be toxic lead in the tennis balls your dog is chewing. Research conducted in 2009 by the Ecology Center in Michiganfound that:

As you can deduce from that quote, cheap tennis balls are toxic to dogs potentially due to the lead levels in the lettering printed on them.

There’s also the glue that the tennis ball felt or hair is stuck on with. That is potentially toxic to dogs too, although I don’t have any data to back that claim up.

No matter where it’s an expensive or cheap tennis ball, your dog will make quick work of it, removing the yellow felt and splitting the rubber up into pieces.

This is why tennis balls are bad for dogs to chew on, as there are some many pieces that your dog can chew on.

I am sure you will have seen chewed up tennis balls at your local park. You tend just to have long strips left, and none of the hairy felt bit left over.

The rubber pieces and the felt can easily choke a dog. They can also be swallowed, causing an internal blockage. Sometimes it can take days until you even know your dog has a blockage.

Signs of blockages (and toxic poisoning) to look out for include:

Even if your dog doesn’t destroy the tennis balls completely, they can still be dangerous.

Handy Hint: Your dog might also like playing with balloons, but did you know that some dogs have a very real fear of balloons?

The pressurized rubber design means a dog’s jaws can compress the ball, swallow it to the back of the throat, and it then pops back into shape, causing a block.

Despite this being a rare occurrence, dogs have choked on tennis balls, and many have died as a result.

Here’s a report from the UK where a dog nearly died, which is also quoted below.

“A dog owner has implored fellow animal lovers to stop giving pets tennis balls after her Alsatian nearly choked to death on one. The ball became lodged in his throat, so Mr. Riley grabbed a car to take the beloved pet to an emergency care service in Bury.”

However, it is worth mentioning that choking can happen with any sort of chew toy and is not just a problem related to tennis balls. With the proper caution and observation, tennis balls can still be thrown for your dog to chase.

3. Tennis balls are bad for your dog’s teeth

Unfortunately, there is some evidence that suggests that tennis balls are bad for dog’s teeth. They are said to cause dental wear to dogs who use them in this way.

It’s all down to how tennis balls are designed to withstand multiple bounces on hard surfaces and heavy hits by rackets.

Although the fuzzy furry felt on a tennis ball might seem soft at first glance it can quickly wear down the enamel on a dog’s teeth, especially after extensive chewing.

This, in turn, can have a detrimental effect on your dog’s oral health and cause issues with their teeth later on in life.

Here’s a quote from an expert on the Animal Dental Specialist website.

“Tennis balls and other objects with abrasive surfaces should also be avoided as these have a sandpaper-like effect on tooth structure that damages and may expose the pulp.”

Therefore, tennis balls are bad for dogs to chew, so only use it as something to play fetch with if you really have no other options.

Now you know the risks and how dangerous tennis balls can potentially be, you will want to consider alternatives chew toys. Thankfully there are plenty of alternative dog-friendly tennis balls and toys on the market.

For example, most pet stores sell balls and toys specifically designed so that they do not damage your dog’s teeth or cause choking.

All of my recommendations below can easily be found online and can be ordered at the click of a button, arriving within no time at all.

And that’s just what this selection below does (view on Amazon). It’s made from non-toxic soft plastic, which is easy on developing teeth and gums.

There are spaces in it for you to put snacks and other small treats. As your dog works to retrieve the tasty rewards, he challenges his intellect, burns energy, and stays out of mischief with this dog friendly tennis ball.

Kong make this, and they always do great products for dogs who love to chew. You can read the Amazon reviewsto see for yourself.

Not only is it puncture resistant, unlike tennis balls, it also has an extra bounce factor which will drive your dog crazy with excitement.

Despite the love our canine friends have for tennis balls, I don’t believe that are that safe to play. You will find mixed opinions on the subject with some owners advocating letting dogs chew on tennis balls whilst others are firmly against this.

I am firmly in the no camp.

It’s so cheap to buy safer alternatives to tennis balls, it makes no sense to let your dog risk their health by chewing a potentially toxic choking hazard that can also damage their teeth.

In many households around the country, tennis balls are banned, and increasingly more and more owners are opting to use them only for their original purpose.

I recommend you take the same approach if you agree with me that tennis balls are bad for dogs.