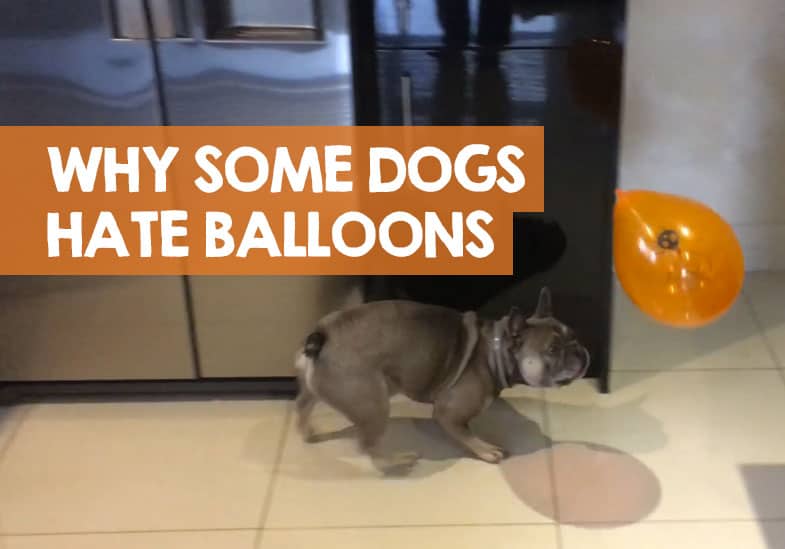 When you think of balloons, you tend to conjure up an image of birthday parties, family get-togethers, and celebrations. Based on this, you might wonder why why some dogs are scared of balloons, given how much fun and excitement they can bring.

My dog loves balloons. He will chase, catch, and then pop the balloons (which we have to stop, as it’s not that safe). Not all dogs like balloons though. For example, my friend’s dog has a real fear and anxiety towards balloons.

I decided to research why this could be. Plus, I even found accounts online where some owners report their dogs being scared of hot air balloons too!

Why are some dogs afraid of balloons?

Not all dogs are scared of balloons, just some. Like I said already, my dog loves them. But why is it that your dog is afraid of them, and other’s like playing with balloons.

Generally, there are two reasons why balloons can cause a negative response in dogs into hating them.

Firstly, some dogs will be scared of balloons due a fright caused by the balloon or a situation where there were lots of balloons present. Maybe they thought it was a big ball and dug in their teeth only to be scared silly once the balloon popped.

The second reason can be because of a lack of experiencing new things as a puppy. The window for puppies to learn about the world is pretty small, and after that period, new experiences can be met with worry and anxiety – this will often lead to them peeing themselves when scared.

If your puppy didn’t have the opportunity to see and experience lots of new things as a youngster, they might now react with fear when faced with something they’ve not seen before.

Just imagine how weird a balloon might appear to dogs who have anxious personalities. It looks like a ball but doesn’t behave like a ball. It will smell strange and behave oddly when they touch it. It also has a strange texture to it.

To a dog, that could induce anxiety and fear.

And this fear even has a name; globophobia. According to the FearOf.net website, globophobia is defined as the following:

“Globophobia originates from the Greek words globo meaning spherical in terms of balloons and phobos which means deep dread or fear. People suffering from this phobia feel morbid fear at the thought, sight, touch or even smell of balloons. Most individuals, however, are only afraid of the sound made by the popping of balloons.”

Why do dogs love balloons?

On the other hand, you might have a dog that likes balloons. Mine does and loves it when we play with them.

He likes to jump up and bite at the balloon, forcing it back up into the air, only to float down again and torment him. This game can go on for ages!

And my dog isn’t alone in loving them. Many of our four-legged friends will love bouncing balloons around and may even enjoy making them pop, so this certainly isn’t a problem that affects all dogs.

The reason dogs like balloons is the opposite to why some won’t love them; it’s all down to the way balloons behave, feel, and sound during play. Almost like prey, they can then catch and kill a balloon – this is great for dogs with this type of personality.

Handy Hint: Some dogs are bred to have high prey drive. For example, here are some dog breeds that are excellent at catching rats.

Why some dogs are so scared of balloons

We’ve already mentioned that the bang of a popped balloon might be the thing that’s causing the fear, but they could well be other reasons too. Here’s more detail on what induces the fear in some pets.

If you think of how a balloon moves around a room, bouncing off the furniture and then flying through the air, there aren’t many other objects that move that way. For some sensitive dogs, that weird movement might be enough to make them decide that this is something to keep well away from.

Now think about the rubbery smell of a balloon, and then imagine how overpowering that smell might be if you had the smell sensitivity of your dog.

If your dog has been comfortable enough to investigate the balloon, he might then be confused by its texture.

Certainly, if he tries to take it in his mouth, he’s going to find it challenging to get hold to carry, and then, there’s the threat of the bang if he does finally take it in his teeth.

Why are dogs scared of hot air balloons?

I mentioned at the start of this how I found something online about dogs being scared of hot air balloons. I think this is best left to the DreamDogs.co.uk website who it explain it as follows.

“It’s a combination of the unfamiliarity with something so large and daunting floating overhead, and the loud, sudden noise of a burner firing up. The latter of these elements is only likely to frighten a dog if you’re standing fairly close – for instance, if you’re attending a balloon festival or watching one launch from your local park. When you think about it, it’s only natural for a dog to be frightened by hot air balloons.”

How to help a dog’s fear of balloons

1. Provide them a safe place

For some dogs, the solution might be that they have a quiet balloon free place to go when celebrations are taking place. That way, your dog can chill in his own space and not be worried about them.

Do make sure that they are well out of hearing distance when you pop the balloons when tidying up.

If your dog is a little apprehensive rather than terrified of the balloons, then this might be a good technique to try.  Counter conditioning means changing your dog’s emotional response to the balloon from one of being scared to one of being excited.

So, you’re now looking for your dog to become excited when he sees the balloon appear because he knows that balloons will equate to great treats coming their way!

This is a technique for dogs who are quite anxious when near balloons. Desensitization means slowly reducing how sensitive your dog is to being around something which causes him to become anxious, in this case, balloons.

The process aims to gradually introduce the balloon, in the least scary way, to give your dog the chance to get used to them until they are no longer bothered by them.

Over several days you can slowly add more and more air into the balloon until it’s fully blown up, and your dog is still nice and calm.

How to tell if your dog is afraid of a balloon

Sometimes our dog’s body language can be very subtle. So that means that unless you know what you’re looking for, you might miss some of the signs that they’re feeling anxious.

If you spot any of these signs when the balloons come out, then the chances are that your faithful friend is telling you that they’re not happy:

Should you seek professional help?

If your dog becomes so scared that they cannot be comforted or there is a risk of injury to you or your dog, then you should speak to your vet.

They can rule out any medical conditions that might cause fear type behaviors to appear and recommend a veterinary behaviorist who will help you manage the situation.

Are balloons bad for dogs?

In short, yes, balloons are bad for dogs. I do not recommend that dogs play with balloons unsupervised. I’ve written an in-depth guide to what happens if a dog eats a piece of popped balloon. Please read that if this has happened with your dog.

There is the obvious risk where your dog might choke on a balloon once its popped. There’s also a very real concern than the small pieces of chewed balloon can get into your dog’s intestinal tract.

If this happens, there is a risk that the small pieces of balloon could cause a blockage. This will require surgery and could even lead to death if not noticed in time.

Based on that, you should not let your dog play with balloons.

Did You Know? One of the strangest things that dogs are scared of is fart noises!

For those dogs who do find balloons scary, then it can be a real problem when children are keen to have the house adorned with balloons for parties and festive occasions.

Dogs who have a more acute sense of hearing may also find the noise of a balloon popping to be more worrying.

If you do have a dog who hates balloons, it might be easier to simply remove any chance of them coming into contact with them, rather than attempting training methods.

Dogs can exhibit some very odd behavior sometimes, but there’s usually a good reason for it. Here are some more examples.