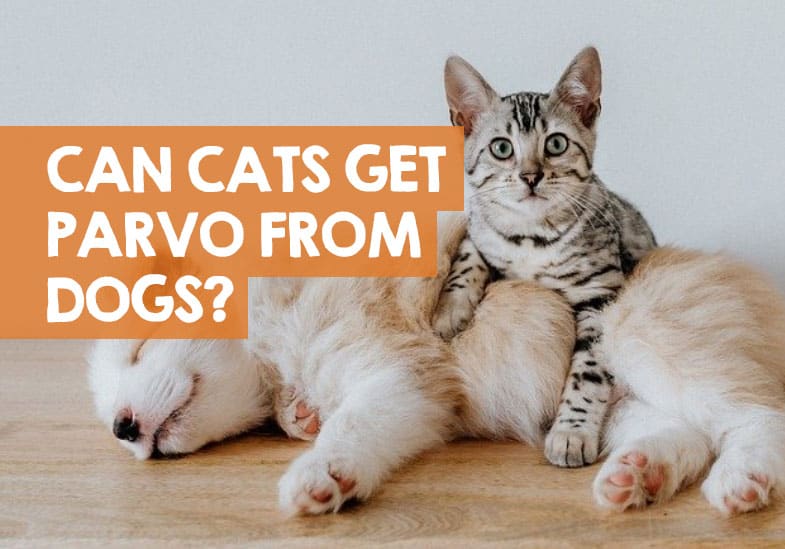 You might be asking the same question as I was, as this is a topic that I recently discussed with a vet. He’d been asked by a pet owner whether it was possible for cats get parvo from dogs?

Unlike many blogs you might have already read, he has a different opinion, but one which is backed up by a 2012 study… and I am going to share some of that knowledge with you today.

Can cats get parvo from dogs? It is possible for cats to get parvo from dogs. According to a 2012 study of canine parvovirus in asymptomatic feline carriers, researchers found that is parvo is contagious from dogs to cats and vice versa. Whilst it’s rare and unlikely, it can happen.

This goes against the popular opinion that has held sway for years, where people didn’t believe that cats can get parvo from a dog. This was based on the view that cats could only get their own version of canine parvovirus, which is called feline infectious enteritis (FIE) or feline panleukopenia virus (FPV).

Whilst this is true in the vast majority of cases, inter-species contagion is rare, the study in 2012 by Clegg et al, proves that canine parvovirus can occasionally infect cats.

So, what exactly is the study and what did it discover about parvo in dogs being contagious to cats. Well, you can read a synopsis for yourself on the ScienceDirect.com website, or skim through my notes and assessment of it below.

Cats can get parvovirus from dogs and here’s the proof

For many years it was assumed that dogs got canine parvovirus and cats got a closely related and similar disease called feline panleukopenia virus (FPV). Over time, new strains of canine parvovirus emerged and mutated, and scientists found it could infect cats’ cells.

However, despite the fact that parvo could infect cat cells in laboratory environment, it was considered that it would not happen in the real-world where dogs and cats co-habit.

This opinion changed in 2012 though, after Simon Clegg and his co-researchers published their study titled “Canine parvovirus in asymptomatic feline carriers”. An abstract from the study is quoted below:

In other words, those are scientists saying that it is possible for ats get parvo from a puppy or a dog.

To come to this conclusion the study involved the following research:

To date this is the only research that I have found that has studied parvo in dogs being contagious to cats. It probably does need further investigation to properly understand what the risks are to the general cat and dog populations.

The bottom line is, parvo is spread from dog to dog almost every time. However, given what we see from this study, it means we should certainly be more careful about cats catching parvo from dogs, and considering it a real possibility rather than being dismissed out of hand.

How to help prevent cats getting parvo from dogs

I am not by any stretch saying that your cat is going to get parvo from a dog that hasn’t been vaccinated or has been recently ill. But, seeing the results of the 2012 study, you should have it in the back of your mind as a possibility, no matter how slim.

Can dogs get parvo from cats?

As you can imagine, the parvo virus will also be contagious in the other direction, with dogs being susceptible to getting parvo from cats too.

However, whilst we now know cats can get canine parvovirus in addition to the more common feline panleukopenia virus, FPV cannot be passed to dogs from cats.

Can dogs get parvo from cat poop?

Canine parvovirus is contagious through feces, so any poop that a dog eats, licks, or sniffs that has the virus is a potential danger.

I own a dog and a cat, and when he was a puppy, he would love to eat cat poop. At the time I was unaware that cat poop could potentially carry canine parvovirus. Based on what I know now, I would have made even more of an effort to stop this nasty habit, as dogs can get parvo from cat poop, albeit being very, very rare.

The study in 2012 is proof that cat poop can carry parvo.

The Worms and Germs blog answers this question so much better than I can, and here’s a quote from their excellent website:

“Cats and dogs don’t tend to mix much in parks or outside, but canine parvovirus is a very tough virus that can survive for a long period of time in the environment.  It’s certainly plausible that cats could be depositing parvo-laden feces in the outdoor environment, and since the virus can survive the outdoor exposure and some dogs are notorious poop-eaters, it’s a route of transmission that can’t be dismissed.”

What are the signs of parvovirus?

If you suspect your cat or dog has parvo, the signs to look out for (according to PetMD.com) are as follows:

Obviously, cats can also get feline panleukopenia virus (FPV) which dogs can’t get. The symptoms of FPV are very similar to parvo. The Cats Protection charity based in the UK, describe FPV symptoms in cats as:

As you can see, the symptoms are very similar to canine parvovirus. So, whilst it is possible for cats to get parvovirus from dogs, if you see the symptoms, it’s more likely going to be FPV in your cat.

This blog post isn’t intended to be scaremongering as the reality is, whilst research found that cats can have canine parvovirus in their system and feces from dogs, the chances of it becoming an epidemic still appear to be slim.

More research certainly needs to be done into it, but the bottom line is, cats can carry parvo, and will have caught it from a dog originally.

To wrap things up, I will leave the last word on dog to cat parvo infections to the 2012 study authors:

“Results suggest that in some circumstances, clinically normal cats may be able to shed canine parvovirus for prolonged periods of time, and raises the possibility that such cats may be important reservoirs for the maintenance of infection in both the cat and the dog population.”

On the topic of parvo, I’ve written a few more related blogs too which dog owners might find helpful (and cats now based on what we know about how contagious it can be).