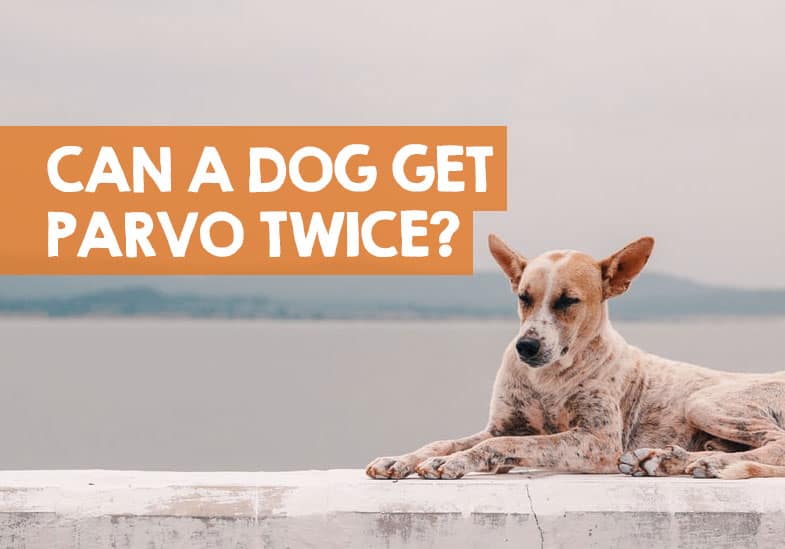 Parvovirus is one of the most contagious diseases that can affect dogs. It’s potentially fatal and requires intensive care and treatment when diagnosed. However, the chance of infection is greatly reduced with vaccination, but even then, your dog is not 100% protected against it.

For the majority of dogs that do survive parvo, owners will quite rightly be worried about their pet getting sick from parvo twice. It’s a nasty disease, and one that takes a toll on dogs, so no wonder there are worries over being reinfected again. But what is the truth?

To find out, I decided to research as much as possible about whether a dog can get parvo more than once. Here’s what I discovered…

Can dogs get parvo twice? It is very unlikely that dogs can get parvo twice in a row or more than once, as they will build up immunity to the disease after an infection. However, there is theory there’s a very small chance a dog could get parvo again due to infection from a different strain mutation.

So, it is highly unlikely a dog can get parvo twice. The reason is down to the antibodies they will have built up in their system after the first infection. It’s the same logic behind how humans get measles, build up resistance to it, and then are unlikely to get it again.

However, this is where things get complex, because canine parvovirus has many different strains. And like any contagious disease and virus, it can evolve and mutate into a slightly different strain.

And that’s how there’s always a small risk that your dog can get parvo more than once. But, as it stands today, I’ve been unable to find any documented evidence online that a dog has been reinfected with parvo more than once, so it appears this is all theory based.

But theory often turns to real life. We only have to look at recent events around the world with the virus that is affected humans in 2020 to see how things can mutate and rapidly spread.

Handy Hint: If you have a puppy recovering from parvo then here’s what to feed them, how much food, and how often.

How to protect against your dog against getting parvo twice

Despite the chances being negligible, you should always assume your dog can get parvo twice, so take care and attention at all times. That means keeping up to date with vaccinations and booster shots. Typically, puppies get their shots in three rounds; 8, 10, and 14 weeks.

As your dog gets older, you can protect them against contracting parvo by ensuring boosters are given 1 year after vaccination and then once every 3 years.

You should also limit your puppy’s exposure to any places where they might be dogs who have been unvaccinated.

Handy Hint: Puppies can catch parvo at the beach, so here’s all you need to know about keeping them safe when out and about at this young age.

How long does immunity last after a getting parvo?

I’ve seen conflicting reports online on how long a dog is immune after getting parvo. Some vet websites are vague stating the dog will be immune for several years, whilst others say immunity can last for 3 years.

Does the vaccination always work?

According to the Dogs Naturally Magazine, the Virbac Disease Watchdog found that 28% of vaccinated puppies and 11% of vaccinated adult dogs still get parvo.

You might think your dog is safe from the disease, but they still might catch it. If they do, it’s a frightening diagnosis for sure, but the Dogs Naturally Magazine say:

“Despite the media scares and warnings from vets, parvo has a survival rate of about 85%. This doesn’t mean 15% of puppies die from parvo – it means that 15% of puppies who are exposed to it – and actually catch it – will die.”

Whilst I cannot find any documented evidence that a dog can get sick from parvo twice, the theory about mutating strains of the virus does make sense. Based on that, you have to come to the conclusion that there is a slim possibility of dogs getting parvo more than once.

It is likely to happen to your dog though?

No. Providing your dog is vaccinated, healthy, and you don’t take any risks, your dog should have the protection he or she needs against this scary disease.