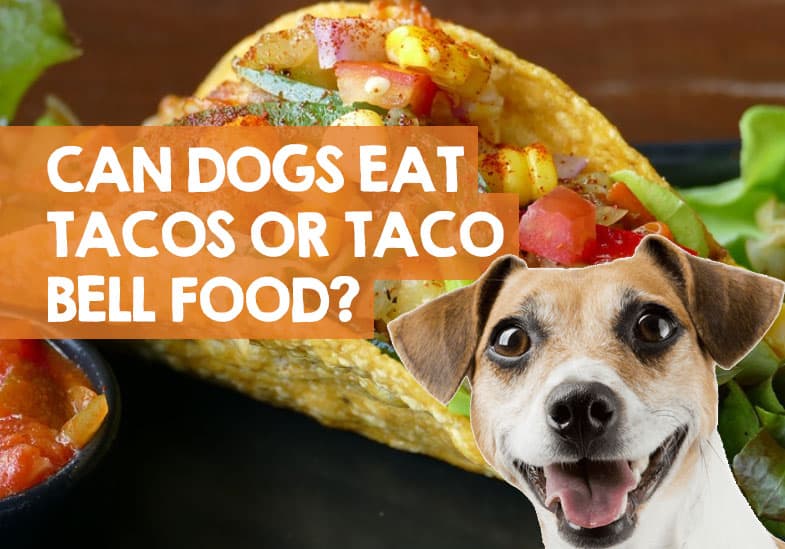 Let me get one thing clear before you read this whole guide; I do not recommend that you let your dog have Taco Bell. You don’t need to be a veterinary expert to realize that fast food is never a great option for a dog’s diet.

However, as a dog owner I totally get why sometimes you will need to know whether dogs can eat Taco Bell. They might have chomped some down by accident or you might be on the road travelling and Taco Bell meat is your only option for feeding your four-legged friend.

To help you out I decided to look at the calorie consequences of the Taco Bell menu for dogs, how dog friendly Taco Bell food is, plus see what ingredients are potentially toxic to your pooch. Here’s the short answer to start with.

Can my dog eat tacos or Taco Bell meat? I do not recommend you let your dog eat tacos. This Mexican food typically contains certain ingredients that are toxic to dogs such as onions. Tacos can also be bad for dogs as they contain cream which can upset dog’s stomachs, plus spicy jalapeño peppers.

The bottom line is; a homemade taco or one you buy at Taco Bell is more likely than not going to give your dog a bad case of the runs, possible vomiting, and the chance of making them feel quite ill.

But what about if about you just let your dog eat the Taco Bell meat? You might think that would okay given you’re removing the other ingredients, but let’s take a closer look.

That may sound reasonable, and you would be forgiven for thinking that it’s okay to just feed your dog the meat part from a Taco Bell, but not so fast. There are some ingredients in that 12% that don’t work too well on a dog’s digestive system.

Based on what I’ve found, dog should not eat Taco Bell meat as it has supplementary ingredients in it that means it’s not 100% beef and could upset your dog’s inner workings.

Admittedly though, your dog would need to eat a lot of taco meat to suffer with anything life threatening as these ingredients are a low percentage. But if you love and care about your dog, it’s not worth giving them an upset stomach with a Taco Bell meal.

Can dogs eat tacos that are homemade?

Of course, if you were to only serve 100% beef in your taco with no fillings, sour cream, onions, guacamole, tomato salsa, jalapeño peppers or tortilla shells, then yes, maybe your dog can eat tacos you’ve made yourself.

But you’re not really going to be left with a taco! It’s just going to be some 100% beef, some lettuce, and some plain rice that hasn’t been seasoned and a little bit of cheese.

Not much of a taco I am sure you will agree!

But what is it about these ingredients I’ve recommended you remove that makes them so bad for a dog’s diet? Well, I’ve already explained about how onion and garlic can be bad for dogs, so let’s focus on the other ingredients to avoid feeding a dog from Taco Bell.

What can I get my dog at Taco Bell that is dog friendly?

Let’s say you’ve got all the way to Taco Bell and realized it’s your only option for feeding your dog. You might wonder if Taco Bell is dog friendly food-wise. I had a look at the menu and dissected it a little to see what you might be able to feed your dog from their offerings.

What can dogs eat at Taco Bell?

To be blunt, I am struggling to find a decent main for my dog from Taco Bell. Burritos have very similar ingredients to tacos, so those are definitely to be avoided.

In fact, almost all the food you can buy at Taco Bell has some form of spicy ingredient or onion and garlic. Based on that, I might stretch to ordering a plain taco for my dog to eat, but with just the meat in it.

Obviously, we know that Taco Bell meat has onion and garlic in it in small quantities, but I’d imagine it would be ok as a one-off emergency meal. But of course, this is only if you have no other options for your dog.

If it’s a side you want, I’d opt for the Taco Bell black beans from the perspective that this is a food that can actually be good for dogs. Black beans are a great source of vitamins and fiber, but… we all know what beans can do to a dog!

There are always the cinnamon twists, but they aren’t a healthy choice. You can imagine how the salt content is too high for a dog if this snack is eaten too regularly.

Did You Know? Whilst Taco Bell do not allow dogs inside their restaurants, Taco Bell is dog friendly outside, letting owners sit with their pets on external patios if they have one.

More reasons why dogs should not eat tacos

I’ve covered off the ingredients in taco and Taco Bell food that are possibly harmful for your dog and not very dog friendly. What I also wanted to cover was the calories in some typical taco recipes too.

Just like us, dogs can get diabetes and health issues due to weight gain, so you need to keep any eye on their daily calories.

Here’s what I found out to help me crunch the numbers:

I then applied that logic to two typical dog breeds, using the weight of an average male.

Now that I know how many calories each dog should be eating it’s possible to apply those numbers to items off the Taco Bell menu.

As you can see, for a small to medium dog breed like a Frenchie, Taco Bell is a large proportion of what they should be eating each day!

What happens if my dog eats a taco?

We’re almost at the end of this journey into dogs eating taco meat. What I’ve not really covered off is what might happen if your dog does eat Taco Bell.

I don’t want to be accused of using scare tactics, so in all honesty, nothing will probably happen to your dog if he eats a taco. 9 times out of 10, he might be perfectly fine, with the possibility of perhaps some runny diarrhea.

But there is always a risk when you let your dog eat food they are not meant to. Signs of sickness in dogs that ate something that disagreed with them include:

If you have any concerns with what your dog has eaten, please seek a vet’s opinion. The content in this guide is purely based on my own opinions as a dog owner, rather than professional veterinarian advice.

I do not recommend you let your dog eat anything from Taco Bell unless you have no other option. And that’s extremely unlikely. You’re responsible for your dog’s health, so keep their diet good, and they should live a much happier and longer life.

I frequently blog about what dogs can and can’t eat. Whilst you now know whether dogs can have tacos or Taco Bell food, what about some other big-name establishments: