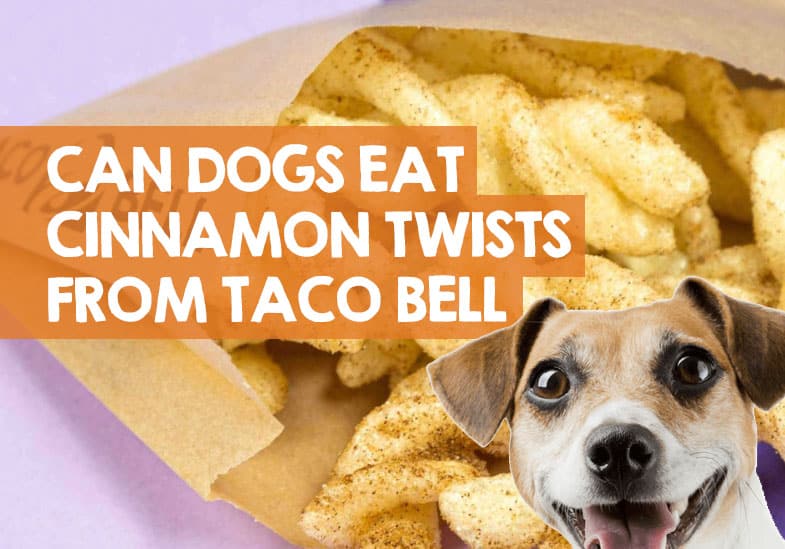 When you’re on the move and the only option you’ve got is fast food, Taco Bell is a great option, particularly those tasty cinnamon twists. That’s great news for you, but what about your dog? Obviously fast food is never a good option for our furry friends, but what are the consequences if your dog eats Taco Bell cinnamon twists.

I decided to create this helpful guide explaining whether dogs can have cinnamon twists from Taco Bell, and what you should avoid doing to keep your dog healthy.

Whilst dogs can have Taco Bell cinnamon twists, whether they should eat them is an entirely different matter, and it all boils down to the ingredients, cooking method, and calories, regarding the suitability of this snack.

The bottom line is this; dogs can eat cinnamon twists from Taco Bell, but I do not advise is due to the potentially harmful ingredients and cooking method.

If we look at the ingredients, they are listed as being:

Are cinnamon twists bad for dogs?

Taco Bell cinnamon twists are bad for dogs to eat as they contain more salt than is recommended for their daily intake. They are also fried, contain sugar, and have a high calorie count!

As a pet owner, there’s a lot of things on the ingredients list further up the page which I would not want my dog to eat, including:

In all honesty, a few cinnamon twists from Taco Bell are not going to poison your dog or lead to long-term health issues. It’s more of a concern when snacking on foods like this that are high in salt and sugar becomes a regular occurrence.

For example, I referenced the salt in the twists and how this can be toxic and harmful to a dog, but they would need to eat a lot of Taco Bell cinnamon twists in one sitting for it to become problematic.

But, even so, there is more sodium in a portion of Taco Bell cinnamon twists that an average sized dog should ideally have in one day. For example, Cuteness.com say:

“Healthy dogs weighing 33 pounds should consume no more than 100 mg of sodium a day, according to the Board on Agriculture and Natural Resources, a division of the U.S. National Academy of Sciences and National Research Council. Some dogs, such as those with heart disease, might require lower amounts of sodium, but your vet can help you find the right amount.”

From what I’ve researched, there is 210 mg of sodium in 1 bag of Taco Bell cinnamon twists. That’s more than double the daily consumption laid out above!

If your dog is taking on this much salt each day, it won’t take long until it develops into a health problem.

Then you need to consider that way in which Taco Bell’s cinnamon twists are made. They are said to be fried to give them that puffed up and crispy texture. Anything that is fried is bad for a dog and can lead to health problems such as heart disease.

Handy Hint: I also looked at other items from the Taco Bell menu to see how suitable they are for dogs. You can read the full breakdown in my notes about dogs eating tacos.

The calorific consequences of cinnamon twists

I also decided to look into how the calories in a bag of Taco Bell cinnamon twists could affect a dog. To do this, I researched how many calories dogs should consume each day, with two common breeds

Based on those calculations, here’s are two popular dog types and how many calories they need each day:

Keep these numbers in mind, as now I want to talk about whether dogs can have cinnamon twists from Taco Bell, with a focus on the calories content in them.

For a smaller dog breed like a Frenchie, eating a couple of servings of cinnamon twists is going to be a large proportion of what should be eaten each day – and far more than the 10% rule.

What does cinnamon do for a dog?

From what I’ve read, there are pros and cons to this ingredient, and to be honest, the volume of it in the Taco Bell product is so low, it’s virtually negligible, but here’s what people are saying.

It can be tempting to give in to those puppy dog eyes and let your dog have a tasty treat from your fast food or take out selection, but you should really draw the line at sweet things like cinnamon twists.

I tend to carry around some dog treats with me, so at least if my family and I do pull into a restaurant or take out place, we can let him have something suitable too.