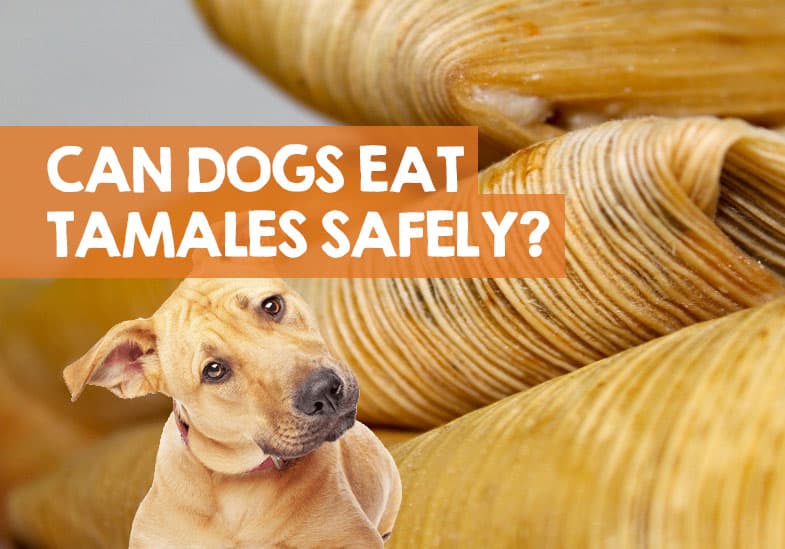 Our family tend to eat tamales during the holiday periods; they always bring back memories of a Mexican vacation we had. Everyone in our family love them, and even our dog Claude looks longingly at the tamales, begging us to let him have a bite.

But, just how safe are tamales for dogs, particularly when you consider the husk rather than the meat inside? I decided to do some research into this snack, including how the beef, canned, cheese, chicken, corn, and pork flavors of tamales might not be a great canine meal.

Can dogs eat tamales? Most tamale mix and meat from inside the tamales should be safe for a dog, but it’s not something I recommend you let them eat if you can help eat. Most corn masa recipes will contain cheese, salsa, and spices which can upset dog’s stomachs. Husks can also present a choking hazard.

Tamales are not designed for dogs and can make them sick. The risk can be reduced if the mixture inside is predominantly meat based, with no cheeses, salsas, onions, garlic and seasoning added.

If you’re making homemade tamales, this is really important because onions and garlic are toxic to dogs, and can make them very, very ill. Many dogs will have dairy allergies too, so cheese should really be avoided.

Plus, being a Mexican dish, it’s tempting to add the spicy flavors into tamales such as jalapenos and peppers. Spicy food can be very harmful to dogs, which is something I’ve talked about before in my guide on why dogs should not eat Takis.

And then there’s the corn husk…

Tamales that are steamed in corn husks rather than being wrapped in a banana leaf can present more of a hazard to your pooch.

It goes without saying that it’s much more preferable that your dog eats the meat inside the tamales, rather than the rough outer husk – and there are good reasons why.

Tamale corn husks won’t be toxic so will not poison your dog or puppy. However, what they definitely are is hard to digest. Just imagine one or parts of a husk sitting in your own stomach or digestive system… nasty stuff eh?

How bad a tamale husk is for your dog will depend on a number of factors including how much corn husk they ate, the sizes of your dog, and how well it was chewed down.

If your dog has eaten a tamale husk, don’t be at all surprised if their body rejects it. I spoke to one dog owner on Facebook when researching this guide whose dog threw up a tamale husk after that had been to a county fair for the day… she didn’t even know her dog had eaten the it off the ground!

If your dog doesn’t puke the husk up, they could experience digestive problems and gas. The husk could be the right size to cause a blockage, so does have the potential to be very serious – you should call your vet if you suspect this is the case.

The signs that your dog has got a corn husk stuck inside them include:

Call your vet immediately if any of this happens.

How the calories in tamales can be bad for your dog

Whilst I’ve established that the bulk of the ingredients inside of a typical tamale is not hugely bad for your dog, I’ve not really discussed the calorie implications… and I think it’s important.

When you consider the following, it makes for an interesting topic of discussion.

What I’ve then done is take two of the most popular dog breeds; French Bulldogs and Labradors. I’ve calculated what their daily calorie intake should be, based on the average weight of each breed.

As we know, all tamales are different. How many calories in them will depend on the recipe, whether they are homemade, store bought, canned and tinned, or from a take-out or restaurant.

So, I have to take a leap of faith a little bit here but did look into the average amount of calories in some of the most popular tamale flavors.

I then crunched the numbers to see how a dog eating one of these typical tamales could impact on their diet and daily calories. Here’s what that looks like:

So, whilst a large dog like a Labrador could eat a tamale and only use up between 12 to 14% of their daily calories, it has a much larger impact on smaller breed. I own a French Bulldog, and if Claude was to eat a pork tamale, that’s 40% of his calories already gone.

You might not think that 40% sounds like a lot, but it is because it goes against the widely adopted 90/10 rule on doggy snacks… in other words, snacks should only account for 10% of your dog’s daily food intake.

I would certainly consider tamales to be a snack, rather than proper or raw dog food which comes with nutritional value.

What about just the meat from inside a tamale?

But what about your dog eating just the meat form inside the tamales, surely that’s ok?

I kind of agree, and it’s certainly a lesser of two evils. But again, it depends on the recipes. If it’s just a meat mix with no seasoning, and minimal cheese, then your dog will probably be okay if it eats pork tamales, chicken tamales, beef tamales, or even a little of the corn masa.

I would not let your dog eat canned tamales, because tinned food tends to have lots of salt and preservatives in, none of which are great for canine digestive systems.

My puppy ate a tamale – what should I do?

If your puppy ate a tamale, keep a close eye on them. Puppies are notorious for having very delicate digestive systems, so anything unusual and rich in flavor will typically induce vomiting and diarrhoea.

Given the age of your puppy and how prone they can be to sickness, I would always consult with a very anytime they eat something they are not meant to.

Whilst we’re on the topic of dogs eating tamales, what about the candy version? You would be surprised at how many people let their dogs eat candy, but it can also happen by accident.

We’ve got a young son as well as our French Bulldog, and our kid will often drop things on the floor, including candy – it’s not always unavoidable, particularly with a quick and greedy dog!

Can dogs eat Hot Tamales candy? No, dogs should not eat hot tamales. They contain sugars and other ingredients that can upset canine stomachs. The hot spicy taste could also burn their throat and insides.

So, should you be worried if your dog eats a hot tamale?

Personally, I would be a little bit concerned, and would recommend calling a vet. Even small amounts of refined sugar fed irregularly could lead to teeth problems, a disrupted metabolism and increase the chances of canine diabetes.

Just look at the ingredients of Hot Tamales below. Are these really things you want your dog to chew on and swallow down?

The bottom line is this; Hot Tamales are bad for dogs and could lead to diarrhoea, vomiting, and even a more serious health condition. Don’t let your puppy or dog eat them at all.

To conclude, I don’t think dogs can have tamales with the husk. A little bit of tamale meat probably won’t do them any hard, just go easy on the cheese, salt, seasoning, spice, and definitely no onion or garlic.

Ask yourself this; why are you letting your dog eat a tamale? For whose benefit is it really? Give your dog the occasional treat by all means, but be very careful, as dogs don’t always react that well to rich foods.

Disclaimer: I am not a vet. The advice in this guide is all down to my own common-sense approach and research I have done online. Always consult with your own vet before feeding strange foods to your dog, or if they eat something they should not.

On the topic of letting your dog eat meals that they really should not, you might also find the following guides of interest: