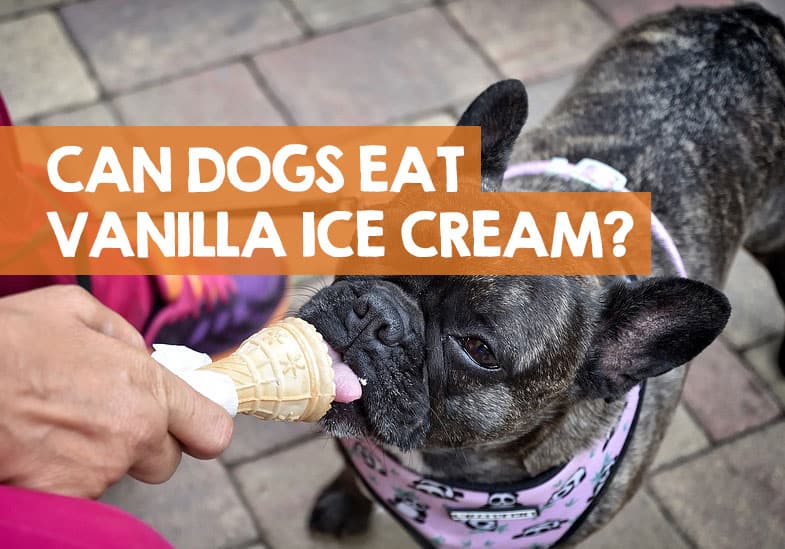 In our house we love vanilla ice cream. The problem is, our dog does too. He looks at us pleadingly whenever it’s taken out of the freezer. And here’s the thing; dogs will eat anything you put in front of them; they really have no filter when it comes to what they chew down on.

That goes for sweet things too like vanilla ice cream cones… drop a scoop on the floor and your dog will gobble it up before you’ve had a chance to pick it up. This is how our dog first ate vanilla ice cream and decided he liked it!

I take the health of my dog very seriously did some research into whether dogs can eat vanilla ice cream safely. Also, if dogs can have vanilla bean ice cream, how much should they be allowed to eat… because obviously it’s not the healthiest of foods.

Here’s what I discovered.

Can Dogs Eat Vanilla Ice Cream? Dogs can eat vanilla ice cream, but it’s not recommended that you let them. Some dogs are lactose intolerant, so vanilla ice cream could trigger sickness. It’s also very high in sugar which will lead to obesity and possible diabetes.

The bottom line; soft serve vanilla bean ice cream is not healthy for dogs and is bad choice to feed them. However, with a little moderation, most dogs could probably have a spoonful on rare occasions and suffer no ill effects. But, please ask your own vet first, the opinion in this post is based on how my own dog reacts to it.

There is a safer alternative for your dog, which is better for them than human ice cream. It’s a specially made powder that you add water to and then freeze. This gives you vanilla ice cream for dogs (view on Amazon) without grain, gluten, or dairy and I believe just small amounts of sugar too.

In short, vanilla ice cream is bad for dogs if they eat it in large quantities. But it can also be bad or toxic for dogs in small amounts. There are certain ingredients in addition to the high sugar and dairy levels which I will address below.

Xylitol is toxic and found in some low sugar brands

For example, some low sugar vanilla ice creams use a sweetener as a substitute for sugar. The sweetener is called xylitol, and this is toxic to dogs.

According the UK Blue Cross charity;

“Xylitol can cause hypoglycaemia (low blood sugar levels) as a dog’s pancreas will confuse it will real sugar, which makes it release more insulin. The insulin then removes the real sugar in the body, leading to plummeting blood sugar levels. Another reaction to xylitol is liver failure and this is even more serious, but it’s not known what causes this to happen.”

They go on to say how there were 250 reported cases of xylitol poisoning in dogs in 2016, with one pup actually dying. Most of these were due to the dog eating chewing gum with xylitol in, but it still makes for scary reading given that this ingredient can also be found in some vanilla ice cream brands.

Admittedly, your dog would need to eat a lot of vanilla ice cream to feel this toxic effect, but it’s enough of a concern to warrant you being very cautious.

Another reason why vanilla ice cream is bad for dogs is the high sugar content. It’s common knowledge about how sugar is bad for the human system, but the same applies for dogs with side effects including:

Similar to what we experience, dogs can suffer a sugar low after the high, causing dogs to become sleepy, lethargic, moody, and irritable. They will also crave more, and for owners it’s not always easy to say no.

Some dogs are lactose intolerant

Since one of the largest ingredients is milk, letting your dog eat vanilla ice cream could lead to gas, bloating, constipation, diarrhea, or vomiting. Some dogs simply don’t have the stomach to handle dairy products.

“Dairy products are a leading source of food intolerance in dogs, and many canines are lactose intolerant, which means they have difficulty digesting milk. Some lactose intolerant dogs have trouble drinking milk but can handle dairy products like cheese and plain yogurt, which are typically easier to digest than straight milk. Others have adverse reactions to dairy in general.” (view source)

Young puppies in particular have weak stomachs and won’t be unusual to see them being quite sick after eating vanilla ice cream.

Some dogs can also develop allergies after eating dairy products.

While not a major danger if given in small amounts as a treat, for dogs with obesity, diabetes, allergies, or dairy intolerance, vanilla ice cream could be a big problem.

Based on what we know about the ingredients and calories in vanilla ice cream (listed below), then vanilla bean ice cream could never be considered good for dogs.

Let’s look at those ingredients and calories in a little more detail, with some of the leading brands of vanilla ice cream.

There’s a lot in there which I would not want my dog to eat, in particular the artificial ingredients.

When you look at the calories of ice cream too, just a small portion could account for a large percentage of your dog’s recommended daily intake.

Vets recommend that a dog’s daily diet should be restricted to 25 calories for every pound in weight they weigh. They also recommend that dogs only have 10% of their diet set aside for treats – this is the commonly followed 90/10 rule for food.

To understand how bad a dog eating vanilla ice cream regularly could be, I researched the weight averages of two of the country’s most popular dog breeds; French Bulldogs and Labradors.

This let me calculate how many calories each dog should be allowed to eat each day, and how vanilla soft serve ice cream could have an effect on that.

I then looked at some of the most popular vanilla ice cream products and how many calories were in a serving to work out the percentage of each dog’s daily intake this would mean.

Whilst the calorie content doesn’t look that big for a larger dog breed like a Labrador, the results are scary for smaller to medium sized dogs.

Is McDonald’s ice cream safe for my dog?

My advice for this brand is the same as with any ice cream, but probably more cautious because a lot of the soft serve at McDonald’s comes with chocolate, which is a toxic ingredient for canines.

To find out more, read my advice on dogs eating McDonald’s ice cream.

How much vanilla ice cream can a dog have?

If you are still determined to let your dog eat vanilla ice cream, then how much you feed them is the next consideration. If it were me, I’d let them have nothing more than a small spoonful on a hot day, and then monitor their reaction for 24 hours.

With dogs that don’t show any ill effect from eating vanilla bean ice cream, I’d then make this spoonful serving an irregular treat, no more than once a week at most.

Dogs with sensitive stomachs will react badly to eating vanilla bean ice cream, and will typically have symptoms such as retching, vomiting, and diarrhea. I would describe this as a mild stomach upset, and you might be able to treat it yourself.

Here’s what we do when our dog is sick:

This process has also worked for our dog.

However, if you see more serious signs such as dehydration, painful and hard swollen belly, blood in vomit or feces, and lethargy, please do contact a vet immediately.

But, as with anything of this nature, I always recommend that you consult with your vet if your dog eat something they shouldn’t have. I am not a vet, and the content in this guide should not be construed as professional advice, just my own personal experiences shared.

Most dogs are fine with a little treat here and there, so the key is to exercise common sense and restraint. Our own dog laps up vanilla bean ice cream when my son drops it on the kitchen floor, and we’re fun with that because he hasn’t been ill.

But if my dog was to eat a bowl of vanilla ice cream, I don’t think it would lead to pleasant results (as you can probably imagine)!

Moderation is key, as is monitoring how your dog reacts to certain foods.

I regularly blog about what dogs can and cannot eat, with some human foods (and random items) being more poisonous or dangerous than others, such as: