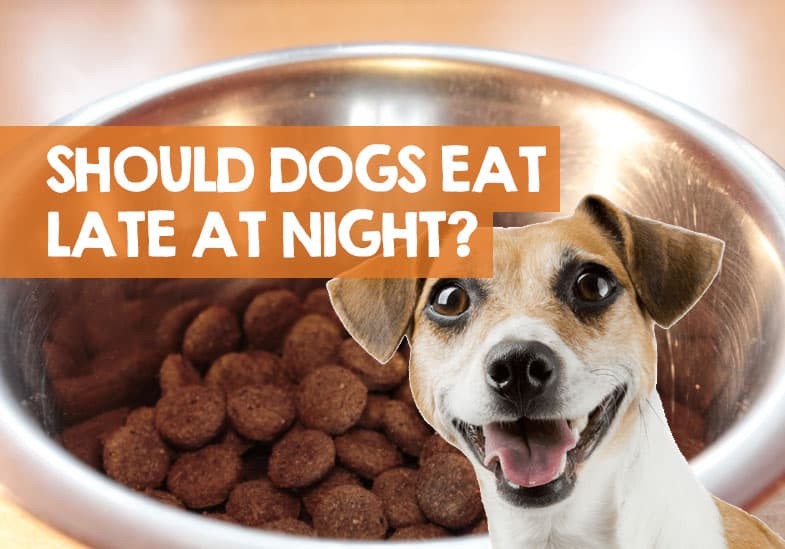 Many people feed their dogs late at night. It can be for a number of reasons; forgetfulness, work commitments, or simply that you have a dog who isn’t hungry before bedtime. But I don’t think you should be letting your dog eat late at night, and let me explain why…

Is it bad for dogs to eat late at night or before bed? Yes, it is bad to feed a dog late at night, and there is scientific evidence to suggest it could possibly lead to unhealthy weight gain. Dogs that eat before bed will also have more energy to burn and will need night-time toilet trips, which can make their owner’s lives trickier.

That’s the short answer, but I wanted to also share with you some interesting research that shows how the circadian timing of food intake can contribute to weight gain in animals.

Below you can find out what the circadian rhythm means, plus read more reasons on why it’s bad for dogs to eat before bed.

Is it bad to feed a dog before bed?

I believe there are 5 main reasons why it’s a bad idea to feed your dog late at night, all outlined here:

1. Your dog will possibly gain weight

Eating late at night can possibly lead to your dog putting on weight. Don’t just take my word for it though; there’s scientific research to back this claim up, much of which has been collated in this report quoted below:

“A number of recent studies in animals linking energy regulation and the circadian clock at the molecular, physiological, and behavioral levels raise the possibility that the timing of food intake itself may play a significant role in weight gain.”

Circadian rhythm is the body’s 24-hour cycle that tells you when to sleep, eat, and wake up. It’s believed to be based on light and dark hours:

“Circadian rhythms are physical, mental, and behavioral changes that follow a daily cycle. They respond primarily to light and darkness in an organism’s environment. Sleeping at night and being awake during the day is an example of a light-related circadian rhythm.” (view source)

In simple terms it means a dog’s body believes daylight hours are for eating, night-time hours are for sleeping. By eating late at night, it’s believed the natural pattern is disrupted, possibly leading to weight gain as the dog’s body won’t process food in the same efficient manner it would during the day.

The studies I reference above back this claim up. One piece of research found that mice fed outside of their normal circadian rhythm gained more weight than mice fed in their body clock’s normal routine.

Whilst there has been no similar study conducted on dogs, we can assume that there could be implications for canines too where late night eating becomes habitual.

2. Your dog will become tired and lethargic during the day

If you aren’t feeding your dog until late at night, they could be waiting a long between meals, given that most dogs eat twice a day. This means there’s a long time to wait from breakfast until the meal you’re giving them before bed.

As a result, your dog could be extremely tired and lethargic in the day, not having the energy to enjoy walks and play with you.

3. Your dog will have excess energy to burn in the night

When you dog eats food, all that goodness in the protein is converted to energy. It’s energy that your dog would normally be able to burn off during the day when running around and going for a walk.

If your dog is being fed before bed, perhaps due to begging, all those calories are being loaded into his system with him not having his usual opportunities to use them up in play and exercise.

As a general rule of thumb, it’s not okay to feed a dog a couple of hours before bed, unless they will be getting exercise in the next couple of hours. Even then, you should really be waiting two hours before walking your dog after eating, to reduce the risk of twisted gut.

If you do feed your dog late at night, there’s every chance he will be up and about during the night and won’t be able to get to sleep – possibly even keeping you up in the process!

If he then has a disrupted sleep, he could be really tired in the morning, and not have the same inclination to want to go for a morning walk with you if that’s what your routine dictates.

4. Your dog will need toilet breaks in the night

Depending on how your home is set-up, you could have to sacrifice your own sleep if feeding your dog late at night due to them needing to poop and pee.

If they don’t have a dog flap or access to an outdoor area, there’s every chance they will wake you up on the night, meaning you don’t the rest you need either.

5. Your dog’s risk of heart disease could increase

This one is a possible leap of faith, but I found some research that said people who eat late are at a higher risk of heart disease. The reason being is that blood pressure rises and falls during the day but tends to be lower at night.

A synopsis of the research concluded that:

“Research suggests that late-night meals significantly impacts your blood pressure overnight, keeping your body in high alert mode instead of going into relaxation. If your blood pressure remains at an elevated level, this increases your risk of heart disease and heart attacks.” (view source)

Whilst this research relates to humans, I see no reason why it can’t also serve as a warning why It could be bad for dogs to eat before bed.

How late can my dog eat at night?

My recommendation is feed your dog at least 3 hours before he goes to bed. This is as late as a dog should really be eating, as it gives them time to burn off the excess energy.

Three hours also takes you past the recommended 2 hour window for not exercising straight after a meal as I explain for these reasons.

What is the latest time you should feed a puppy?

Puppies should be eating three times a day; breakfast, lunch, and an evening meal. However, given how much energy puppies have, it makes sense to give yourself as much time as possible for toilet and play after they eat.

Based on that, I would recommend the three-hour rule again as the latest time you should feed a puppy. Then make sure you take them outside for the toilet and have some play with them indoor before bedtime.

My dog wants to eat in the middle of the night

If your dog wakes you up in the night due to hunger, it could be that you’re not feeding them enough with their bedtime meal. Whilst I don’t advocate feeding them too late at night, you could give them some snacks before bedtime to get them through the next 10 hours or so.

The problem with dogs that want to eat in the middle night is that they can quickly form behavioral patterns if you get up to feed them… it needs to be stopped quickly before it become regularly problematic.

Why is my dog only eating at night?

It’s simple; it’s because you are letting your dog eat in the middle of the night and have probably given in on a few occasions, meaning the habit is now normalized. To get your dog eating during normal day time hours you should:

Is it ok for dogs to sleep after eating?

On a similar subject, what about if your dog wants to go to sleep after eating, and can that be bad for them? Apparently not… according to Care.com, it actually important to let sleeping dogs lie;

“Giving a puppy some down time after a feeding helps to eliminate digestive disturbances, such as gastric bloat or torsion. If your puppy is energetic after feedings, keep the house as calm as possible. Tell the kids your puppy needs a half hour nap time.”

This statement reminds me of when my son was young. Human babies always have a sleep after food so why won’t dogs be the same. I know I feel like lying down on the couch after a big meal!

Handy Hint: Have you ever noticed your dog breathing quickly through their nose whilst sleeping? I published a guide explaining what this means and when to worry.

The bottom line is that from a physiological perspective, calories don’t count for more at night. It’s not like they double up! However, there is some evidence to suggest that dog’s bodies don’t deal with them same – meaning it can be bad for dogs to eat late at night.

And not only that… if you load your dog up with food before bedtime, he’s going to be ramped up with energy as night falls. Plus, he’s going to need to go outdoors!

Do you really want this kind of hassle on your hands and should dogs eat late at night?

The next time you think it might be ok to let your dog eat when it’s time for bed, I’d probably think again… or prepare yourself for a disturbed night!