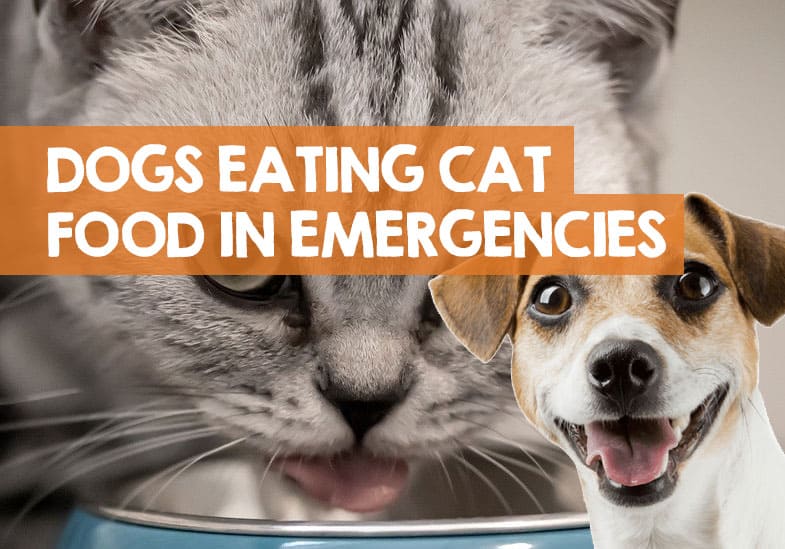 Have you ever been in a situation where you’ve run out of dog food and have nothing suitable to feed the poor pooch… aside from the cat’s food? This happened to me last week. It was a national holiday, and the local store was closed, and I’d not thought ahead.

In the end, I let my dog have cat food, but not before I researched whether it was ok to let him eat it in an emergency. Here’s what I discovered before doing though.

Is it ok to feed dog’s cat food in emergencies?

We’ve all done it. Sometimes it is easy for pet owners to forget that they have a hungry dog waiting for them at home. Or, like me, that they need to pick up dog food on their return before all the stores close.

This is precisely why, amid unforeseen circumstances, it can be tempting to give our dogs cat food in an emergency like this as an alternative to their normal meal.

Firstly, cat food looks similar to dog food and contains meat together with other products that our dogs enjoy eating. Secondly, it is not uncommon to find our furry friends trying to sneak and steal it from their feline counterparts, indicating that they enjoy the taste.

One look into the eyes of our beloved canine can often be enough for us to discount our worries and dish it into their bowls without any hesitation.

However, could this be the wrong decision to make? Is cat food harmful to dogs, or can you let dogs eat cat food in an emergency?

Dog food vs cat food – how are they different?

As mentioned above, dog and cat foods are very similar in appearance. However, below the surface, they differ enormously. To better understand this, it is worth looking at the different dietary requirements cats and dogs need to stay healthy.

Although both canines and felines belong to the same order of species (Carnivora), it is only cats that are obligate carnivores.

Essentially, this means that, unlike dogs, cats must have a diet rich in meat and protein to avoid suffering from several serious health issues – they are true carnivores, unlike our slobbery companions.

Due to this dietary requirement, cat food always contains extremely high amounts of protein. Interestingly, many dogs are obsessed with cat food because of this very reason, often stealing feline food whenever they have the opportunity.

To dogs, cat food is very appealing, having much in common with meaty treats and other food items that are rarely given to them by their owners.

Cats also differ from dogs in the way that they require significant amounts of vitamin A in their diets. Unlike cats, dogs create this vitamin in their bodies, through the conversion of beta carotene, an antioxidant found in many vegetables and fruits.

Without vitamin A, cats will quickly develop problems with their eyes, skin, and other tissues. Thankfully, this problem is rarely present in canines and most dog foods contain this vitamin A, anyway.

In comparison to cats, dogs have more in common with omnivores, meaning that they can consume a more varied diet – ranging from meats, fruits, vegetables, and other edible foods.

This may come as a shock to many dog lovers who have grown up believing that dogs are solely carnivorous by nature. However, it is easy to see a dog’s omnivorous nature by paying close attention whenever they go outside or on walks.

For example, our dogs will regularly eat grass or leaves after a quick roll around, a behavior that a cat is unlikely to do.

When looking at dog food, you will find that many of the ingredients contained are the same as in cat food. However, one major difference is the amounts used in the former.

As previously mentioned, cats require a diet high in proteins (as well as fats, minerals, and vitamins).

However, in comparison, dogs can make do with much smaller volumes, making high amounts of these components unnecessary or downright unhealthy for them.

Likewise, dog foods also commonly contain ingredients that are unsuitable or dangerous for cats, such as vegetables and other leafy greens.

Will cat food hurt a dog?

Now that you understand the difference between these two specific foods, you might be wondering if it is okay to give your dog the latter in an emergency and whether cat food will hurt a dog.

To answer that question rather bluntly; yes, feeding your dog cat food in emergencies and other rare situations is usually nothing to worry about and will not result in your pooch keeling over – here’s an idea of what could happen.

Most dogs are hardy creatures and a slight change to their normal meal will not negatively affect them. For example, if you can only feed your dog once in a day, for one day only it won’t harm them.

However, there are some things to keep in mind if you want to make sure that your pooch does not become ill or experience a bad reaction from a change in their diet.

Similarly, it is important to remember to check the ingredients and research them online before giving your dog some cat food in an emergency. It is also worth mentioning that cat food should never be used as a substitute if dog food is easily purchasable.

Unfortunately, for some owners, it can be tempting to give in to laziness after a long day and opt to feed their dog some cat food or tuna instead of visiting a store. Although it rarely causes complications, cat food is not manufactured with dogs in mind, and as such should only be given to them when there is no other option available. Later on, we will discuss some alternative foods you can give your pooch instead.

In some instances, cat food can cause dogs intestinal troubles resulting in bouts of diarrhea and vomiting. Unlike cats, dogs are not built to digest large amounts of protein and this can sometimes wreak havoc in their guts.

Therefore, it is better to avoid giving them this if your dog has a delicate stomach, Irritable Bowel Syndrome, or other related conditions.

Similarly, your dog’s kidneys and liver are not designed to handle cat food so feeding your dog cat food regularly can hamper their ability to function correctly.

Although it is unlikely to do any permanent damage, even one tin of cat food can present a challenge for your pooch’s kidneys. Dogs fed this as a normal part of their diet are also at a higher risk of obesity, with the high number of calories and protein contained in cat food often causing them to pile on the pounds.

In the worst-case scenario, dogs can develop pancreatitis from eating feline intended food.

However, this is very rare and usually only develops in dogs who have a long history of consuming this product.

That being said, if you notice your dog is displaying symptoms of pancreatitis, such as arching its back, loss of appetite, repeated bouts of vomiting and diarrhea, weakness, and lethargy, you must take them to the vet as soon as possible.

Handy Hint: I don’t recommend putting a cat flea collar on a small dog as it could be dangerous.

What alternatives to cat food are there?

Thankfully, there are myriad alternatives to cat food, many of which you will probably be able to find in your kitchen in an emergency.

For example, cooked plain white rice is one such alternative that is incredibly versatile. Popular with owners whose dogs are prone to stomach issues, plain rice can be combined with other small amounts of cooked foods such as chicken, eggs, and turkey to create a meal that is a much healthier option than cat food.

In much the same vein, pasta can also be used to create delicious meals for your canine when the stores are closed. However, remember to allow hot food time to cool before placing it on the floor for your pooch.

If you have no pasta or rice, you can try experimenting with combining other healthy types of foods. Striving to reach a good nutritional balance, you can mix foods such as cooked, white or sweet potatoes, cooked lean meats (chicken, turkey, and beef), fruits (bananas, strawberries, blueberries), and raw or cooked vegetable such as carrots, broccoli, celery, green beans, brussels sprouts, and corn.

If your dog is a fussy eater, you could try adding broth to savory meals to entice them. After some encouragement, most dogs should eventually tuck in.

Additionally, combining low-fat yogurts with assorted fruits can be a fun treat for dogs who have a sweet tooth.

Handy Hint: Does your dog like to eat cat poop from the litter tray?

No matter how prepared we are to deal with emergencies, they often take us by surprise. From common scenarios such as family disputes, medical emergencies, and car trouble, to rarer scenarios like natural disasters, vehicular accidents, and crime.

As a result, it’s not uncommon for dog owners to find themselves held up at work or caught up in a situation that requires their immediate focus.

Additionally, national holidays are notorious for cropping up when people least expect them, occasionally making the purchasing of dog food an almost impossible task.

Across the US, numerous people are still caught out by this every year (especially older citizens), leaving them with very limited options of what to feed their dog.

The bottom line is, that if it’s an emergency and you have no other suitable options, then you can feed your dog a pouch of dog food – just don’t make it a regular habit.