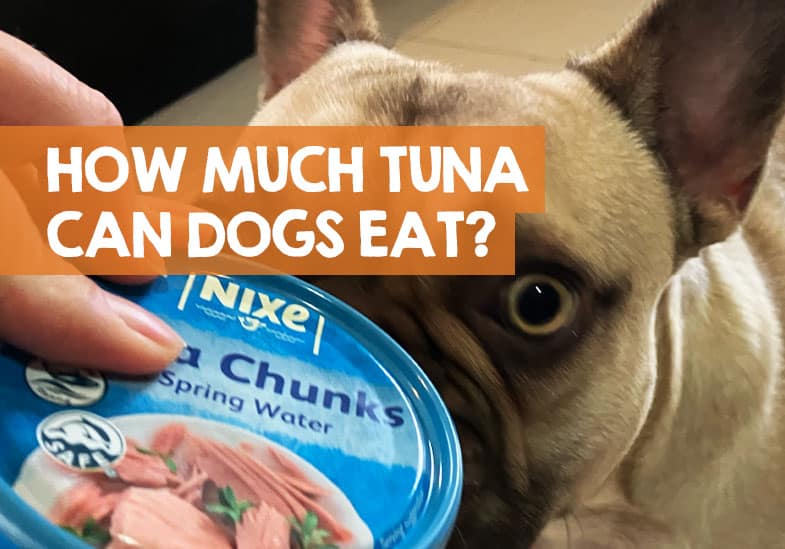 Some dogs are fussy eaters, and owners will try all sorts of different food on them. Other owners simply like to mix things up, and give their dog a balanced diet, which can often include fish.

Given that tuna is one of the most popular canned varieties, here’s a guide to how much tuna you should give your dog, if indeed you choose to do it… here’s the short answer first.

I believe that the amount of tuna you give your dog should actually be none at all. That goes against most pet bloggers who would say, as the common thought is that moderation is key when deciding how much tuna to give a dog, but let me explain why…

Whilst a small amount of canned tuna can be given to a dog, feeding it to them in large quantities, or regularly is a no-no. In fact, I’d go so far to say don’t even give your dog a small amount of tuna because there are health risks which I will explain below.

Is tuna toxic to dogs?

Whilst a little canned tuna will not poison your dog, it can indeed be toxic when a regular part of their diet. The side effects can include mercury poisoning. Some canned tuna also comes with not very dog-friendly additives such as salts, seasoning, and onion.

There’s also the oils and fats that come in tuna which can make your dog sick.

But some people will still want to give their dog a small amount of tuna, so if that sounds like you, read on.

How much tuna fish can I feed my dog?

Your dog should only be fed a small piece of tuna – like a spoonful. And most importantly, they shouldn’t eat tuna every day. So, a spoonful of tuna daily is still a no-no. Their tuna consumption should be occasional.

It’s hard though, because it’s no secret that almost all dogs are obsessed with tuna once they get a taste for it.

If you’re a tuna lover, you’ve probably seen your dog go nuts while watching you prepare this delicacy. We don’t blame them, though. Many of us find this pantry staple, aka “the chicken of the sea” incredibly delicious.

And here’s the thing, there could be some potential health benefits in feeding your dog tuna.

For example, this protein-rich fish has Omega 3 fatty acids that keep your dog’s heart, eyes, and coat healthy. The high protein content is good for your dog’s muscles.

The many vitamins and minerals in tuna (vitamins B, C, D, iron, and zinc, among many others) boost your furry friend’s immunity, so could help with their brain, and bone development, and all that good stuff! The list of tuna’s health benefits is long.

Whether you’re looking to spice up your canine pal’s diet with tuna, or want to share the excess tuna sitting in your fridge, you might wonder how many chunks to serve your dog.

Well, the safest amount of tuna to feed your dog is a spoonful. If they eat excess, they may get an upset stomach. But that’s just the simple reason.

The real reason why you shouldn’t be too generous with the tuna portions is quite complicated — I’ll get to this shortly.

Plus, your dog shouldn’t consume tuna every day. As much as all they should eat is a spoonful, it doesn’t mean they should have that small piece of tuna in their bowl daily.

They should only have it as a special treat, let’s say once or twice a week.

When it comes to puppies, most experts don’t recommend giving them tuna at all. Our little furry friends should stick to their specialized puppy diet. And given their sensitive bodies, feeding them tuna isn’t the wisest idea.

Here are two main reasons why you need to keep your canine pal’s tuna portion small and not feed them regularly:

As you’re aware, there’s a lot of pollution going on in our water bodies because of industrial activities. The mercury emissions from all these activities make their way into the water, where tunas and other fish species live.

This poison often seeps into the fish’s body gradually. And the bigger the fish, the more mercury they’ll have in their body.

Now, tunas are big (compared to other edible fish species). They also feed on other smaller fish in the water, like sardines (which also have a bit of mercury).

Going by this fact, it’s correct to say that tunas have more mercury because of the double exposure.

And the mercury doesn’t magically disappear once the tuna is out of the water and onto the supermarket shelf. It remains in the tuna.

So, if your dog eats lots of tuna, the mercury will slowly build up in their body over time. They could eventually suffer from mercury poisoning, which occurs when dogs get exposed to this metal for a prolonged period.

This is why people say tuna is toxic to dogs, or can at least make them sick.

This poisoning is as deadly as it sounds since it damages your dog’s kidneys, heart, and nervous system. The most common symptoms are:

The last thing you’d want is your dog getting mercury toxicity from consuming something as seemingly harmless as tuna. So, don’t go overboard with the portions.

When you keep the quantity under control, you won’t have to worry about mercury poisoning happening in the long run.

This poisoning risk is the main reason why most reputable commercial fish-based dog foods contain fish species that have little traces of mercury — for example, herring, salmon, and whitefish. Not tuna.

When getting tuna for your dog, go for the smaller-sized type like skipjack and albacore. Their mercury levels are much lower than large-sized tuna species such as yellowfin and bluefin.

As you may recall from your biology class, some fish species live in fresh waters. Others do well in saltwater environments. Tunas fall under the latter.

Since they spend their entire life in saltwater, they have a much higher sodium content. Of course, it’s not the kind of saltiness that can make you scrunch up your face when eating.

But when feeding your dog many chunks of tuna regularly, they risk developing hypernatremia, a serious illness caused by too much sodium in the blood.

Rest assured; a little tuna occasionally can’t cause any hypernatremia.

How much canned tuna can I give my dog?

If you often stock up canned tuna and wonder whether you can share some of it with your canine friend, you can – but I don’t.

Yes, dogs enjoy tuna in every shape and form, so canned tuna will certainly hit the right spot. But not all canned tuna is safe for your dog.

If you’re planning on feeding your dog the canned version, take note of these two things:

The good thing about this tuna is that it’s been pre-cooked. Your dog can eat it straight out of the tin. Again, be mindful of the portion.  Or you can warm it up to unleash the flavor.

While it’s common for some dog parents to throw their canine friends a piece of raw fresh tuna, this isn’t a great idea.

It’s never advisable to feed your dog any kind of raw meat, and fresh tuna is no exception.

To avoid all these health problems, always serve your dog cooked fresh tuna.

Speaking of cooking, you shouldn’t add salt, marinades, or oil to your dog’s tuna. These ingredients will only cause unavoidable health issues.

Another reason why you should steer clear of raw tuna is that it has a certain enzyme (thiaminase) that makes vitamin B in your dog’s body inactive.

Your furry friend gets vitamin B from several foods, including tuna, and their diet. This vitamin helps their nervous system function well. If it’s inactive, your dog’s health will be badly affected.

Cooking tuna gets rid of this enzyme.

If it’s your first time feeding your dog tuna, serve them a tiny amount (less than a spoonful) and pay attention to how they behave hours later. That way, you’ll know whether or not your canine friend has a tuna allergy.

Is it okay to give dogs canned tuna?

Yes, you can. But it should be canned tuna packed in water, not oil or any other preservative. Plus, the canned tuna shouldn’t have any added salt.

What happens when a dog eats too much tuna?

If a dog consumes too much tuna, they will likely suffer an upset stomach. And if they often have large tuna portions regularly, they risk getting mercury poisoning and hypernatremia.

As you can gather, I don’t think you should give any amount of tuna to a dog to eat… but I sure had fun taking the photos of my dogs with the canned tuna… and don’t worry, I gave them a treat instead so not to tease them too much!