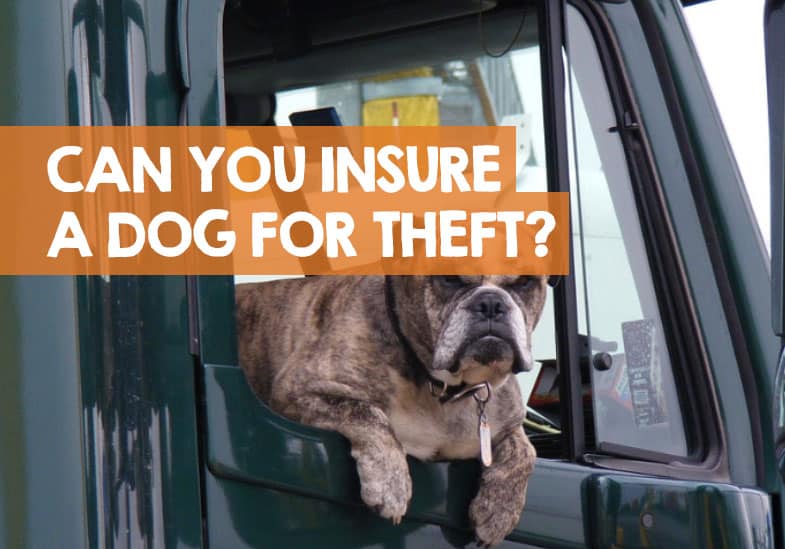 Dog theft is unfortunately on the increase, with recent research in the UK putting the numbers as high as 60 dogs being stolen each week according to data taken from local police authorities. With over 50% of households being pet owners, it could affect you and your family.

Aside from the heartache involved with your dog being taken, it could also have financial implications too. I asked an insurance expert I know whether it’s possible to insure a dog for theft and against being stolen? Here’s what they said:

Can you insure your dog against theft? You can insure a dog for theft, and pet policies will include this as standard or as optional cover. Dog theft insurance can include money to help with advertising for the return of your dog, reward cover, and payment to act as consolidation for your loss if the dog is not returned safely.

How many dogs are stolen in the UK each year?

The Blue Cross animal charity recently published research into stolen dogs and found that thefts were on the rise, despite increased awareness of the crime.

They submitted freedom of information requests to police forces around the UK and found that dog thefts were reported historically as:

But isn’t actually a true reflection on what’s happening around the country.

In fact, the Stolen and Missing Pet Alliance believe it’s far more common than the police data suggests, with more than 60 dogs being stolen daily.

That’s an increase of 24% over the last three years.

Handy Hint: I recently wrote a new article with updated theft statistics on how many dogs get stolen each year.

What is the best dog theft insurance for stolen dogs?

There are various websites which let you compare the various dog theft insurance policies, many of which come with stolen dog insurance cover as standard.

It’s important to select not just a policy that gives you the peace of mind in knowing you have adequate coverage, but also one which suits you and your pet.

As an example, a report from 2014 showed that of 280 of the most popular dog insurance policies in the UK, just 72% of them provided money to help owners advertise their lost or stolen dog and offer a reward.

The same study also showed that just 60% of dog insurance policies have dog loss and theft coverage as part of the standard policy, rather than as a payable extra.

That’s why it’ so important to have the right cover, as on average the insurance policies that do offer advertising costs can payout up to £500.

There are even policies that will increase that advertising cover to up to £1,000.

You can also get insured for pay outs regarding consolation of a lost pet, and money to replace the value of your dog should it not be found.

Why do dogs get stolen?

Dogs get stolen for a variety of reasons. Sometimes it can be an opportunistic crime, but in many cases, dogs will even be stolen to order.

Just some of the media reports over the last decade have noted the following reasons for dog theft, some of which are more common than others.

How to stop someone stealing your dog

It doesn’t matter what type or breed of dog you own; they are all at risk of being stolen due to the wide range of reasons I have listed above.

As a dog owner you should be aware of the risks and take preventative action to ensure it doesn’t happen to you and your pet.

Those most common scenarios where dogs get stolen according to the Pet Theft Census are:

Ways in which you can keep your dog safe from theft

Ways in which you can help protect yourself against dog theft include:

The law on microchipping

Microchipping your dog became compulsory in the UK in April of 2016. This should mean that it’s a lot easier to return lost and stolen dogs to their owners.

Unfortunately, the law currently doesn’t extend as far to requesting vets and welfare authorities actually scan lost dogs when they come into their care.

Even if your dog is microchipped and found, it might not make a difference, particularly given that there are ten different approved microchip databases that don’t share data.

I believe this should change.

What are the most stolen dog breeds?

Many thieves in the UK will steal pedigree and expensive breeds to order. For the criminals it’s money-making exercise, as they know that certain dog breeds will fetch more on the resale market.

Below you can see an interesting graphic developed by the Direct Line insurance company which shows what the most-stolen dog breeds were in 2017. 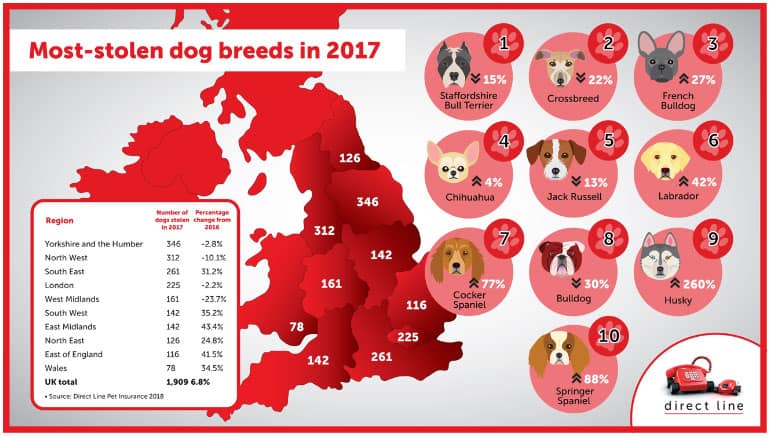 If you own a dog who falls into any of the categories shown above, it’s certainly food for thought in making sure you have the right type of dog insurance in place.

Steps to take if your dog does get stolen

If you dog does get stolen, there are steps you can take to help increase the chances of a safe return.

Without dog theft insurance cover, you could have to spend in excess of £1,000 to successfully find and return your stolen dog.

The sooner you inform your insurance company, the sooner you can help and support in paying for the expenses you might incur in finding your lost dog.