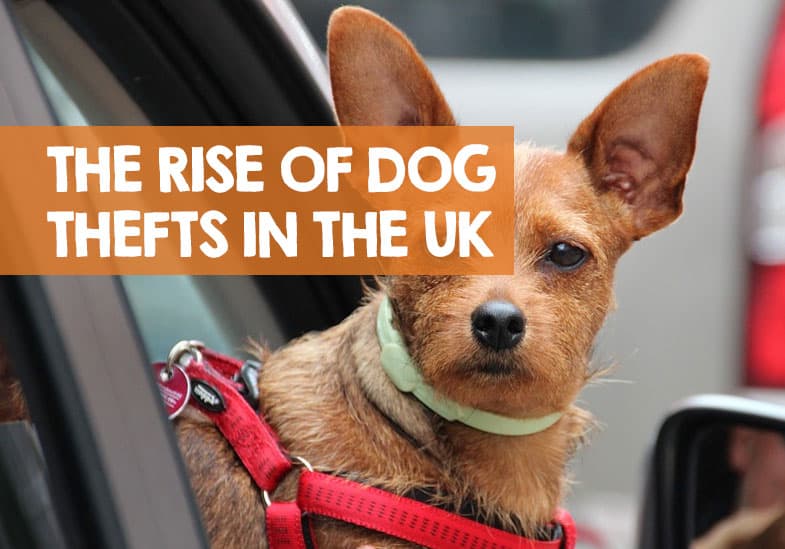 Dog ownership has increased over the last 12 months, as has demand for new puppies. An unfortunate by-product of this has been an increase in dogs being kidnapped and stolen in the UK.

I had heard that a lot of dogs get stolen in the UK each year but wanted to get into the statistics and see how many the reality was. Here’s what I discovered.

How many dogs get kidnapped and stolen in the UK?

Unfortunately, dog theft in the UK has undergone a major increase in recent years. According to experts, this upwards trend has been made worse by the global pandemic, with dog theft going up by a staggering 250% since restrictions were first put in place in 2020.

Naturally, this has put many dog owners on edge, with daylight robberies and brazen attempts to kidnap dogs seemingly being commonplace in many towns and cities.

However, despite these alarming reports and data, is there a significant risk that your dog will be stolen in 2021? Or is the wave of dog kidnappings finally over?

In this guide I will explore how many dogs are being stolen every year, as well as answer any related questions on this topic, such as why dogs are stolen so often, and how you can prevent your pooch from being snatched.

With this information in mind, you will find it much easier to keep your dog safe whilst out walking and at home.

How many dogs are stolen per year in the UK?

Up until 2018, the number of stolen dogs reported was rising quite significantly each year until a substantial drop in 2019. Unfortunately, during the coronavirus lockdown, records of dog theft once again skyrocketed.

According to statistics, there was a double-digit increase in canine thefts across the UK from January to July 2020 compared to numbers from the same dates recorded the previous year, 2019.

In addition to this, the areas that saw the highest increases in dog theft were Northumbria, Devon, Cornwall, and Leicestershire – why these particular counties were so popular amongst thieves wanting to kidnap dogs remains unclear.

When it comes to actual numbers, figuring out how many dogs are stolen in the UK every year can prove difficult. However, according to DogLost, a UK charity that specializes in helping victims of dog theft, in 2020, at least 465 dogs were confirmed stolen.

Compared to the previous year, which saw 172 dogs taken from their owners, this is an increase of around 170%.

In addition to this, it is important to remember that the actual figures could be much higher, with some dog owners failing to report the loss of their dog to the charity or local law enforcement. In fact, certain authorities claim that an estimated 2,438 dogs were reported stolen by dog owners across the UK.

Why are dogs being stolen in the UK?

There are several reasons why dogs are being stolen across the UK. In general, most dog thieves target designer dogs and popular breeds to sell them on shady markets or to take advantage of dog lovers who are desperate to own these breeds at a reduced cost.

As well as this, they will also actively target dogs who have not been spayed or neutered to breed them and then sell their litters for large profits. In most cases, thieves will choose to go after younger canines or puppies over older dogs, as the former has the most potential for successful breeding.

Studies have shown that the demand for dogs during the lockdowns in the UK has significantly increased, with many dog lovers deciding to bring a dog into their family whilst stuck at home.

Many thieves have noticed this trend and are actively trying to capitalize on it by stealing dogs.

However, it is as of yet unclear how the loosening of restrictions and the eventual removal of the current lockdown in the UK will affect this – hopefully, the demand for dogs will return to normal, and as a result, the number of thieves stealing them.

Is stealing a dog a crime in the UK?

It is a crime to steal a dog in the UK. Thefts of dogs fall under the Theft Act of 1968, with a maximum penalty of 7 years. However, this type of punishment for stealing dogs is rare.

According to experts, another reason why dog theft is so commonplace is that prison sentences related to committing this crime are shockingly low – with the maximum sentence carrying around seven years.

Prison sentences themselves are rare, and it is much more common for offenders to be given a fine and community service. For this reason, many thieves are not afraid to steal dogs in broad daylight, often right under the nose of vigilant owners.

Sadly, the risk of being caught is worth the reward for most criminal opportunists, and this has resulted in dog owners sometimes being assaulted in public, particularly if they are elderly or unable to fight back.

Therefore, older dog owners should always be on the alert for news or rumors of dog thefts in their area and act accordingly by asking a younger family member to take their dog for a walk.

Elsewhere on this page you can read my tips that could help you to prevent your dog from being stolen in the future.

What breed of dog is stolen most?

Understanding what breed of dog is stolen most can help owners to decide the steps they need to take to protect their beloved canines from being dog-napped. According to an analysis by Direct Line Pet Insurance, owners of Staffordshire Bull Terriers should remain the most vigilant, with this popular breed being the most at risk of being stolen.

Surprisingly, after Staffordshire Bull Terriers, crossbreeds or mixes are the second most likely to be targeted by opportunistic criminals. However, this could have something to do with the rise in popularity of certain crossbreeds like Cockapoos and Labradoodles.

Spaniels are also another popular choice for dog thieves, with Cocker Spaniels and Springer Spaniels being the third and fourth most stolen dog breeds in the UK.

Lastly, many other popular breeds, such as Dachshunds, Bulldogs, Pugs, Chow Chows, and Chihuahuas are also at risk, making up a significant percentage of the remainder of dogs stolen.

When looking at this list, it is easy to see a clear distinction between the types of dogs that are being targeted, with medium and toy-sized canines being the easiest and most profitable to steal.

Therefore, owners of these breeds must ensure they are vigilant when walking or leaving their dogs at home.

How can you prevent your dog from being stolen?

Thankfully, there are many ways in which you can help keep your dog away from the clutches of greedy criminals. First and foremost, always keep a close eye on your canine at all times.

For example, if you are walking in a park or green space and decide to let your dog off the lead, make sure that they stay very close. Likewise, keep an eye out for any shady characters that could be making a beeline for your dog. Additionally, try and stay within view of other dog walkers and groups of people in the area.

At home, similar rules should apply.

For instance, ensure that your garden is secure (check for gaps in fences, broken locks on gates, or holes) and not accessible by strangers.

Handy Hint: Here’s how to stop your dog from jumping over a fence and escaping from your garden or yard.

Likewise, keep an eye on your dog when it spends extended periods outside by itself. If a dog is stolen in your area, be extra vigilant and only take your dog out into the garden when you can closely supervise it.

Similarly, do not open your door to any strangers you do not recognize and report any vehicles that seem to be patrolling the area and stopping near gardens and other areas where dogs are located.

When in public, be wary of people who approach and ask questions about your dog or try to take a photo of them, this a common ruse used to distract dog owners.

Lastly, never leave your dog unintended in the car or tethered outside shops. In vehicles, dogs are sitting ducks for opportunistic thieves, as they can easily break car windows that have been left ajar. (You might want to consider a dog seat belt so they are more secure from theft).

This is particularly true in quiet or residential areas.

When it comes to leaving your dog tied up outside while shopping, all it takes is a confident thief to untie their leash and make off with your pooch as if they are its owner – most people will be unaware of the crime that has just occurred.

And just one other thing too… make sure you insure your dog. Here’s how dog insurance for theft works.

For example, where I live, there have been social media posts about dogs being stolen, which the local police have had to comment on to debunk. Unfortunately some people like to spread fear that your dog is going to get stolen.

That’s not say it’s not a risk. It is. So be diligent and safe.